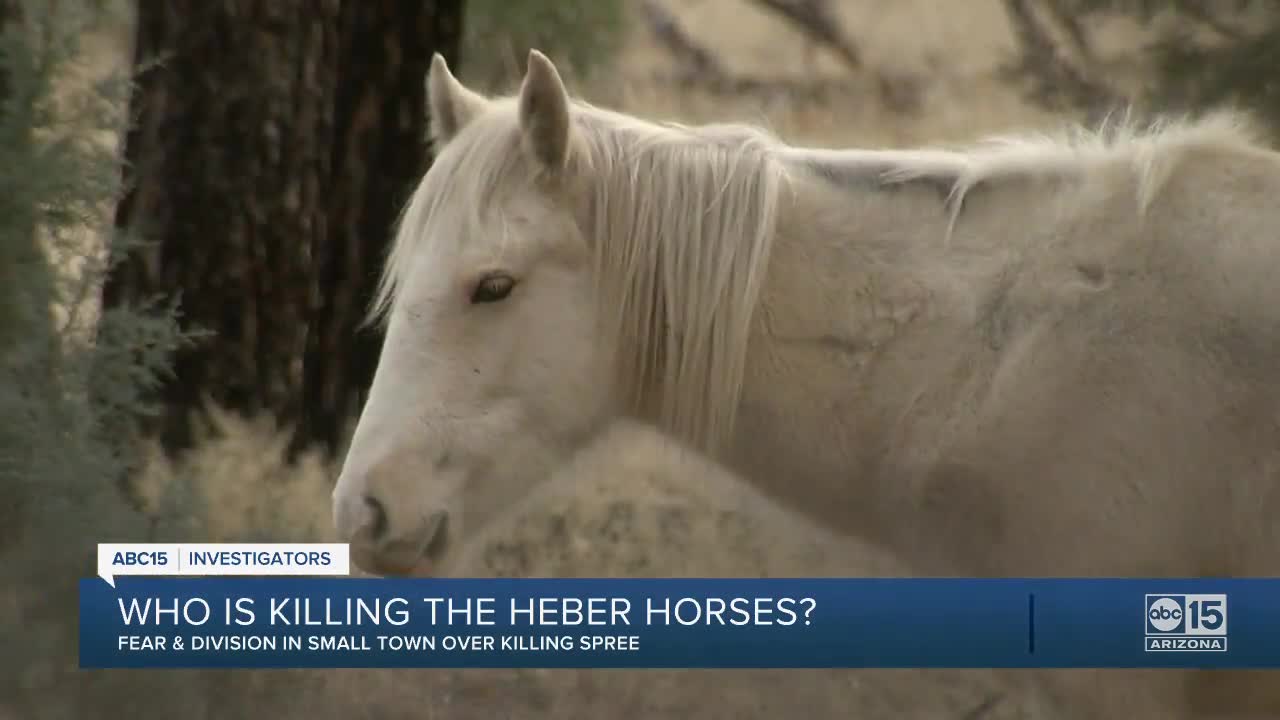 Who is behind a violent killing spree of wild horses, taking place in the Heber-Overgaard area? It is a mystery that has a community frustrated, angry, deeply divided, and some even living in fear of their own safety. 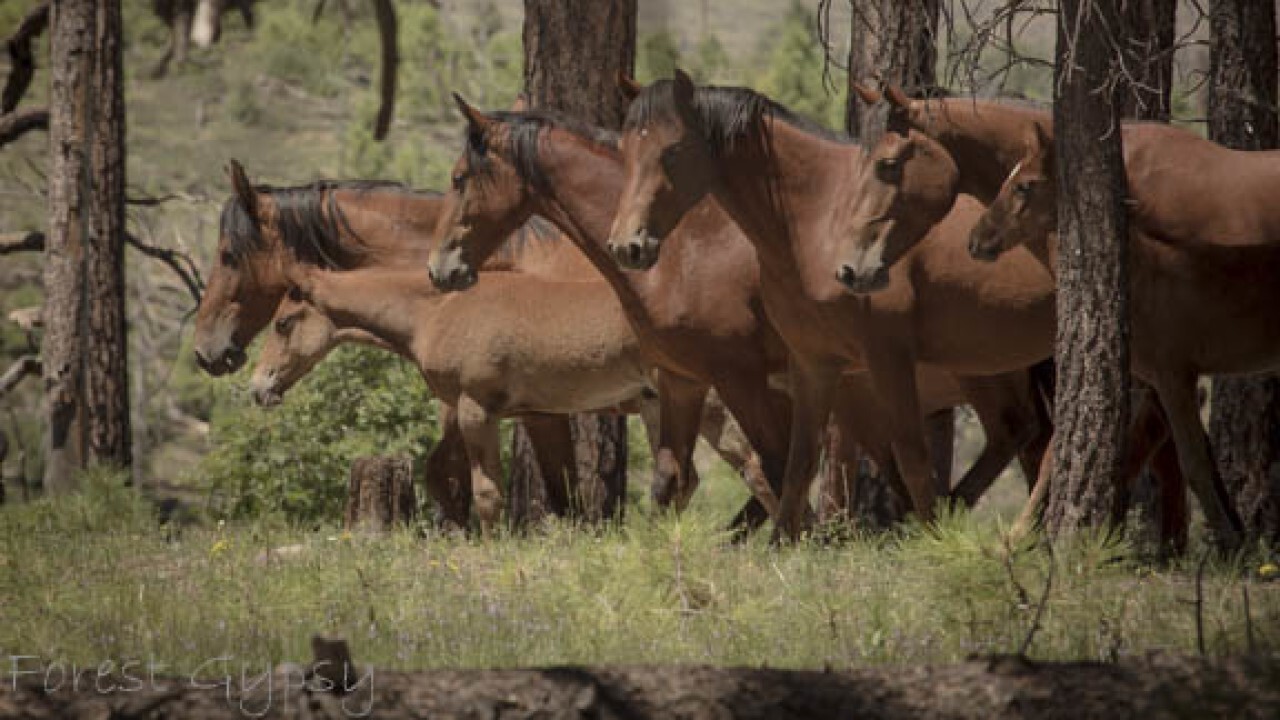 HEBER-OVERGAARD, AZ — Who is behind a violent killing spree of wild horses, taking place in the Heber-Overgaard area?

It is a mystery that has a community frustrated, angry, deeply divided, and some even living in fear of their own safety.

Despite local forest service officials telling community members there is no threat to human life, some in the community scoff at that answer, saying it's obvious, a sociopath with no remorse for innocent animals is boldly taking lives on federal land, how can they not live in fear?

Many advocates who have been demanding action by local, state, and federal officials tell ABC15 they have received dozens of threats in person, and through social media from people in the community telling them to "keep their mouths shut.” Some of them were veiled threats that included pictures of the outside of their homes, or their pets.

One message a Heber horse advocate received included recipes for dishes including horse meat. Another who asked ABC15 not to use her name said she had had people come up to her in public places and "get in her face" over her horse advocacy.

One person even spat on her while she was in line at a local gas station.

Kathleen Lewis, a Heber resident says she decided to get involved in advocating for the horses and being their voice after the mass killing of 15 horses in the Apache-Sitgreaves National Forest last month.

These horses that included several foals took place in the Black Mesa Ranger District outside of the Heber Wild Horse territory and the Bison Ranch area near Forest Road 144.

What was different about these horse killings was not just the sheer numbers found dead at once.

"This was a group shooting. A complete band was shot," said Mary Hauser, a member of the Heber Wild Horse Freedom Preservation Alliance, as she broke down in tears.

"Unfortunately in my mind, there is a very sick person out there who is doing this. They are killing innocent animals," said Hauser.

ABC15 is hearing from several horse advocates who tell us they are being harassed by other community members in Heber-Overgaard for their stance on protecting the Heber wild horses.

Lewis said she had turned all of the threats over to the Navajo County Sheriff’s Office.

"We are the community that helps each other, works hard, and we are tired of being attacked over these horses," said Kathy Gibson Boatman, who came from an eighth-generation cattle farming family in the community.

Gibson said many horse advocates in the community believed ranchers may be behind mysterious horse shootings in the forest, and that is because many in the ranching community had made it no secret, they wanted the Heber horses gone.

The horses were grazing on land they wanted for their cattle and ranchers considered them a pest, but Boatman said ranchers did not support shooting horses to get rid of them.

Boatman said ranchers also felt the horses in question did not qualify as "federally protected horses," as they had intermingled with other domestic species. She called them all "domestic horses."

Regardless of the horse’s lineage, the fact that could not be ignored here, is that someone was shooting and killing animals on forest land. They wanted to see the forest service step in to manage the herds, and thin the population of horses.

Ranchers supported bring back horse "round-ups" that they said have been taking place in the community for generations before animal activists sued to have them stopped.

"Prior to this love affair with this herd of horses they would gather the horses, they would round them up, and they would slaughter them," said Boatman.

She stressed ranchers did not support shooting and killing horses.

"There are laws that say you cannot do that, but unfortunately you know our Arizona history has shown us, when the law- the authorities don't do the proper thing, unfortunately sometimes people take vigilante justice. They do," said Boatman.

She also theorized that horse advocates themselves could be behind the killings.

"These activists, I'm concerned they could be the ones doing it, to bring notoriety to the horses. They benefit from it, they fundraise off of it. They inflame the general public about the whole situation, so you know, I've wondered. I've wondered," she added.

ABC15 reached out to the U.S. Forest Service to find out what's being done to find the killer of these wild horses?

A spokesperson sent us this statement:

"USDA Forest Service Law Enforcement & Investigations responded to the incident on January 9th, after a forest visitor reported the deceased horses to Arizona’s Department of Game and Fish. On January 10th, the Forest Service deployed additional law enforcement and equine experts to investigate the deaths and collect evidence. At this time, the Forest Service is offering up to $5000 for information that leads to the arrest and conviction of those responsible for the illegal killing of the horses found on the Apache-Sitgreaves National Forest. If members of the public have any tips, they should contact the Navajo County Sheriff’s Office tip line at 1-800-78 CRIME (27463). Information from tips is helpful and we follow up on all leads.

To investigate this type of incident, Forest Service Law Enforcement & Investigations collaborates across jurisdictions and uses all the available tools. While criminal investigations are ongoing, it is common that not all facts can be released immediately. However, we remain as open and transparent as possible and will update information as it becomes available. The best place to find up to date information is at fs.usda.gov or follow the Apache-Sitgreaves National Forests on Twitter @A_SNFs.

ABC15 has also asked the forest service to clarify if the Heber horses "federally protected." Here is the response:

"The Wild Horses and Burros Protection Act of 1971 protects unmarked and unclaimed horses and their progeny that were considered wild and free roaming on public lands at the time of passage of this legislation. After this law was passed, the Heber Wild Horse Territory was established. Therefore, all unmarked and unclaimed horses in the territory are protected. When we observe a marked horse, we report it to the Arizona Livestock Board which identifies and contacts the owner. When a horse is unmarked but a party claims ownership, the owner can pick up the horse from the territory."

The forest service is expected to release a horse management plan later this week. To learn more about the Heber horses visit heberwildhorses.com or heberhorsecollaborative.asu.edu.