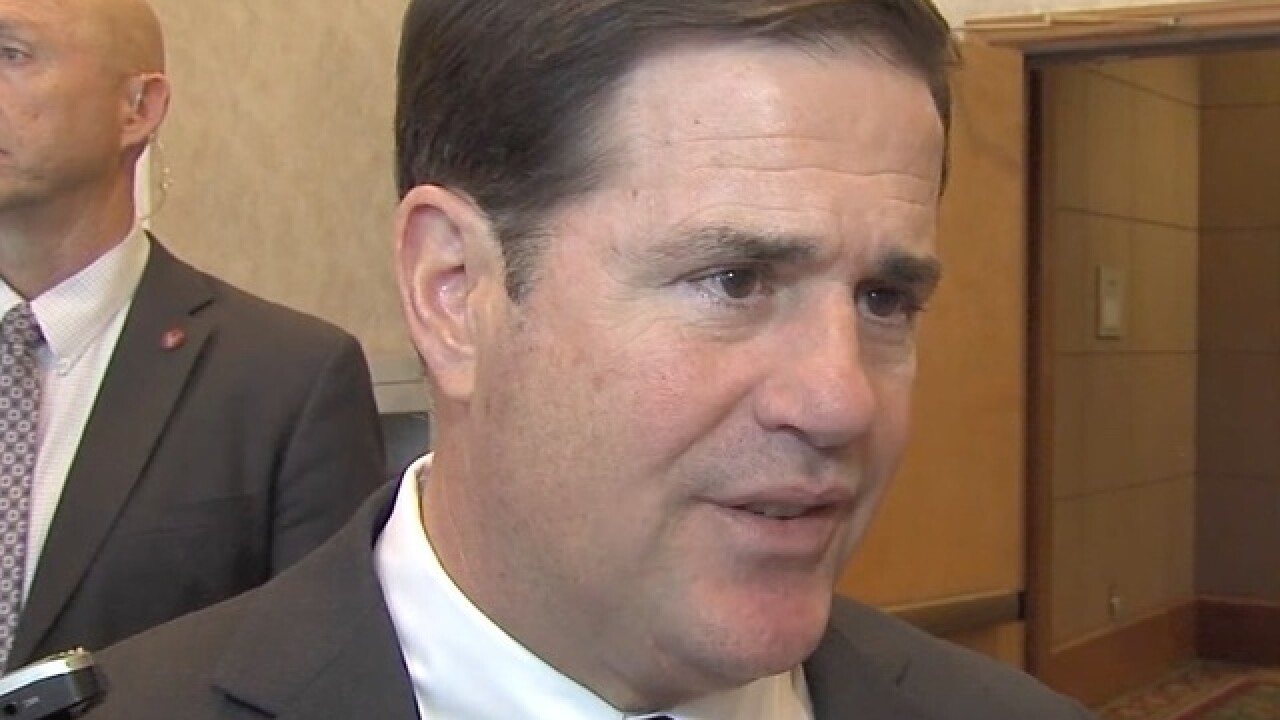 Arizona Gov. Doug Ducey's spending proposal for the coming fiscal year skips his previous practice of sprinkling new K-12 education spending among a series of small initiatives, instead focusing nearly all the new cash into three big pots of money designed to restore cuts he himself helped to enact.

The budget plan release Friday pushes $100 million into a funding stream that pays for school capital costs as part of five-year plan to fully restore $371 million in cuts made since the Great Recession. More than $117 million of those capital cuts occurred under Ducey's first spending plan in 2015. He also wants $35 million in new cash for building overhauls and another $88 million for new school construction.

The Republican governor touted the new spending on  computer software, textbooks and other so-called "soft capital," needs earlier this week, but education advocates slammed it as too little when K-12 school receive much less now than they did pre-recession.

The state is being sued by a group of schools, education groups and citizens for cuts that forced schools to use operations cash for the capitol cuts, and a judge in Phoenix was set to hear the first arguments in the case Friday. Ducey says his new spending should be enough to settle the case.

In all, the $10.1 billion plan for the budget year that begins July 1 boosts spending by more than $300 million over the current budget. The 3.2 percent spending boost is below the combined metric of inflation plus population growth.

Much of the new spending is possible because of a combination of rising state revenue, transfers from other funds, eliminating funding for vacant state jobs and other agency savings that adds up to $237 million.

"The governor ran on reducing the size of state government and finding efficiencies," Ducey spokesman Daniel Scarpinato said. "I think it says a lot about the culture that we've created in this government that we went in partnership to our agency directors and said we want to put more money toward K-12 education, help us find savings. And they did."

Other key education initiatives identified in the budget plan include $34 million for the second year of a teacher raise enacted last year, bringing the total raise to 2 percent. In addition, the  budget plan puts that case into base school funding, making it permanent and eliminating criticism that they raises were merely a one time "stipend." He also wants $8.1 million for new teachers for deaf and blind students, a computer science pilot program and expanding early literacy.

Universities will see essentially flat spending, but the budget includes the $27 million promised to pay interest on a $1 billion construction bond package approved last year and $8 million in extra capitol and operations cash.

The governor also hopes to save $2.5 million a year by eliminating three-month retroactive coverage for Arizonans who are identified as eligible for the state's Medicaid program during a hospital visit. They instead want that coverage only to cover the current month. The state applied to the federal government this week for a waiver to enact that plan.

The cut will mainly affect hospitals, but Scarpinato said it should not harm patients.

Ducey also wants to bring in  $55 million by boosting tax collection enforcement, including paying a contractor to mine data that would identify tax cheats and hiring 25 new auditors. The move comes nearly two years after the state Department of Revenue laid off 50 workers, including many auditors. The layoffs led to warnings about lost tax revenue from Democrats and an economist who advises the state.

Scarpinato declined to say if the decision to boost the ranks of auditors to bring in $25 million in additional tax collection is an admission that the layoffs were a mistake.

"I would acknowledge that there are more dollars to be had moving forward," he said.