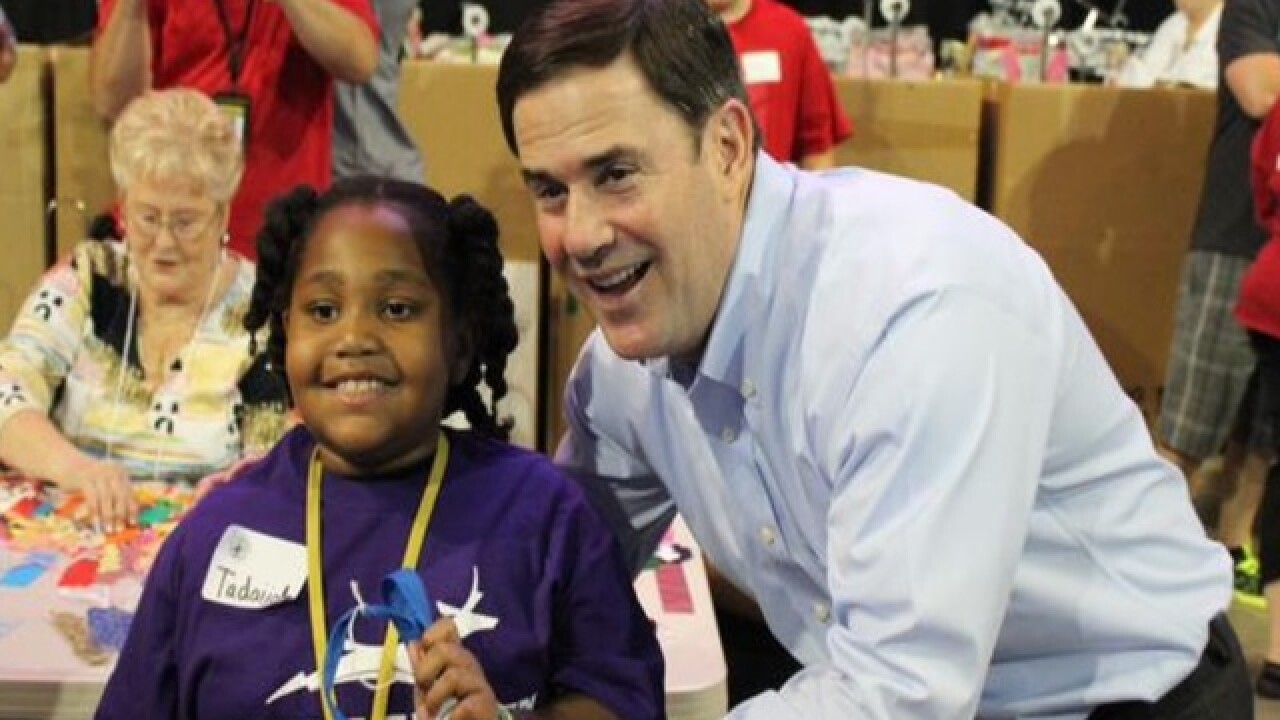 Arizona Gov. Doug Ducey on Tuesday said he plans to add $100 million in new K-12 education funding this year as a down-payment on the full restoration of a school capital funding formula that was slashed during the Great Recession.

Ducey called for funding to increase to $371 million in five years. The Republican governor made the announcement at a Capitol news conference attended by lawmakers, school district superintendents and other education officials.

He called his plan an investment that schools can use how they like, including teacher pay, that has support from education officials who attended.

"Look at the coalition that we've built here," he said. "This is coming together around available resources that we're going to bring to our schools in Arizona that are permanent and flexible and can be used for both capitol and teacher salaries."

Ducey also proposed to spend nearly $52 million this coming budget year on building rehabilitation and to use new bonding to pay for five new schools costing $88 million. All three pots of money have been greatly underfunded for years.

The state is being sued by a group of schools, education groups and citizens for cuts that forced schools to use operations cash for capital costs like computer software, textbooks and other so-called "soft capital" needs. The suit, filed in April, alleges the state illegally cut capital funding and could owe as much as $2 billion.

Ducey says he wants lawsuit settled, but that's not likely, according to one of the plaintiffs.

"I don't think what the governor's doing even addresses the lawsuit,' said Joe Thomas, president of the state teachers' union, the Arizona Education Association. "The lawsuit's around the unconstitutional nature of how we fund schools, not the level we're funding them at."

An Avondale woman who is a plaintiff in the lawsuit said she would drop out if the governor's plan is enacted.

"I understand that what the governor's proposing doesn't fully address all of those things," Jill Barragan said. "I see that he opened a huge door here for us, and we need to take that opportunity to walk in."

Some school advocacy groups were "cautiously optimistic" about the proposal, as was a Democratic lawmaker, Rep. Randy Friese of Tucson. He said he could be supportive if the cash didn't "compromise" other priorities.

Other education advocates, however, were not pleased. A coalition of groups called AZ Schools Now last week called for $1.1 billion a year in new school funding to bring the state's K-12 schools back to where they were before the recession.

Dawn Penich-Thacker, a spokesman for Save Our Schools and a member of the coalition, said the proposal falls well short of what's needed.

"It's inadequate. It's not enough funding and it's not soon enough," Penich-Thacker. "This is literally a single-digit percentage of what we lost from the public education system.

She also said the governor was being disingenuous when he said the spending would be new money or an increase. "

"This is simply paying back funds that used to be there a decade ago," she said.

Ducey was asked at the news conference how he could tout $100 million in restored funding as a win for schools that advocates say need $1.1 billion to get back to pre-recession levels. He pointed to the Great Recession, which forced major cuts across state government.

"I think somehow in these questions there's some discussion as if there were never a budget shortfall, as if the state never ran out of money," he said. "You've heard that these are more dollars being brought forward than folks have seen in a decade."