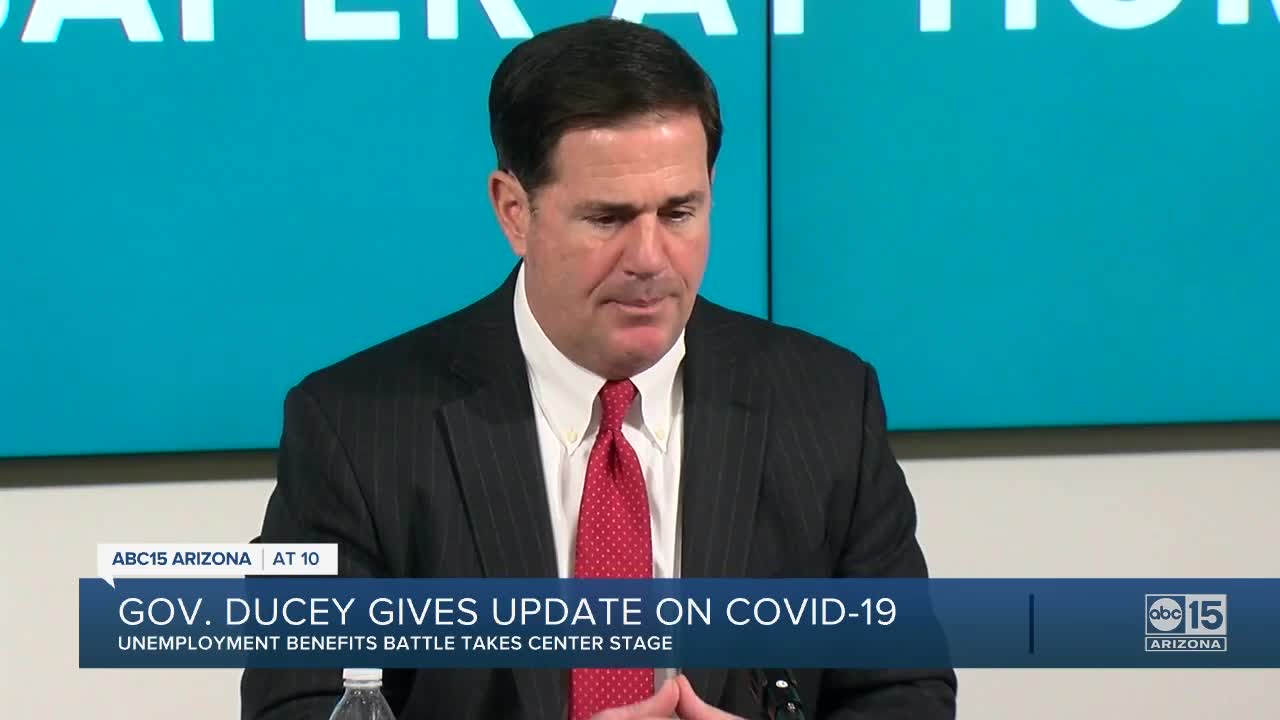 For the past four months, most unemployed Arizonans have been getting $840 dollars a week. Starting Friday though, $600 in federal cash is disappearing.

For the past four months, most unemployed Arizonans have been getting $840 dollars a week. Starting Friday though, $600 in federal cash is disappearing.

Arizona is almost dead last when it comes to these benefits. Only one state is worse - Mississippi.

Governor Ducey did not want to talk about unemployment Thursday.

"Arizona is going to do its part to do what's necessary we're gonna need cooperation from Congress. Like I said, we don't create money at the state level, we're not in a position today, especially during a pandemic to be borrowing money," said Gov. Ducey.

"Well how about raising the unemployment benefits for Arizonans which haven't been raised since 2004?" asked Howie Fischer, with Capitol Media Services.

"Howie, we've been working with the federal government on this," said Governor Ducey.

Congress though, recently left Washington without a deal to help the millions of unemployed Americans. In Arizona, where benefits are meager, the governor essentially said to the jobless, 'wait on the federal government,' even though he has the power to call a special session and ask for an increase in the benefits.

"We've worked very hard to make sure that Arizonans have the resources that are necessary and that people are not losing the place where they live, or their home in this setting," said Gov. Ducey.

The eviction ban ends October 31st, and unemployed Arizonans like Randy Mayes worry there will be a crisis.

"If they're not working and they don't have the money in their pocket to pay that rent, the problem is going to explode, even if they moratorium ends," said Mayes.

Something more urgent, but with equal uncertainty, is the impending school year.

School districts will have ten days to digest the data, and decide whether to postpone in-person classes or power through.

"People are desperate for any way to push back right now. But it is difficult. We have asked," said Jake Frantz, a high school teacher and President of the Queen Creek Education Association.

Queen Creek teachers have expressed their safety concerns about the district's eagerness to fill classrooms, but it is a complicated issue.

"There are parents that can't wait for the first day of in-classroom instruction," said Governor Ducey.

When asked about high school sports starting back up, Governor Ducey said he is leaving that decision up to individual districts, even though his top health officials acknowledged the risks.

"So non-contact sports can play right now. That is a lower risk," said Dr. Cara Christ. "If they're going to do contact sports, they're going to want to take into account what the transmission is in that and that's where also the benchmarks will come in, but it is left up to the schools and the local health departments."

While Arizona's numbers are moving in the right direction, the state has been plagued with testing issues and prolonged delays for results.

"It's unacceptable," said Ducey, speaking about the 14+ day delays. "Sonora quest needs to step up their game...we are having very candid discussions.

If you are interested in getting tested, visit: http://azhealth.gov/COVID19testing