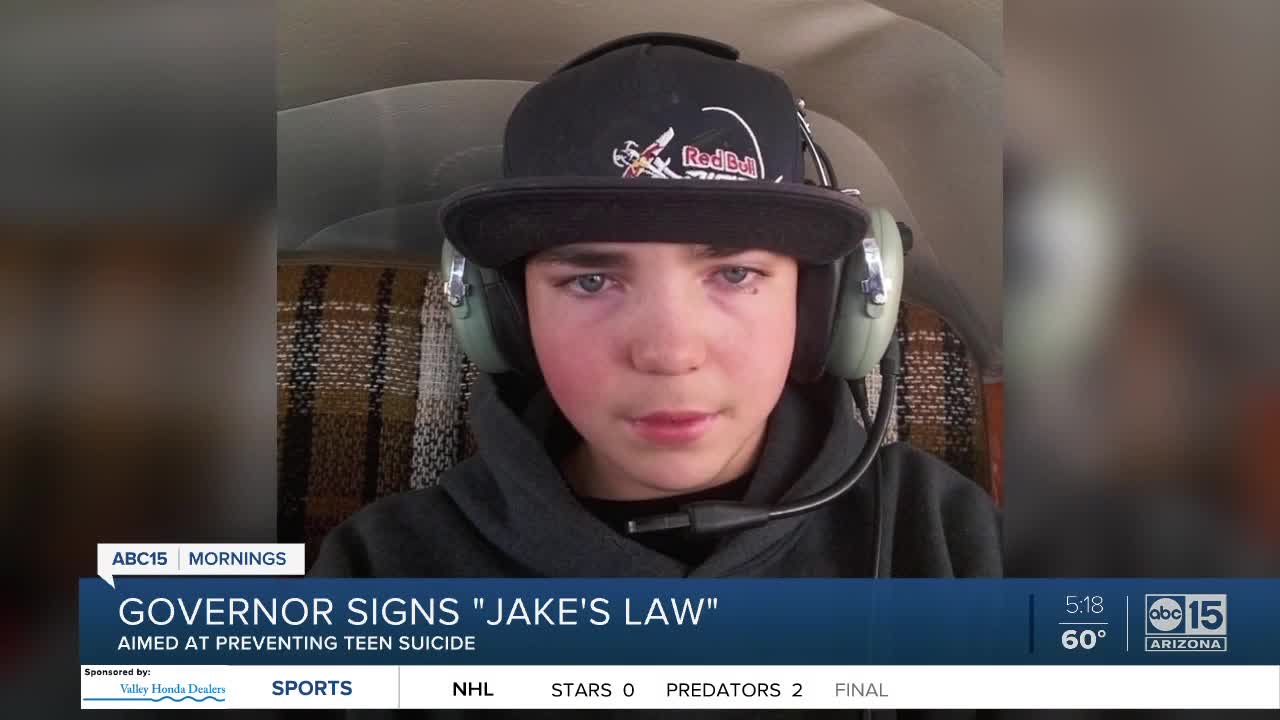 The omnibus healthcare law enables the 'parity' laws that have been federally established to be followed in Arizona when it comes to insurance carriers. The law is named after Jake Edward Machovsky who died by suicide in 2016.

The law is meant to hold insurance companies accountable to treating mental health just as they would any other physical ailment.

"What we do won't bring Jake back, but we can make sure it doesn't happen to anybody else," says Denise Denslow, Jake's mother.

The Denslows say their son Jake started suffering from depression after turning 13 years-old.

When they lost their son in January of 2016, their world crumbled. "People always think 'not me not my kid', we used to think the same thing," says Ben Denslow, Jake's father.

The Denslows say they tried every type of help for their suicidal son. Seeking medication, behavioral health facilities, counseling, among others.

"He had a good social life, we tried to get him care; he had a loving family and he still struggled," adds Denise.

Eventually during the course of his depression and suicidal ideation, Jake stayed at a mental health facility.

"Basically twice in a span of 5 weeks both times they only kept him for 5 days," adds Denise.

After losing Jake, the Denslows discovered the insurance carrier failed to abide by federal parity laws, meaning treating suicide ideation like any other physical illness.

AFTER LOSING JAKE-- HIS PARENTS DISCOVERED THE INSURANCE CARRIER HAD FAILED TO ABIDE BY FEDERAL PARITY LAWS- MEANING TREATING HIS SUICIDE IDIATION LIKE ANY OTHER PHYSICAL ILLNESS.

"We can tell you for a fact that the insurance company that provided Jake care was not following parity because if they were he would have never been released," adds Denise.

The Denslows could have sued the insurance company but instead decided to go the legislative route by asking legislators to create this law to hold the companies accountable.

*ALLOCATES $300,000 TO THE DEPARTMENT OF EDUCATION FOR RESEARCH ON BEST PRACTICES FOR MENTAL HEALTH IN SCHOOLS.

"If the child is in crisis or they are struggling and maybe there's a gap between their insurance coverage or maybe they are not contracted they can access this $8M fund to bring that gap," adds Denise.

The Denslows say the law won't bring back their son, but they do want to make sure that another family is spared from having to suffer the pain of losing a son or a daughter to suicide.

For more information on the Denslows non-profit to help parents and caregivers provide resources to someone dealing with a mental health illness, you can reach them here JEM Foundation