Cuba's Fidel Castro, who defied US for 50 years, has died 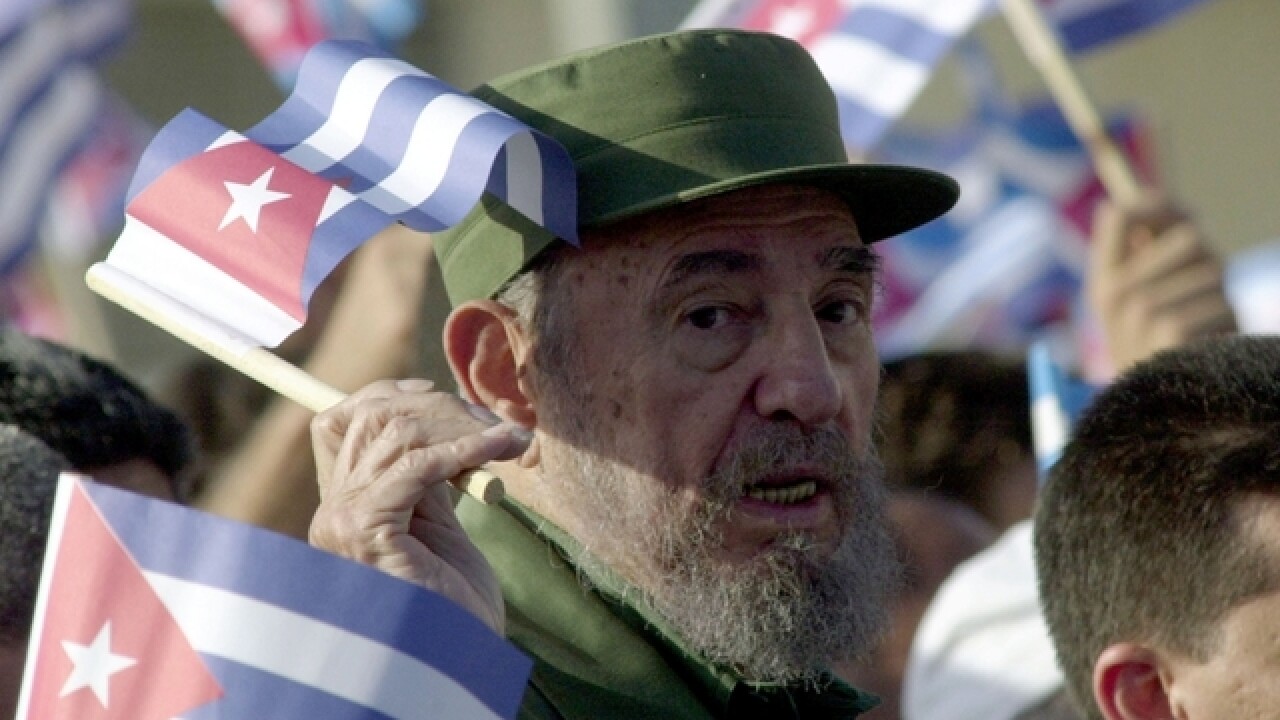 By: Associated Press
Posted at 10:43 PM, Nov 25, 2016
Former President Fidel Castro, who led a rebel army to improbable victory in Cuba, embraced Soviet-style communism and defied the power of 10 U.S. presidents during his half century rule, has died at age 90.
Castro's reign over the island-nation 90 miles from Florida was marked by the U.S.-backed Bay of Pigs invasion in 1961 and the Cuban Missile Crisis a year later that brought the world to the brink of nuclear war. The bearded revolutionary, who survived a crippling U.S. trade embargo as well as dozens, possibly hundreds, of assassination plots, died eight years after ill health forced him to formally hand power over to his younger brother Raul, who announced his death late Friday on state television.
Castro overcame imprisonment at the hands of dictator Fulgencio Batista, exile in Mexico and a disastrous start to his rebellion before triumphantly riding into Havana in January 1959 to become, at age 32, the youngest leader in Latin America. For decades, he served as an inspiration and source of support to revolutionaries from Latin America to Africa.

His commitment to socialism was unwavering, though his power finally began to fade in mid-2006 when a gastrointestinal ailment forced him to hand over the presidency to Raul in 2008, provisionally at first and then permanently. His defiant image lingered long after he gave up his trademark Cohiba cigars for health reasons and his tall frame grew stooped.
"Socialism or death" remained Castro's rallying cry even as Western-style democracy swept the globe and other communist regimes in China and Vietnam embraced capitalism, leaving this island of 11 million people an economically crippled Marxist curiosity.
He survived long enough to see Raul Castro negotiate an opening with U.S. President Barack Obama on Dec. 17, 2014, when Washington and Havana announced they would move to restore diplomatic ties for the first time since they were severed in 1961. He cautiously blessed the historic deal with his lifelong enemy in a letter published after a month-long silence.

President Obama says the United States is extending "a hand of friendship to the Cuban people" at the time of Fidel Castro's death.

Obama says in a statement that "history will record and judge the enormous impact of this singular figure on the people and world around him."

The U.S. president notes that "discord and profound political disagreements" marked the relationship between the United States and Cuba for nearly six decades, and says he has "worked hard to put the past behind us."

Obama says that in the coming days, Cubans "will recall the past and also look to the future. As they do, the Cuban people must know that they have a friend and partner" in America.