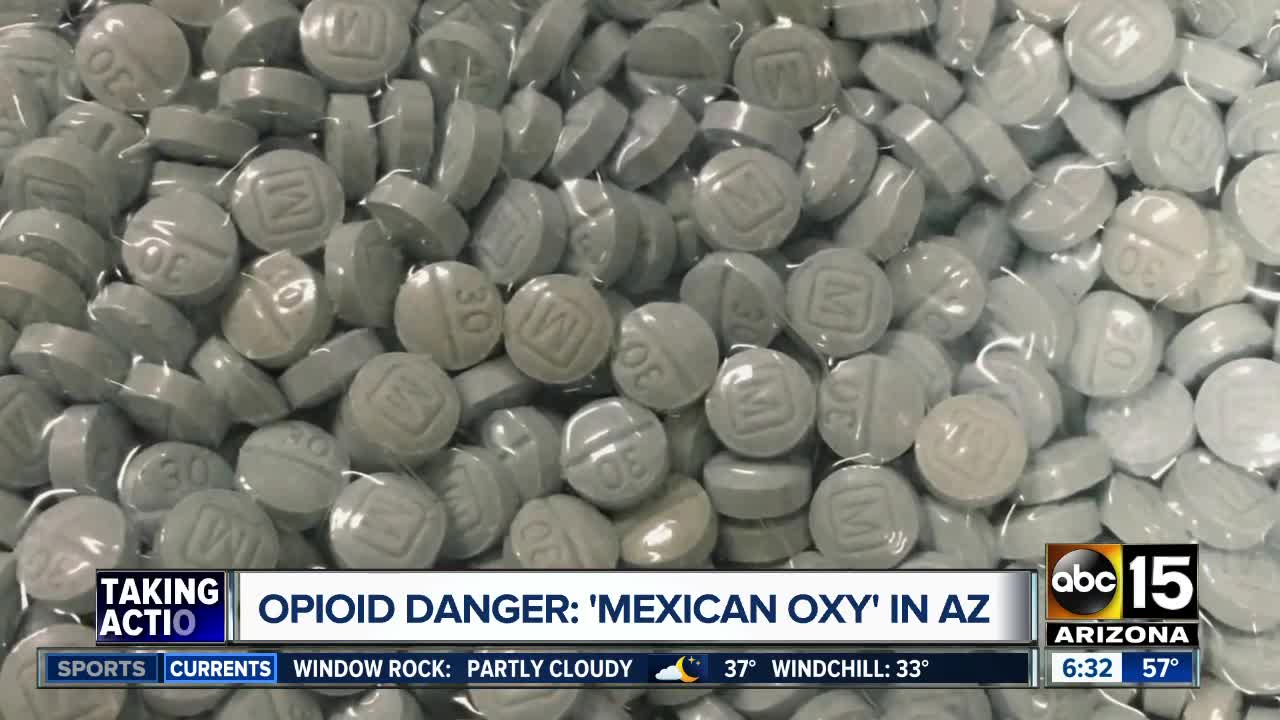 Aaron Francisco Chavez swallowed at least one of the sky blue pills at a Halloween party before falling asleep forever.

TUCSON, AZ — Aaron Francisco Chavez swallowed at least one of the sky blue pills at a Halloween party before falling asleep forever.

He became yet another victim killed by a flood of illicit fentanyl smuggled from Mexico into the Southwest -- a profitable new business for drug gangs that has pushed the synthetic opioid to the top spot for fatal U.S. overdoses.

Three others at the party in Tucson also took the pills nicknamed "Mexican oxy" and police flagged down by partygoers saved them by administering naloxone overdose reversal medication. But the treatment came too late for Chavez, who died at age 19.

The four thought they were taking oxycodone, a much less powerful opioid, investigators believe. The death of Chavez and many others, officials said, illustrate how Arizona and other southwestern states bordering Mexico have become a hot spot in the nation's fentanyl crisis. Fentanyl deaths tripled in Arizona alone from 2015 through 2017.

"It's the worst I've seen in 30 years, this toll that it's taken on families," said Doug Coleman, the U.S. Drug Enforcement Administration special agent in charge of Arizona. "The crack (cocaine) crisis was not as bad."

With plenty of pills and powder sold locally out of the arriving fentanyl shipments that are also distributed around the U.S., the drug that has surpassed heroin for overdose deaths has touched all Arizona demographic groups. Chavez' family says he was working at a restaurant as a prep cook with dreams of becoming a chef and trying to turn his life around after serving prison time for a robbery conviction.

Also killed in the state over the last year by the pills that go for $9 to $30 each were a 17-year-old star high school baseball pitcher from a Phoenix suburb and a pair of 19-year-old best friends and prominent former high school athletes from the mountain town of Prescott Valley. The parents of one, Gunner Bundrick, said their son's death left "a hole in our hearts."

Popping the pills at parties "is a lot more widespread than we know," said Yavapai County Sheriff's Lt. Nate Auvenshine. "There's less stigma to taking a pill than putting a needle in your arm, but one of these pills can have enough fentanyl for three people."

Stamped with "M"on one side and "30" on the other to make them look like legitimate oxycodone, the pills started showing up in Arizona in recent years as the Sinaloa cartel's newest drug product, said Tucson Police Lt. Christian Wildblood.

The fentanyl that killed Chavez was among 1,000 pills sneaked across the border crossing last year in Nogales, Arizona by a woman who was paid $200 to tote them and gave two to Chavez at the party, according to court documents. It's unknown if he took one or both.

At the same crossing last month, U.S. officials announced their biggest fentanyl bust ever -- nearly 254 pounds (115 kilograms) seized from a truckload of cucumbers, enough to potentially kill millions. Valued at $3.5 million, most was in powder form and over 2 pounds (1 kilogram) was made up of pills.

The tablets in most cases are manufactured in primitive conditions with pill presses purchased online and the amount of fentanyl in each pill can vary widely, Wildblood said.

"There is no quality control," he said.

While Chinese shipments were long blamed for illegal fentanyl entering the U.S., Mexico's Army in November 2017 discovered a rustic fentanyl lab in a remote part of Sinaloa state and seized precursors, finished fentanyl and production equipment -- suggesting some of it is now being synthesized across the U.S. border.

Most fentanyl smuggled from Mexico is about 10 percent pure and enters hidden in vehicles at official border crossings around Nogales and San Diego, Customs and Border Protection data show. A decreasing number of smaller shipments with purity of up to 90 percent still enter the U.S. in packages sent from China.

Although 85 percent of the fentanyl from Mexico is seized at San Diego area border crossings, the U.S. Drug Enforcement Administration's 2018 National Drug Threat Assessment said seizures have surged at Arizona's border and elsewhere around the state.

The Sinaloa cartel's ability to ramp up its own production of fentanyl and label it oxycodone shows the group's business acumen and why it remains among the world's top criminal organizations, despite the conviction in New York this week of cartel kingpin Joaquin "El Chapo" Guzman Loera, Coleman said.

"If they see a market for their stuff, they'll make it and bring it up," he said.

The Centers for Disease Control and Prevention says fentanyl is now the drug involved in the most fatal overdoses in the U.S., with fatalities from synthetic opioids including fentanyl jumping more than 45 percent from 2016 to 2017, when they accounted for some 28,000 of about 70,000 overdose deaths of all kinds.

Fentanyl was also involved more than any other drug in the majority of overdose deaths in 2016, the year the pop artist Prince died after taking fake Vicodin laced with fentanyl. Heroin was responsible for the most drug overdose deaths each of the four years before that.

CDC figures for Arizona show the statewide deaths involving synthetic opioids excluding methadone, largely from fentanyl, rose from 72 in 2015 to 123 in 2016 and then skyrocketed to 267 in 2017.

In the first federal conviction of its kind in Arizona that linked a death to distribution of any drug, a woman from a Phoenix suburb last year got 12 years in prison for selling fentanyl tablets that killed a 38-year-old Arizona man.

And in Tucson, Chavez' relatives wonder why the woman accused of smuggling the pills across the border allegedly decided to hand them out at the party, saying they were Percocet, which contains oxycodone and acetaminophen, and "something else," according to court documents.

The woman, Jocelyn Sanchez, denied describing them that way and was charged with transporting and transferring narcotics. Her lawyer, Joel Chorny, declined to discuss the case.

Nicknamed "Sonny Boy," Chavez was the third of 10 children born to Leslie Chavez, who was brought to the U.S. as an infant and deported back to Mexico last year, two months before he died. In a phone interview, she said Mexican officials arranged to have her son's body brought across the border so she could say goodbye.

She said she had "heard about how these pills were killing people" but never thought it would happen to one of her children.

Chavez had a 2-year-old daughter and despite his robbery conviction "was trying to get his life together, he was trying to be good" for the toddler, said his sister, Seanna Leilani Chavez.

The dealers, she said, are only interested in profits.

"They will sell you poison, take your money, and not think twice about how they could possibly be killing someone's son, father, brother or grandson," she said.