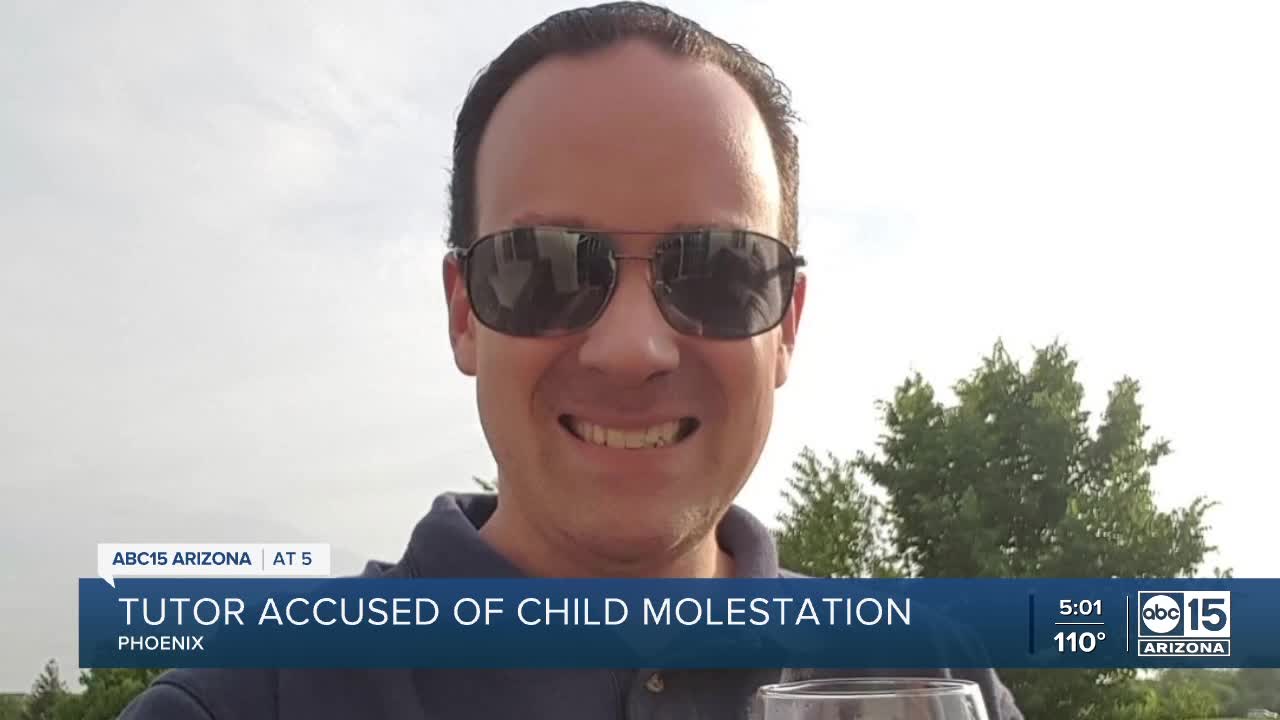 DPS is warning parents of a Valley tutor with an alleged history of child molestation, claiming to have a fingerprint clearance card.

PHOENIX — The head of the Arizona Department of Public Safety is encouraging parents whose children had contact with a Valley tutor to get in touch with law enforcement, as the DPS director filed a lawsuit against a fellow state agency reference efforts by the alleged child predator to obtain a fingerprint clearance card.

DPS Director Heston Silbert filed a lawsuit against the Arizona Board of Fingerprinting. The lawsuit claims the board granted an exemption, called a "good cause exception," for Brett James Smith, despite the objection of DPS. According to the lawsuit, Smith, 37, previously had the last name Zagorac and has been arrested ten times and served prison time for inappropriately touching children.

"His background and his nature are that of a pedophile," Col. Silbert said.

Col. Silbert, who through DPS can issue fingerprint clearance cards, told ABC15 Smith does not currently have a card, despite his claims online. The lawsuit is seeking an order to vacate the fingerprinting board's determination that Smith is entitled to a "good cause exception" and seeks the Board to hold a new hearing.

"He is using the internet and social media to advertise himself as both a swim coach and a...tutor," Col. Silbert said.

According to the lawsuit, Smith was initially denied a clearance card after applying for a "good cause exception" in 2018, when he still had the last name Zagorac. After changing his last name to Smith and applying again in 2019 is when he was able to obtain the exception by the fingerprinting board, over the objections of DPS, according to the lawsuit. The suit notes. "if an applicant demonstrates to the Board that he is 'successfully rehabilitated and is not a recidivist,' the Board may nonetheless grant a good cause exception."

"He wants boys ages five-through-twelve and everything coincided in my 31 years of experience with this man being a prolific pedophile," Col. Silbert said. "He's not going to stop. We certainly should not be facilitating that in any way."

According to the lawsuit, Smith's criminal record includes references to ten arrests and felony child molestation charges that were pleaded down to misdemeanors. The incidents pertain to his time in Indiana and Illinois.

"I would encourage any parent whose child has interacted with this person anywhere, not just in Arizona, anywhere in this country to get in contact with law enforcement," Col. Silbert said.

Since the filing of the lawsuit revealed new details about the tutor, several concerned parents have come forward. The lawsuit notes Smith has a history of using fake names, making it difficult for parents to find his criminal history.

"I have a feeling that the shock is going to turn to anger very soon," said Kim Kriesel.

Kriesel told ABC15 she enlisted Smith as a tutor for her 11-year-old son and said Smith seemed to check all the boxes.

"I looked at his resume and he had four masters degrees, all sorts of endorsements with special ed and giftedness and I just thought he would be ideal," Kriesel said. "And he charges less than a lot of other people out there."

Kriesel told ABC15 Smith worked with her son a couple times a week over the past two months and she did not notice any red flags. However, she said she has since had a talk with her son.

"I asked him to show me on my body where, if anywhere, this tutor had touched him," she said. "He showed me. Thankfully it wasn't in the area of a private part but it was on his bare skin."

According to the lawsuit against the Board of Fingerprinting, Smith is accused of contacting the Chandler Unified School District in an effort to put flyers for his tutoring business into backpacks that are handed out to children and parents. The suit notes he was unable to do so.

"[I am] very angry, disgusted," Kriesel said. "I can't believe there are people like him."

Kriesel told ABC15 she has contacted the Maricopa County Sheriff's Office. While not providing details, MCSO confirmed to ABC15 there "is an open case being investigated which involves a person by the name of B.J. Smith."

Screenshots from earlier this year sent to ABC15 show a "B.J. Smith" soliciting services to tutor or babysit, specifically young boys, in neighborhood groups online in the Valley.

Meanwhile, the executive director for the Board of Fingerprinting declined comment and told ABC15 the individual board members had yet to be served.

If you think your child may have had contact with Smith, DPS urges you to contact local law enforcement.

"My name is Josephine Hallam, of Hallam Law Group PLLC. I am the criminal defense attorney who represented Mr. Smith in his hearing before the fingerprint clearance board. Alexis Brooks, co-counsel on this case, and I submitted legal arguments and full briefings, along with thorough, and voluminous transcripts and records to the fingerprint board before our hearing. Based on the pleadings and the oral argument, the board issued an order for Mr. Smith to receive his fingerprint clearance card.

Let me be clear: BJ Smith has never been convicted of any sex crime. The portrayals of him in the media are completely false and misleading. Mr. Smith has 3 convictions for misdemeanor battery resulting from patting a child on the back during tutoring to signal a job well done. There have never been any allegations of sexual touching or touching of a child’s genitals.

DPS is now smearing Mr. Smith’s name in the media, without knowing the facts or background of his previous case. Additionally DPS is attacking and has filed a legal suit against the fingerprint clearance board, whose function it is to thoroughly review, gather all relevant evidence, and investigate individuals before issuing a fingerprint clearance card.

Mr. Smith has thoughtfully and lawfully proceeded through the requirements of the state of Arizona to receive his fingerprint clearance card. The misleading and false allegations being presented to the media to incite hysteria, by DPS no less, must stop. DPS is creating a false narrative, and in the process, they are destroying a man’s life."