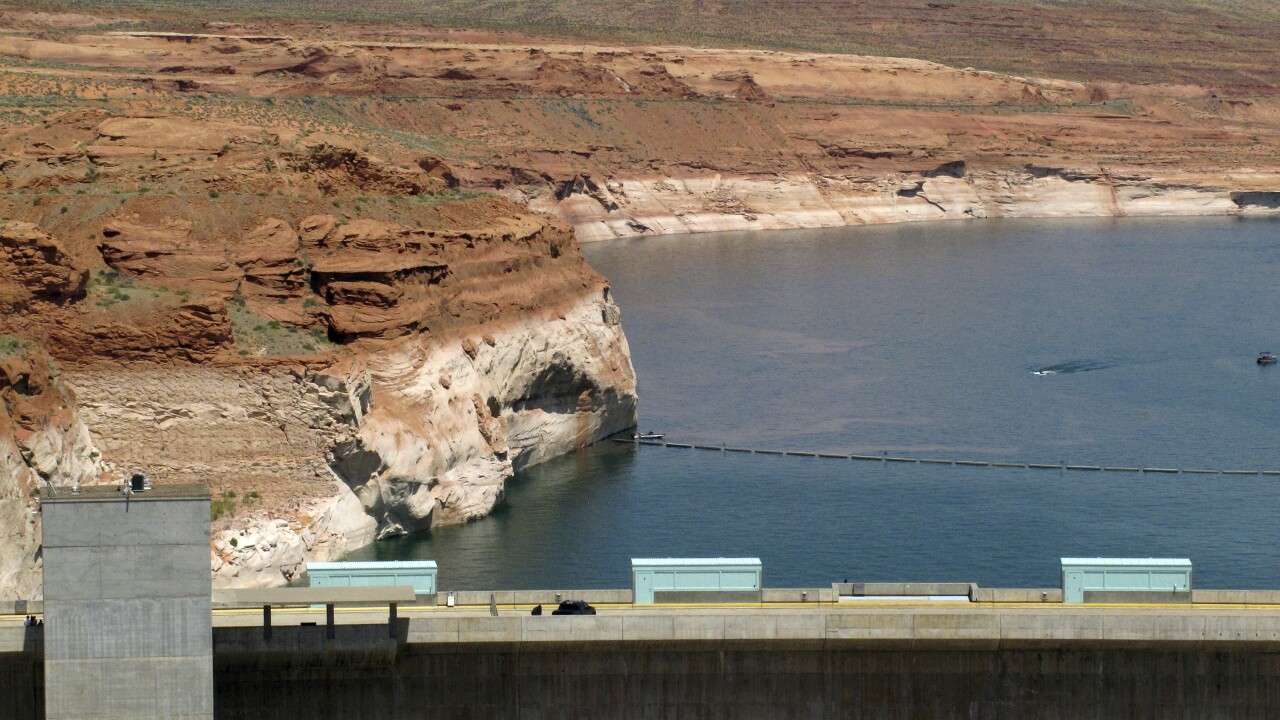 Felicia Fonseca/AP
FILE - In this June 21, 2015, file photo, Lake Powell is viewed behind Glen Canyon Dam near Page, Ariz. Forecasters say this year's outlook for the most important river in the Southwestern U.S. remains grim. The National Oceanic and Atmospheric Administration said Monday that April storms failed to produce much snow in the mountains that feed the Colorado River, and Lake Powell is expected to get only 43 percent of the average inflow from the river. (AP Photo/Felicia Fonseca, File)

PHOENIX — A major Southern California water agency is trying to push the state through a final hurdle in joining a larger plan to preserve a key river in the U.S. West that serves 40 million people.

Most of the seven states that get water from the Colorado River have signed off on plans to keep the waterway from crashing amid a prolonged drought, climate change and increased demands. But California and Arizona have not, missing deadlines from the federal government.

Arizona has some work to do but nothing major holding it back. California, however, has two powerful water agencies fighting over how to get the drought contingency plan approved before U.S. officials possibly impose their own rules for water going to California, Arizona and Nevada.

The Metropolitan Water District is positioning itself to shoulder California's entire water contribution, with its board voting Tuesday on a proposal to essentially write out of the drought plan another agency that gets more Colorado River water than anyone else.

That agency, the Imperial Irrigation District, has said it won't approve the plan unless the federal government agrees to commit $200 million to address the Salton Sea, a massive, briny lake southeast of Los Angeles that has become an environmental and health hazard in the Imperial and Coachella valleys.

The Metropolitan Water District would have to provide what could be nearly 2 million acre-feet of water between 2020 and 2026. An acre-foot serves about one to two average households a year.

That water would be stored behind Lake Mead on the Arizona-Nevada line to keep the key reservoir from dropping to drastically low levels. Water is delivered through Lake Mead to Arizona, California and Nevada.

"The more we delay, the harder it is to hold that deal together," Metropolitan general manager Jeff Kightlinger said.

California isn't required to contribute water under the drought plan unless Lake Mead drops to 1,045 feet (319 meters), which might not ever happen. But if it does, the Imperial Irrigation District said the public would likely demand that it contribute as the agency with the largest and oldest rights to Colorado River water.

"The way to arrive at a resilient and durable drought contingency plan is for the parties to work through the Salton Sea issue, not around it," Imperial general manager Henry Martinez told a Metropolitan Water District committee Monday. "Our two agencies have shown that we can do good things for the river and each other when we take the long view, and that capacity to see past the moment is what's urgently needed now."

The U.S. Bureau of Reclamation has given governors or their representatives in the seven states until March 19 to recommend the next steps after California and Arizona failed to meet its deadlines.

Arizona, Colorado, Nevada, New Mexico, Utah and Wyoming wrote to the Colorado River Board of California over the weekend, urging California to unite with them in seeking authorization from Congress for the drought plans. Without it, the states won't be able to implement the plans, Mexico won't contribute water and the federal government will step in and decide what to do, the states said.

The states and the Bureau of Reclamation said they support Imperial's call for federal funding for the Salton Sea.

Imperial can work on its own timeline for the salty lake because the drought plan isn't expected to negatively affect it, Reclamation Commissioner Brenda Burman said. The irrigation district can sign on now or join in the future, she said.