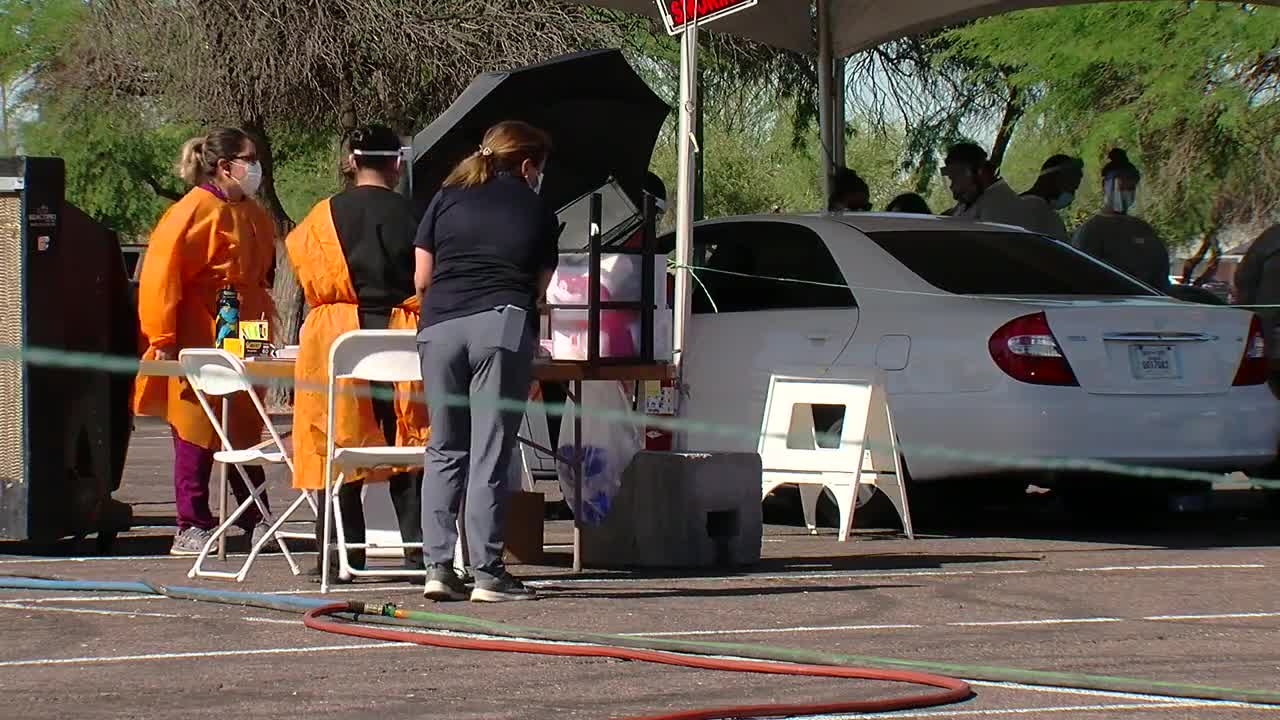 People are waiting hours to get tested, and a week or more to get results back.

As the numbers continue to spike in Arizona, more people are trying to get tested; some want a test for peace of mind and security they are safe to be around loved ones.

While others may have been directly exposed to the virus or are experiencing the symptoms, many are finding it difficult to get a test.

"There's probably very few of us that have not had contact with COVID-19," said Dr. Michael Dunn.

The experts agree that the actual number infected is much higher, but testing has not revealed the true scope.

"The fact that we don't have that is really, it's not only tragic it's pathetic," said Marti Salvato of Tucson.

Salvato says she has been trying to get tested for months now.

"And they said the same thing, 'No it's not needed, you are asymptomatic," she said, referring to her doctor's remarks when she requested a referral. "We were sympathetic to that back in March and April...but we are now in the third week of June. There's really no excuse."

"I can't believe in the midst of a pandemic, when all you see on the news is Arizona's numbers spiking, that it's this challenging to get a test," said Gross, who has underlying health issues, but is more concerned about his cancer-survivor wife's health.

Most people did not expect the process of procuring a test to be difficult, based on the message from the state's top leaders.

"Now, if you want a test, get a test. We've got a test available. We've got over 120-plus locations," said Governor Doug Ducey at his June 11 news conference.

Gross though, who recently found out a co-worker has COVID, has spent all weekend trying to take a test.

"I called CVS and I cannot get an appointment," he said. "I have transportation, I'm able to get somewhere. I have means to pay for a test, if that was required. One way or another I can't get a test."

Hundreds of people waited in line for hours Saturday for a free test in Maryvale. An Arizona Republic reporter tweeted: "After a 13-hour wait, we got tested. We won't get our results until seven days." He is far from alone. Others told ABC15 they have been waiting seven days or more for results.

"I'm not sure how good a positive COVID-19 test does for you in ten days," said Dr. Dunn, noting that the transmission period is thought to be complete at 14 days.

Dr. Dunn runs Gateway Urgent Care in Gilbert, where they have been testing dozens every day.

"We have had a lot of [patients] with very very mild symptoms, [who have been] positive," said Dunn.

The clinic provides patients their results in 48 hours, according to Dunn, but only because his clinic has started working with an 'east coast testing company.' Dunn says the Arizona testing corporations are seeing a backlog and rationing of test kits.

"About two or three weeks ago, when the spike occurred, it feels like we got right back to where we were," said Dunn.

The slowdown statewide and lack of rapid testing will have a real impact on the virus spreading.

"If you don't feel bad, without that positive test, you're probably not going to isolate yourself," said Dunn.

Dunn said the long wait for results will lead to positive Arizonans "spreading the disease" instead of quarantining. It also makes contact tracing even harder.

"Should we have had more testing supplies available? You know, I would've thought so," said Dunn.

If you are interested in getting tested, you can learn more on the Arizona Department of Health Services website.