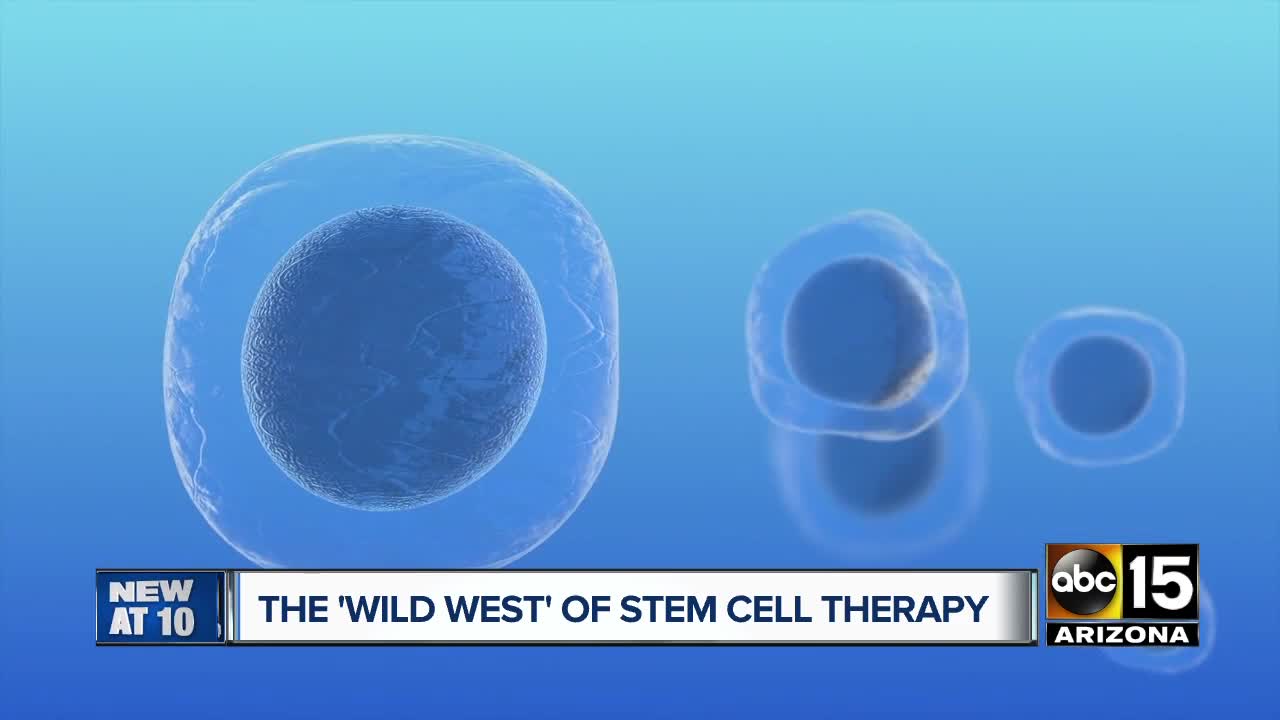 The Valley is one of the most popular places in the country for stem cell clinics. The new and controversial therapy is being marketed and practiced all over Phoenix and Scottsdale. 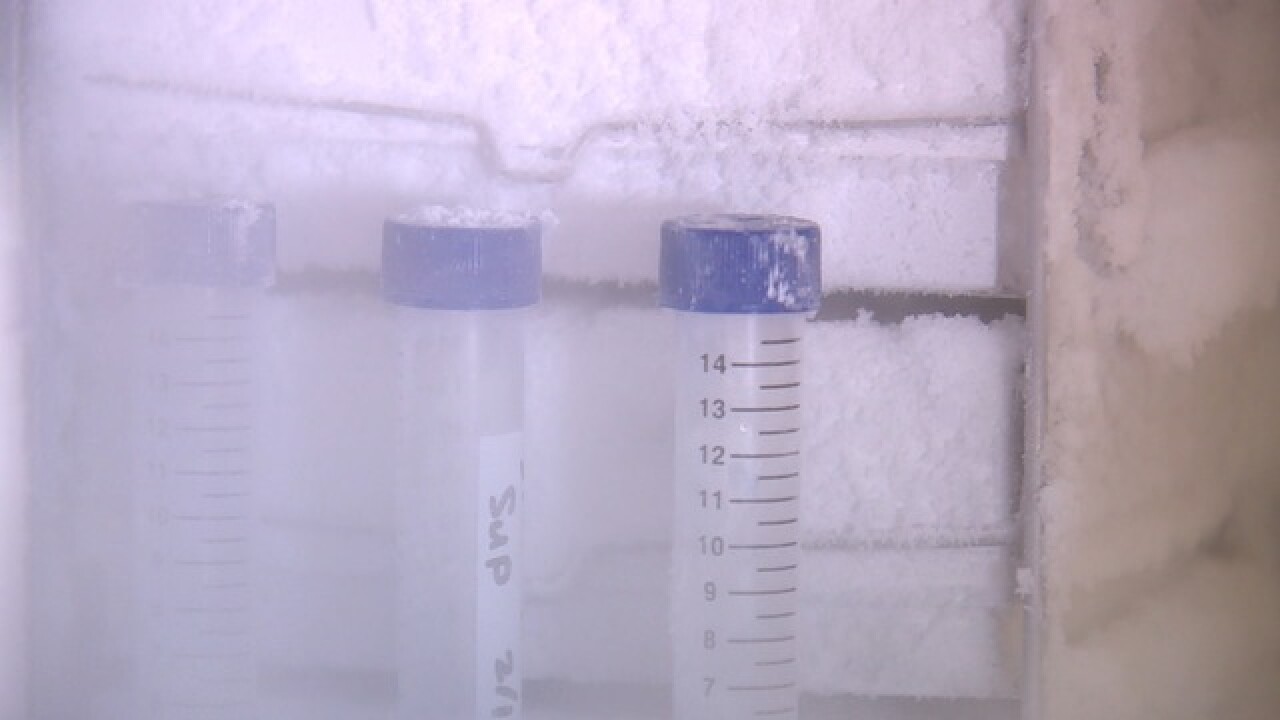 Arizona has been called "the wild, wild west" of regenerative medicine.

The Valley is one of the most popular places in the country for stem cell clinics. The new and controversial therapy is being marketed and practiced all over Phoenix and Scottsdale.

The less invasive procedure promises to heal pain, nearly anywhere in their body. It is advertised as effective, safe, and ethical, but outside experts and industry insiders say consumers need to do their research to avoid being exploited, and potentially spending thousands in cash on a worthless injection.

"IT HAS GREAT POTENTIAL"

The world of regenerative medicine is still being explored and developed.

"There's a lot of hope and promise, generally around the prospects for stem cells," said ASU Professor Emma Frow.

"We’re still in the developmental stage. Stem cell therapy has been around for less than ten years. That’s new in medicine," said Dr. Steven Sorr, a naturopathic physician who runs Source of Health in Scottsdale.

"It encourages your own body to heal itself," said Janet McConnell, a 63-year-old bodybuilder who "had cartilage damage several years ago."

Instead of a surgery that would have derailed her competition training for months, she opted for injections.

"Three years ago, instead of the surgery, I had a PRP treatment," said McConnell. "It was very effective."

Years later, she returned to Dr. Hernandez for another round.

For most, Stem Cell and Platelet Rich Plasma (PRP) therapy is a mystery. "It's kind of controversial and experimental," said Matthew Riddle, Director of Sales for Celling Biosciences.

The treatments concentrate platelets or stem cells, usually from the patient's own blood. Experts say it is important to always ask the doctor or provider where the "growth factors" are coming from, because in order to ensure they are alive they should be coming from the patient's own blood, fat, or bone marrow. Otherwise, patients can receive "dead" stem cells, which are not nearly as effective.

"We are very adamant to use the patient's own cells," said Riddle, who uses a centrifuge to separate out the blood, saline and growth factors that will be re-injected. "When we inject that into an area, we are telling your body to go heal that spot," said Dr. Hernandez.

"Stem cell treatment is really about trying to take the stem cells out of your body and...inject them back into another part of your body, in order to try and heal whatever part of the body is suffering," said Professor Frow.

According to researchers, Scottsdale and Phoenix are two of the seven "hot spot" cities in the country.

Arizona State University professors Emma Frow and Dave Brafman spent years studying the industry, and mapping out dozens of clinics in the Valley. They believe there are many more, as some intentionally practice under the radar. "I don't believe right now that there is enough evidence to suggest that they work," said Professor Frow.

"They are unregulated, unproven and for-profit," added Professor Brafman.

The profits are plentiful. "There's cash involved, so this isn't covered by insurance," said Dr. Hernandez.

The thousands in cash is one of many reasons the burgeoning industry is ripe for exploitation.

"The other piece too, it is it is new and upcoming," said Dr. Hernandez.

Many potential patients do not know the first thing about the procedure they are being sold, and doctors say many fall for sales tactics that are practiced at traveling seminars.

"They are preying on people's pain," said Dr. Sorr. "I think it’s really unethical and it upsets me."

Dr. Sorr believes the seminars are "a scam" that specifically targets an elderly clientele.

"They wine you and dine you. They go through a little dinner presentation and it is not the doctor, it's a marketing agency," he said.

The doctor told ABC15 he has had clients who have been duped, even after he told them they were not ideal candidates for stem cell or PRP therapy.

"It really broke my heart that he spent thousands upon thousands of dollars for something that was worthless.

"I don't agree with how they are done," said Dr. Hernandez. "They inject people and they get money. That's not practicing medicine, that is selling."

Both naturopathic physicians told ABC15 that some patients do not need the treatment, or will get subpar results from the injections. They say it is well known in the industry that some practices will continue to sell in order to reap the thousands in cash.

"ALL OF IT FALLS ON THE PATIENT"

Right now, there is little regulation or oversight of the industry in Arizona.

"Really all of it the falls on the patient, with very little recourse if things go wrong," said Dr. Emma Frow.

During the course of our investigation, ABC15 discovered the Arizona Medical Board and County Health Department do not take complaints or oversee the people performing injections. The federal government has also been slow to implement widespread regulation.

"The FDA has their hands tied," said Dr. Sorr. "There are too many people out there that are doing this that haven’t had the proper training, they don’t have the right experience, the right tools and all that."

There are some larger regulations in Arizona, governing who can handle a needle and perform injections.

Unlike other industries though, including massage therapy, there is no board that checks on licensing or investigates complaints involving botched procedures or alleged fraud.

"The state medical boards, need to become a little bit more involved in sort of identifying, or responding to claims," said Professor Brafman.

"I don't think it would hurt to have it, for sure. At the end of the day it's about protecting the public," said Dr. Hernandez.

For thousands of Arizonans, like Janet McConnell, regenerative medicine has helped heal chronic pain. Before spending thousands thousands though, do your research. "Always get a second opinion," said Dr. Sorr.

"I think this is really a case of buyer beware, or consumer beware," said Professor Frow.

If you are planning on undergoing a stem cell or PRP treatment, click here for questions experts say you should always ask ahead of time.