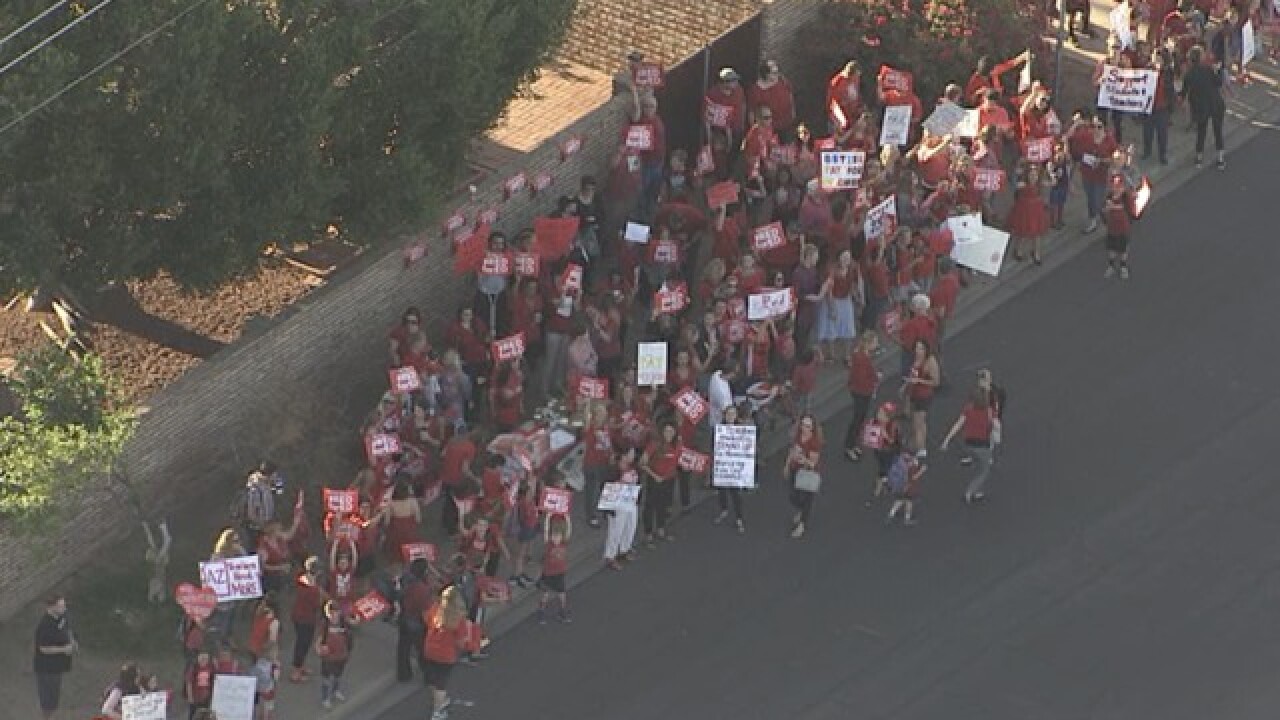 Thousands of Arizona teachers gathered outside their schools Wednesday wearing red shirts, chanting and carrying protest signs to show solidarity in their demand for higher salaries and better overall school funding from the state.

They gathered before classes started for "walk-ins" that were planned at approximately 1,000 schools statewide as part of a grassroots movement pushing for a 20 percent raise and more than $1 billion in new education funding. Arizona's demonstration is part of a wave of educators demanding higher pay that started in West Virginia where teachers successfully won a 5 percent raise after a statewide strike.

Oklahoma teachers have walked out in protest over educating funding, and Kentucky educators called in sick to protest pension reform. Arizona teachers are considering a strike.

The Arizona protests came a day after Republican Gov. Doug Ducey defended his school funding plan and called talk of a teacher strike a partisan ploy. Ducey, who is for re-election, has been touting increases to education funding during his three years in office and his promise of a 1-percent teacher raise and $100 million in funding for districts this year as a start to restoring nearly $400 million in cuts.

The grassroots group Arizona Educators United has mobilized teachers and supporters across the state through their (hash)RedforEd campaign. In addition to a 20 percent pay bump, they're seeking increased pay for support professionals, a permanent raise structure, and a freeze on corporate tax cuts until per-pupil spending reaches the national average.

Stephanie Perry, a 36-year-old single mother of two and a special education teacher at Tuscano Elementary School in Phoenix, said she makes $36,000 annually and lives with her parents.

"I'm not the only one here struggling at this school," she told fellow teachers during the protest outside the school.

At a high school in the Phoenix suburb of Glendale, science teacher Lindsay Walls was among about 50 teachers who started their day early to demonstrate. She said her district pays well, but it has come at the cost of school facilities and support staff pay, and she isn't buying Ducey's argument that he has significantly boosted school funding.

"I buy that he's not understanding how tragic it is," Walls said. "If he's under the impression that there is funding coming to our schools, than he should come visit us at Apollo High School, he should come to one of our football games and go ahead and join us in the bathroom sometime and see what our facilities look like."

Organizers from Arizona Educators United said earlier this week that they had an estimated 1,000 schools planning to participate in the walk-ins, including Phoenix and its suburbs, Tucson and Yuma, in the state's southwest corner.

At Tuscano Elementary School in southwest Phoenix, around 50 educators and their supporters began gathering around 7 a.m. Some drove in with messages of support scrawled on their cars back windshield, while others toted signs.

Kailey Berry, a third-grade teacher at Tuscano, is in her first year of teaching in Arizona after moving from the Midwest. She said she sees a direct link between teachers taking new jobs elsewhere and the low average pay.

"If we don't start raising our bar a little bit and narrowing that gap between other states, we might not be able to keep teachers like me who are from out of state," Berry said.

After about 10 minutes of speeches in English and Spanish, the teachers linked arms and marched into the school chanting "Red for Ed."

When students started arriving by 7:30 a.m., some teachers headed back outside to direct traffic or monitor the playground. Some students purchased flavored water for $1 at a pushcart near the building entrance. A sign said the proceeds go toward school supplies.

So far, Ducey and the Republican-controlled legislature haven't budged to the group's demands. Ducey has stuck by his proposal for a 1 percent increase this year, while pledging that other fund hikes will come down the road.

A lack of legislative action could trigger a massive job action. On Monday, Arizona Educators United told their 35,000 Facebook members to prepare for a possible walk-out this week that would close schools.

Arizona teachers are among the lowest paid in the nation. According to the federal Bureau of Labor Statistics, Arizona elementary teachers earned a median wage of $43,280 in 2017 and high school teachers $46,470, the 3rd and 6th lowest in the nation, respectively. Adjusted for local cost of living, federal figures show elementary teachers actually rank 49th in earnings and high school teachers 48th.