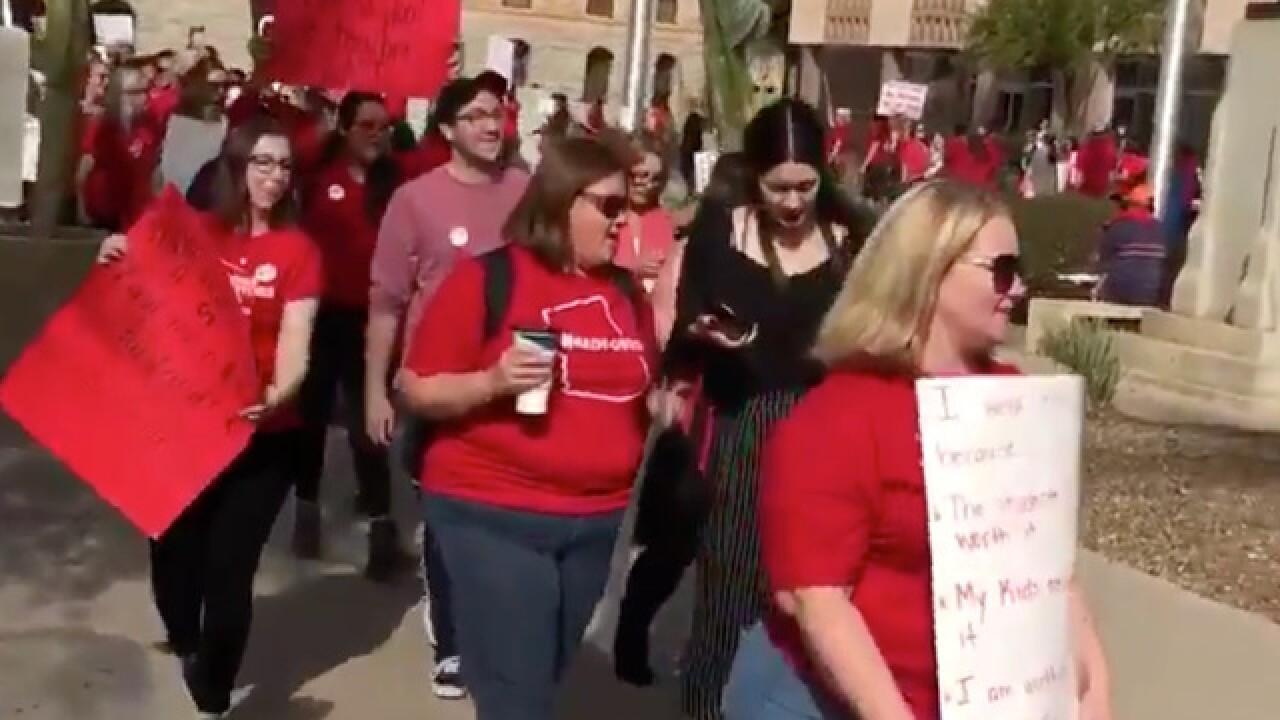 Arizona teachers on Tuesday began weighing whether to walk out of their classrooms to demand more school funding after weeks of growing protests -- a vote that's raising questions about how an unprecedented strike could play out across the state's education system.

The walkout vote comes after Republican Gov. Doug Ducey offered teachers a 20 percent raise by 2020. Teachers in a grass-roots group that's mobilized tens of thousands of teachers say the plan doesn't address other needs, including raises for support staff and a return to pre-Great Recession school funding levels.

Arizona teachers are among the lowest paid in the nation, and their actions came as educators in many Republican-dominant states have demanded higher pay. The movement started in West Virginia, where a strike garnered a raise, and spread to Oklahoma, Kentucky and most recently Colorado.

The potential for Arizona educators to walk out en masse is causing some confusion about how school districts would respond and what the repercussions could be in this right-to-work state, where unions do not collectively bargain with school districts and representation is not mandatory.

The Arizona Education Association, the largest teacher membership group, has supported the so-called (hash)RedforEd movement, which grew out of a grass-roots effort on social media that turned into the Arizona Educators United group.

The association said it has informed its 20,000 members of the risks of a walkout because of a 1971 Arizona attorney general opinion. It said no law bans a teacher strike but that a statewide strike would be illegal under common law and participants could lose their teaching credentials.

"We've been telling our members that for six weeks, and they understand it," association President Joe Thomas said. "And it doesn't seem to faze them. That shows how upset they are. They're willing to take this risk for their students."

He would not reveal how many votes need to be cast in favor of a walkout. If it happens, it's largely up to school districts how to handle it.

Craig Pletneik, spokesman for Phoenix Union High School District, said there are "pages of questions" on the logistics -- such as the threshold for closing schools, who gets paid and how food service could be handled.

"All the districts are trying to sort this out," he said. "Hopefully there'll be enough time for us to communicate properly to our schools and our parents."

At Mesa Public Schools, the state's largest district, leaders told staff members that if a walkout is called, schools will close and extracurricular activities would be suspended.

Short-term contract support personnel and hourly employees, such as custodial workers and bus drivers, would not work and would not be paid, while certified employees would keep receiving paychecks, district guidance said.

Students wouldn't be able to access buildings on campuses, and any school days missed would be made up at year's end, Superintendent Michael Cowan wrote to teachers.

Most voting was expected to take place Wednesday, the day of the week educators have been meeting for pre-work rallies and walk-ins.

The past six weeks of rallying triggered stories about teachers living with their parents, working multiple jobs and teaching in facilities with poor infrastructure and out-of-date materials.

In response, Ducey touted his plan for raises that would cost about $650 million a year. The governor, who is up for re-election this year, said rosy economic projections, lower social service needs, "efficiencies" in other departments and the elimination of other planned budget proposals would cover the cost.

Some lawmakers, who must approve Ducey's proposal, have expressed concerns about finding the money for it. But some education groups have said it's a step in the right direction.

Arizona Rural Schools Association executive director Wes Brownfield said he understands why teachers may want to walk out, although he's waiting to see how lawmakers may tinker with Ducey's plan.

"If somebody throws you a life vest, you're taking the vest," he said.

But Brownfield also said he understands why teachers may want to walk out, a move that he hasn't seen statewide after decades of working in Arizona schools.

Thomas, head of the Arizona Education Association, said similar demonstrations have happened at the district level but nothing quite like this.