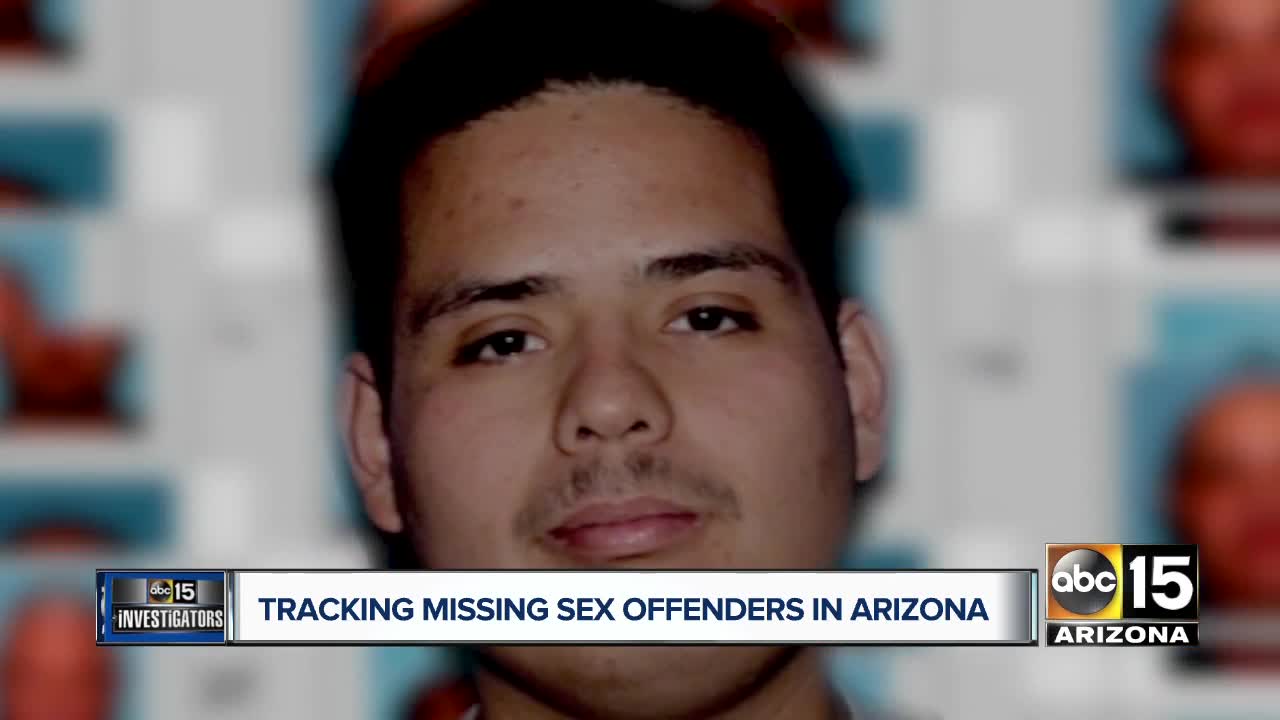 Sex offenders who fail to check-in are considered missing in the state of Arizona.

ABC15 has been tracking the numbers and learned that one out of eight sex offenders in the state registry has an unknown address, cross street listed as an address, or is simply listed as missing or "absconded."

It's a disturbing thought, especially for victims who have been targeted by a sex offender and are trying to keep track of their whereabouts.

While investigating the story, ABC15 learned that most victims of a sex offender listed as "absconded" have no idea their attacker has gone missing, even though some said they had signed up to opt-in for notifications through the adult probation department or the sex offender registry.

A woman who requested anonymity is one of them. Her daughter was sexually abused by convicted sex offender Andrew Reyes when she was 11 years old.

Silent Witness even put out a flyer with Reyes's mugshot on it last month, listing him as a "wanted" sex offender for a violation of his probation.

Court documents ABC15 obtained show Reyes did not report to a routine law enforcement check-in appointment on October 3, 2019, and attempts to locate him failed.

The woman whose child had been victimized by Reyes appeared shocked and broke down after learning Reyes was now listed as an "absconder."

ABC15 reached out to Maricopa County Adult Probation who said victims have to opt-in to be notified, and that this woman had not opted-in, even though she insisted she had.

"Our whole family is going to be uneasy right now. It's messed up man. I think the families should be notified face to face, I think before they hear it from somebody else," said the woman.

While many sex offenders could just be homeless or moving from shelter to shelter, the majority of them still check-in with required agencies.

Vanessa-Giselle Holliman, a sexual assault survivor turned behavioral health specialist said it's the ones who don't check-in that we should worry about most.

Those are the offenders who were not following the rules, not showing up for required mental health counseling programs, and could be most at risk for re-offending again. "They are the ones that are predatory," said Holliman.

She understands the fear and anxiety victims feel, even years after a rape or attempted assault as she too has been there at one point, and she counsels many victims who still live in fear of their attacker and feel fear and anxiety when they did not know where the person who attacked them is after being released from prison.

"Essentially the only time a victim is notified is when they first get out of jail or prison," said Holliman.

Holliman herself was sexually assaulted by a family friend when she was just eight years old. "I still remember that first day like it happened yesterday," she said and added she is advocating for stronger sex offender notification laws in Arizona. "I think it should change. I think all level three sex offenders should be on lifetime probation so that there is a probation officer responsible for knowing their whereabouts," said Holliman.

ABC15 also spoke with Mesa police. The department has a very active sex offender notification unit. Officers in the unit work around the clock to track down every sex offender who has moved into their city limits.

"We are physically going out to the address where they say they live and we're verifying they're physically in that place," said Sgt. Jason Troth with the Mesa Police Department.

Of about 900 sex offenders in Mesa, Troth said 21 of them were listed as "absconders."

In Phoenix, the numbers are much higher, but that's expected because it's a bigger city with a larger population. Phoenix police said they too have a tracking unit, but if a sex offender goes missing, there is no one who is actively out hunting for that person because they do not have the manpower for that. A spokesman said they do issue warrants for their arrest though.

"It's our hope that officers from wherever they are run into them and then they can be held accountable," said Sgt. Troth from Mesa, adding that they too do not have the manpower to go hunt and track down every missing offender in the city, if initial leads do not pan out.

According to numbers pulled from the state's sex offender registry:

RELATED: Are there sex offenders in your neighborhood? Check Valley map

A spokeswoman with Maricopa county adult probation says: "There are multiple points in the court process in which victims can opt-in for notification. The office that prosecutes the case is the point of contact for victims to opt-in for post-conviction notification."