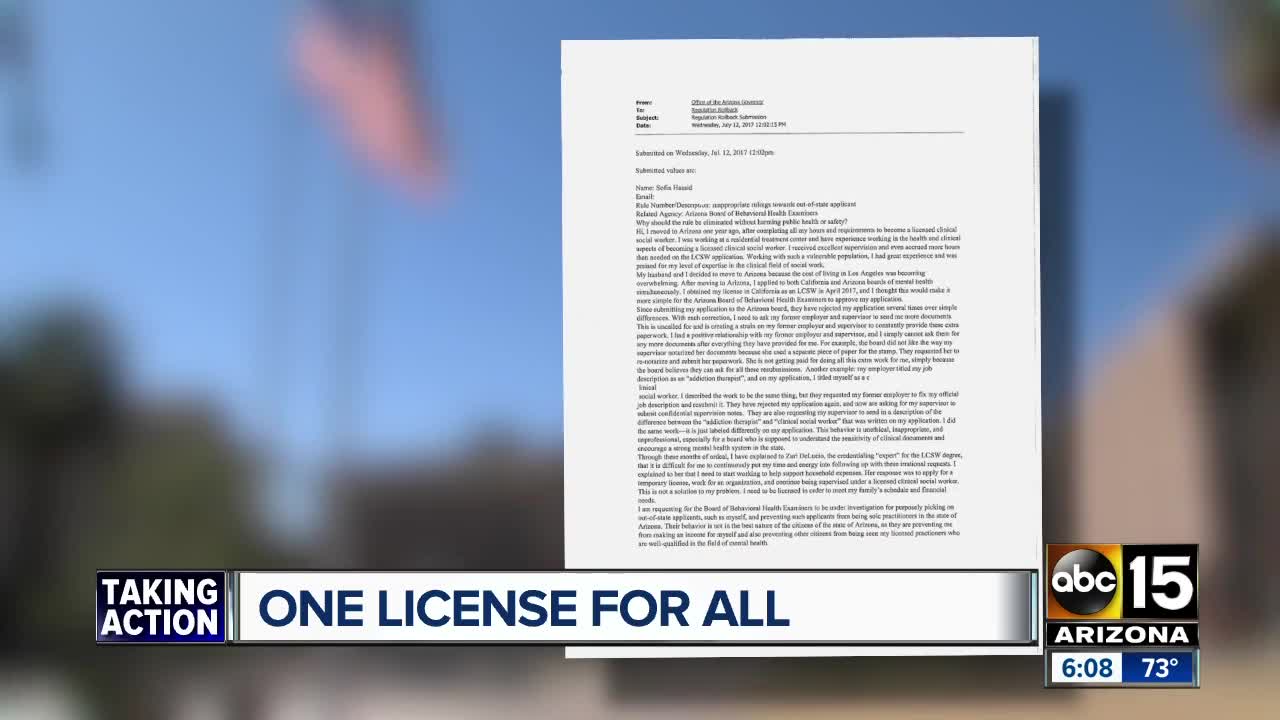 Arizona will allow anyone who needs a license to do their job to work in the state if they're already licensed elsewhere.

PHOENIX — Arizona Gov. Doug Ducey signed legislation Wednesday making the state the first in the nation to automatically grant occupational licenses to anyone who moves there with an unblemished credential from another state.

The action removes a barrier for doctors, manicurists, home inspectors and just about anyone else who needs a license to do their job.

"You don't lose your skills simply because you pack up a U-Haul truck and make the decision to move to Arizona," Ducey, a Republican, said after arriving to a news conference in a U-Haul truck.

Critics say licenses ensure that professionals are trained in how to do their jobs safely and worry that newcomers may arrive from states with easier licensing requirements in some fields.

"We have shortages in teaching, medicine and nursing, we know that," Democratic Rep. Pamela Powers Hannley said when the House debated the bill, which she opposed. "But we don't have shortages across the board. So why should we dumb down our standards when it's really not necessary to build up the workforce?"

Licensing generally comes with an education requirement, paperwork and fees. Differences in requirements from one state to the next can make it expensive and time consuming to work when a licensed professional moves to another state. Critics say licensing decisions are often made by boards of people already licensed in the trade, who have an incentive to make it cumbersome for new competition to enter their field.

A 2015 report by President Barack Obama's administration found that licensed professions have fewer workers and higher wages, along with higher prices for goods and services that don't always bring higher quality.

"The way it's controlled is not for public health and safety most of the time," said Paul Avelar, an attorney with the Institute for Justice, a libertarian legal group that has fought to reduce occupational licensing requirements. "Most of the time it's for protectionist reasons."

The share of workers requiring a license to do their job has exploded from about one in 20 to one in four over the past 60 years, according to a study of the issue by the National Conference of State Legislatures, the National Governors Association and the Council of State Governments. The groups are in the midst of a three-year project to make it easier for people to take their skills across state lines.

Arizona will automatically grant a professional license to someone who becomes an Arizona resident and had a similar license for at least a year in another state without disciplinary action. Arizona's licensing boards can test only for information specific to Arizona law. It applies almost universally to the long list of licensed professions in industries including health care, dentistry, construction, real estate, hair care and funeral embalming. The only exceptions are lawyers, security guards and private investigators.

Many states have tried to reduce licensing burdens by entering compacts promising to recognize licenses from one another.

Utah enacted similar legislation last year but it applies only to military spouses, said Iris Hentze, a policy associate who works on the licensing project at the National Conference on State Legislatures. Many states, including Arizona, have tried various ways to make it easier for husbands and wives to get to work when members of the military move for a new assignment, including waiving fees and expediting the process, she said.

Arizona's legislation creates a new frontier because it doesn't require any other state to confer the same benefits on people licensed in Arizona.

"Hopefully all those workers from across this country are looking at Arizona and saying, `Hey, I'm going to move to Arizona,"' Rep. Warren Petersen, a Republican from the Phoenix area who sponsored the legislation, said when the House approved the bill earlier this year. "We welcome you to Arizona. We know you're qualified. We know you're skilled."

Ducey has aggressively picked fights with licensing boards, which he called "bullies" who look out for their "cronies" during his state of the state speech in January. But his efforts to reduce regulations have sometimes turned out to be problematic.

He courted Uber's self-driving car testing and enthusiastically supported legislation sought by Theranos to let people get blood tests at Walgreens stores in Arizona. Uber abruptly left the state when one of its autonomous vehicle hit and killed a woman, and Theranos was accused by federal regulators of duping investors about the accuracy of its blood tests.

Ducey rejected any comparison to the bill he signed Wednesday, saying the legislation "takes into account public health and public safety."