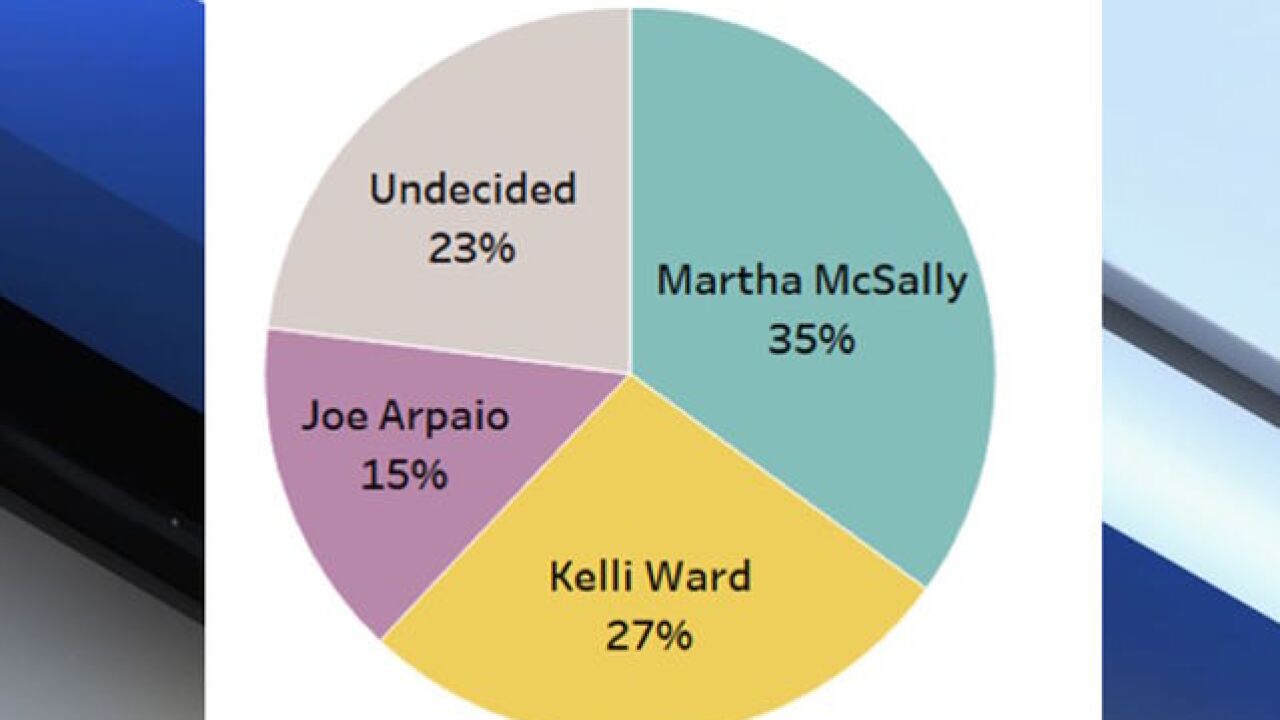 Copyright 2018 Scripps Media, Inc. All rights reserved. This material may not be published, broadcast, rewritten, or redistributed.
OHPI/ABC15 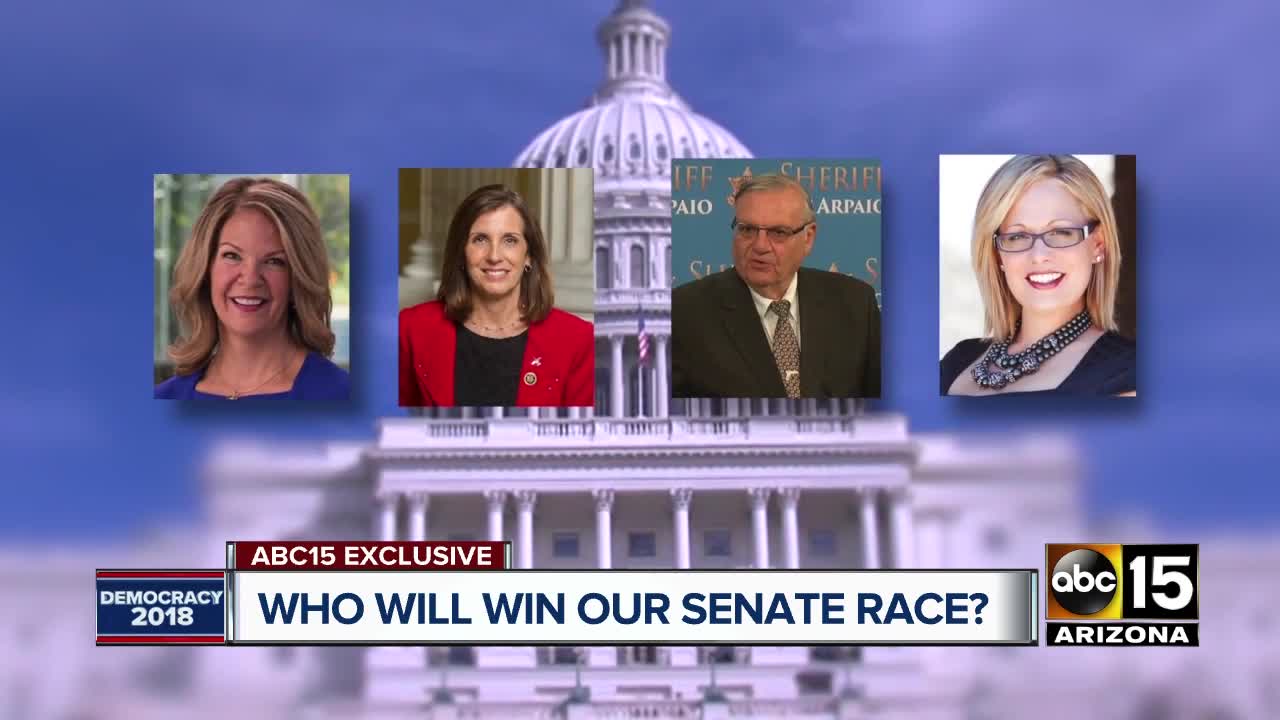 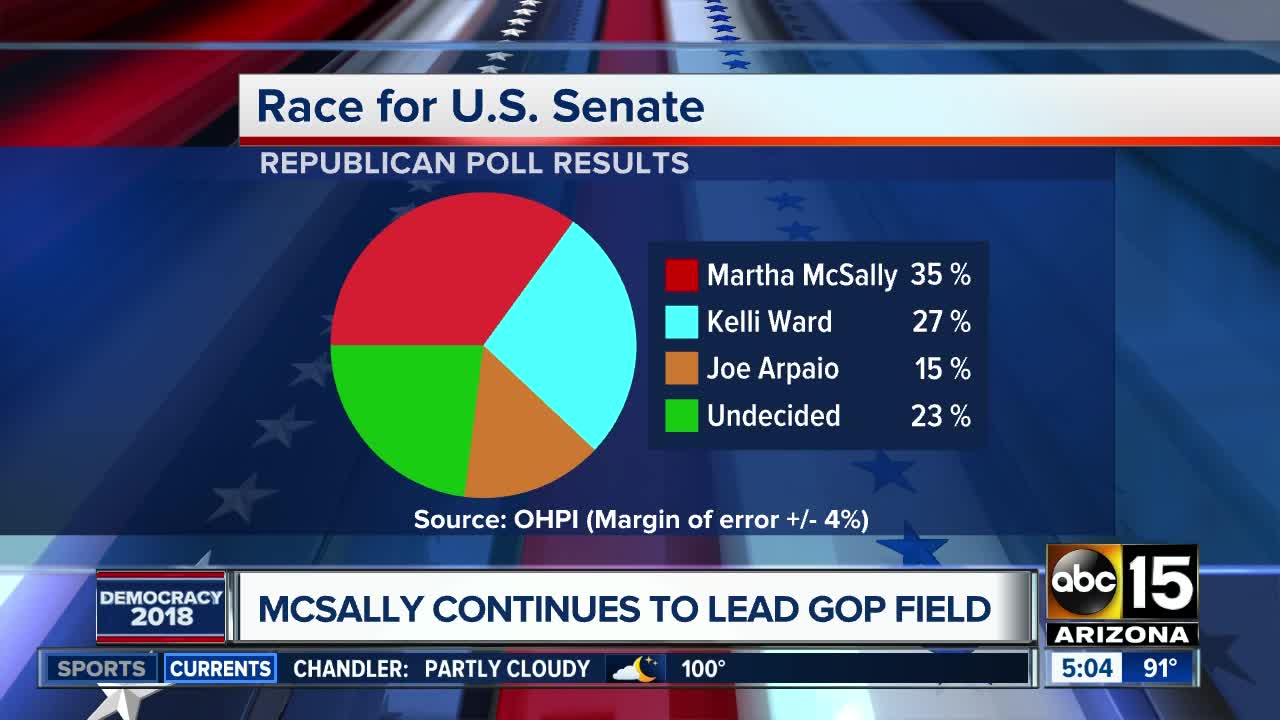 With less than a month to go before Arizona's Primary Election Day, an exclusive OHPI/ABC15 poll shows the race tightening for U.S. Senate in both primary and general elections.

Arizona is considered a key state in determining the power balance in the U.S. Senate next year. Candidates are vying for an open seat due to the retirement of Republican Sen. Jeff Flake. OH Predictive Insights surveyed 576 likely voters in the GOP primary from July 23 to July 25. Of those surveyed, 35 percent said they would vote for Rep. Martha McSally, 27 percent favored Kelli Ward, and 15 percent liked Joe Arpaio. A whopping 23 percent of likely voters surveyed said they were still undecided on a candidate for the August 28 Primary. OHPI Pollster Mike Noble has been tracking the race and said Ward is closing in on McSally.

"McSally was up 14 points, now she's only up eight," Noble said. "With almost a quarter of the voters undecided, with early voting starting this week, I think the primary is far from over."

Ward found her strongest support in rural Arizona, according to the poll. McSally had the biggest share of voters in Pima and Maricopa counties. Most of the undecided voters were in Maricopa County.

Noble thinks Arpaio's chances are fading, saying "[t]here's a better chance of catching a photo of him in pink underwear and eating green baloney than seeing him as the next Arizona Senator."

“This is a two-way race between a steadfast conservative in Dr. Kelli Ward and a Jeff Flake impersonator in Martha McSally," said Zachery Henry, press secretary for the Ward campaign. "Arizonans will not be duped again – this time they will support the candidate who will build the wall: Dr. Kelli Ward.”

ABC15 also reached out to the McSally and Arpaio campaigns for comment on the poll but did not get a response Tuesday night.

OHPI/ABC15 also polled 600 likely voters about head-to-head general election match-ups with likely Democratic nominee Rep. Kyrsten Sinema. Sinema lead in all the scenarios. McSally was the closest competitor, trailing Sinema 44 to 48 percent. "It's really hard to escape the shadow of Trump in the race, so the big key in the general election will be McSally pivoting from hugging Trump to, of course, getting those folks who are not favorable of Trump," Noble said.

For information on voting in the August 28 Arizona Primary Election, including how to early vote by mail or in person, contact your county recorder's office.

Independent or non-party affiliated voters can participate in Arizona's primary elections. They can choose a ballot from any party, but they will not automatically receive an early ballot in the mail even if they are on the Permanent Early Voter List. Maricopa County Independent voters can request a mail-in ballot here.