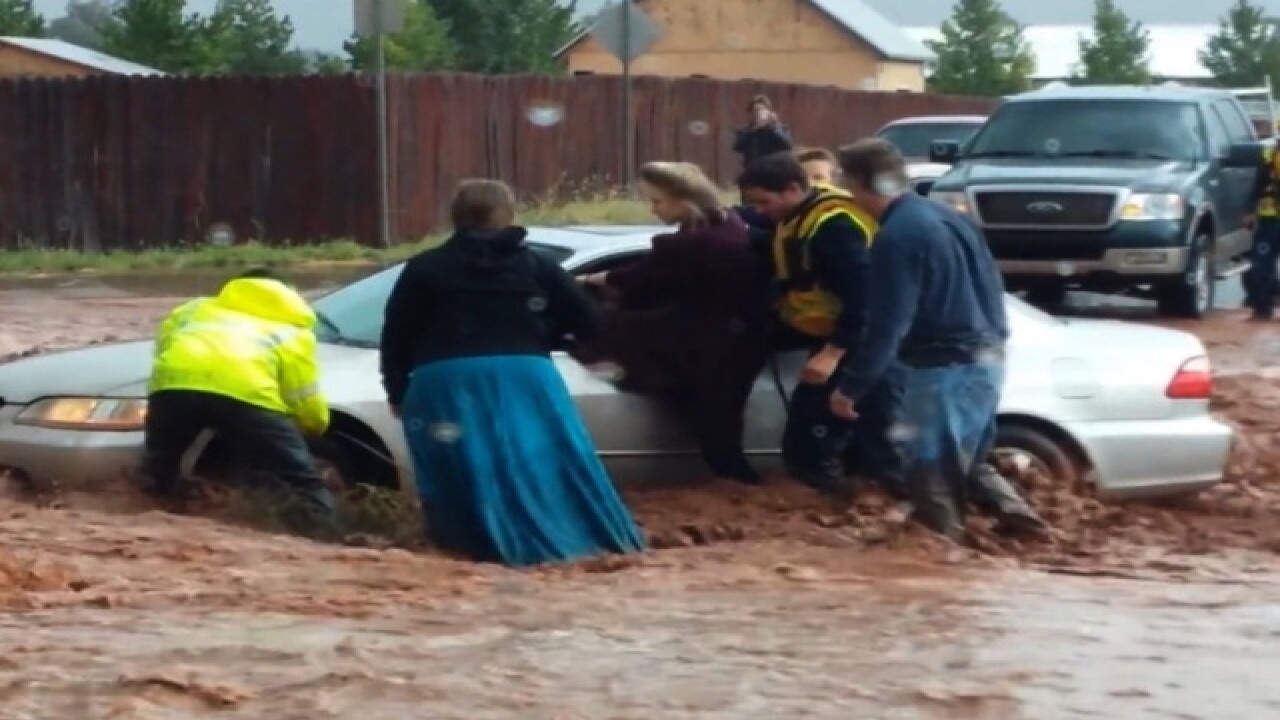 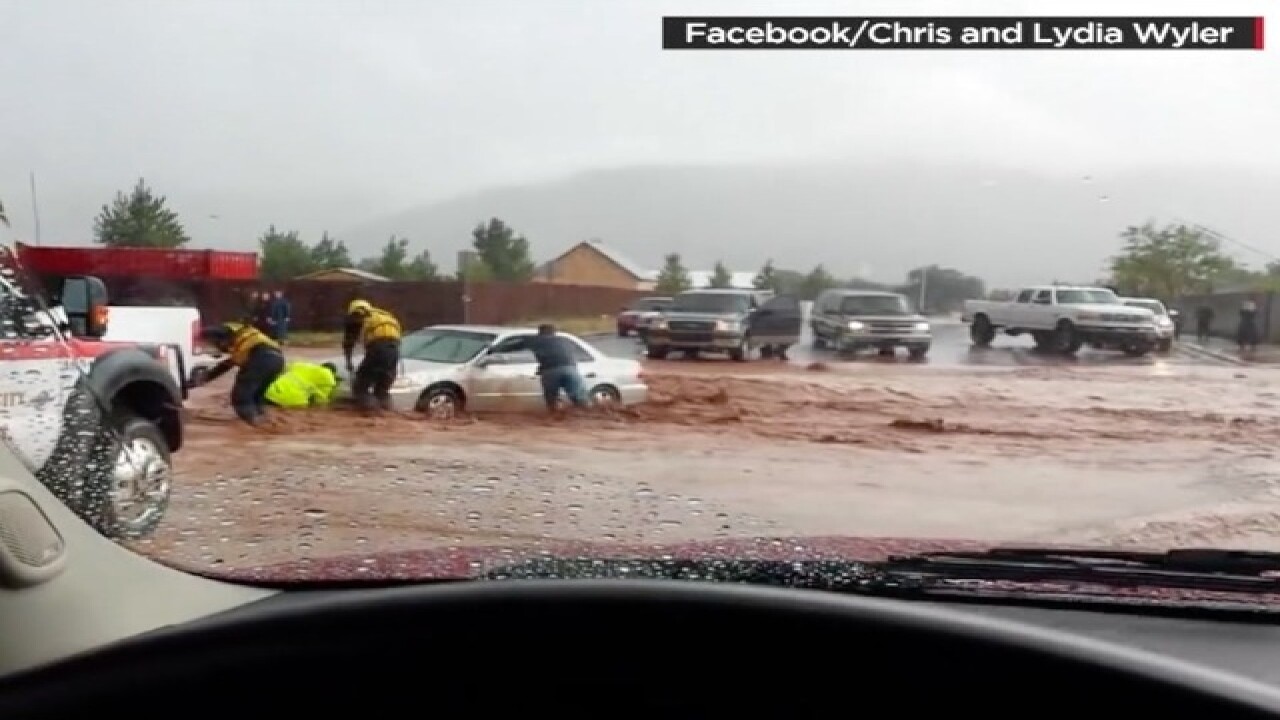 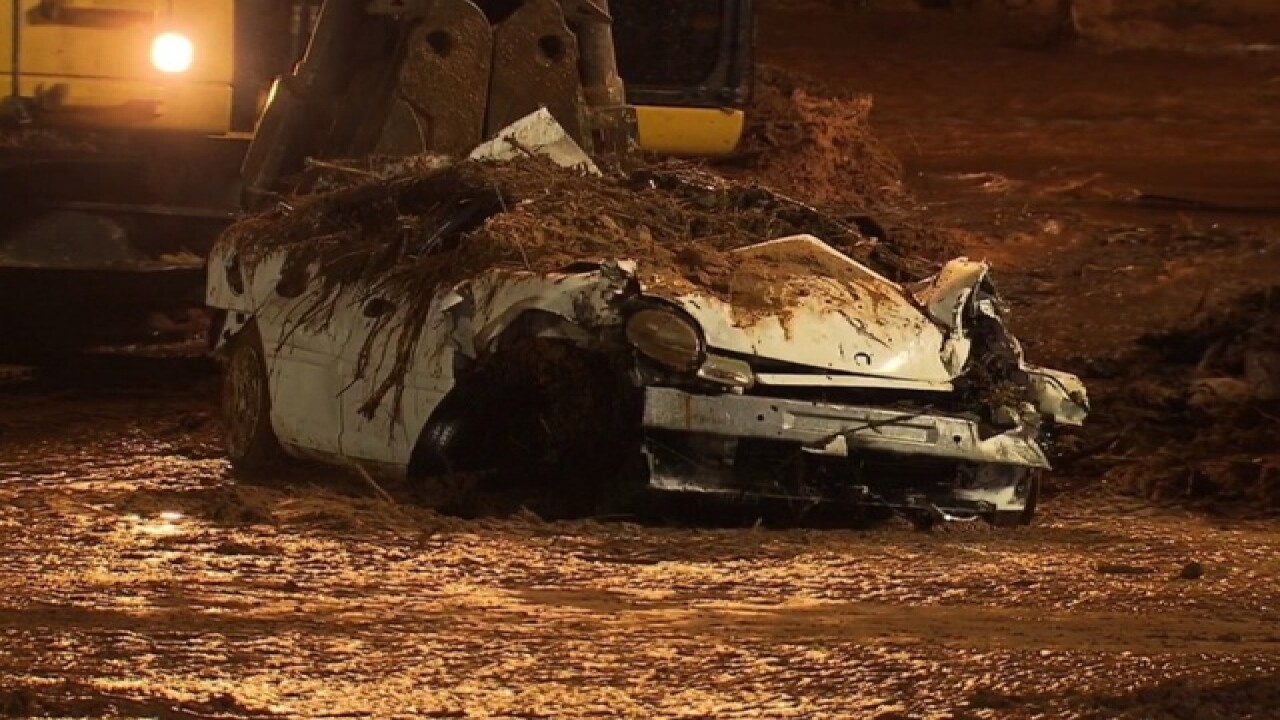 Search-and-rescue teams trudged through muddy streambeds Tuesday in a small polygamous town on the Utah-Arizona border, looking for people who were missing after a devastating flash flood that killed at least 12 people.

With more rain in the forecast, men in helmets were perched at high points along the route, watching carefully for any more floodwaters that could suspend the search in Hildale, the secluded community that is the home base of Warren Jeffs' polygamist sect.

Only one person was still missing Tuesday afternoon out of 16 people -- three women and 13 children -- who were in two vehicles that got smashed Monday by a wall of water and carried several hundred yards downstream. Authorities had not identified the dead. Three people survived, all of them children.

On Tuesday, the streets were caked in red mud, and earth movers cleared the roads and piled up mounds of dirt. As a helicopter buzzed overhead, crowds of boys in jeans and girls and women in deep-colored prairie dresses watched the rescue effort.

Residents called it the worst flood in memory for the sister towns of Hildale, Utah, and Colorado City, Arizona, which are 315 miles south of Salt Lake City at the foot of picturesque red rock cliffs. It was in this area at Maxwell Canyon where heavy rains sent water down Short Creek and barreling through the towns.

The torrent was so fast, "it was taking concrete pillars and just throwing them down, just moving them like plastic," said Lorin Holm, who called the storm the  heaviest in the 58 years he's lived in the community.

The women and children were in an SUV and a van on a gravel road north of the towns. They were returning from a park when they stopped at a flooded crossing and got out to watch the raging waters, Hildale Mayor Philip Barlow said.

What they did not know was that a flash flood was brewing in the canyon above, he said. It came rushing down and engulfed their vehicles.

"We're greatly humbled by this, but we realize that this is an act of God, and this is something we can't control," said Barlow, a Jeffs follower. "We have to take what we receive and do the best we can."

About three hours earlier, the National Weather Service had issued a flood warning for the area, saying: "Move to higher ground now. Act quickly to protect your life." It's unknown if the victims were aware of the warning.

The raging torrents are not uncommon in an area prone to flash floods, but the volume and pace of Monday's rain was a "100-year event," said Brian McInerney, hydrologist with the National Weather Service in Salt Lake City.

The height of the storm lasted about 30 minutes, pouring 1 1/2 inches of rain into a desert-like landscape with little vegetation and many steep slopes.

Monday's weather event was like a bucket of water being poured onto a rock -- it slid right off and began running downstream, picking up sediment to create the forceful, muddy "chocolate mess" that rushed through the city, McInerney said. Another half-inch of rain came within the hour.

Officials say the bodies of two people were recovered in Arizona, one about 5 miles downstream. The bodies of six others were found in Utah.

Utah Gov. Gary Herbert said Tuesday that state officials were offering resources to help with the search-and-rescue effort. Herbert is away on a trade mission in China, but he sent Lt. Gov. Spencer Cox to the town.

Cox called it one of the worst-weather related tragedies in state history and said the Utah National Guard will send troops.

Chris and Lydia Wyler of Hildale said heavy rainfall usually draws spectators who love to splash in it and watch as it surges through creeks.

"People go out on the streets and kids will start playing," Chris Wyler said. "But this storm that hit yesterday, it was just so severe and so sudden."

Wyler's SUV was hemmed in by the floodwaters. She filmed women in braids and long skirts being pulled from a car in the path of a torrent of water.

"It looks like a tsunami went through," said Ross Chatwin, who lives in Colorado City. He and about 500 people joined in the search Monday night.

Wilford "Woody" Williams says the fierce downpour turned the streets in town into rivers. He joined the search effort overnight, holding a flashlight and watching for anything that looked like human remains as crews carefully skimmed off layers of debris. They spotted a nightgown and what appeared to be the fabric lining from the roofs of one of the vans, but no remains.

The search effort temporarily eased the tension between Jeffs followers and others who no longer belong to the sect but still live there. That split between loyalists who still believe Jeffs is a victim of religious persecution and defectors who are embracing government efforts to pull the town into modern society has sharpened in the four years since Jeffs was sentenced to life in prison for sexually assaulting underage girls he considered brides.

"We were all coming together for a common cause, without any bad feelings," he said.