Pumpkin-carving hacks: We test out three and get advice from a world-renowned artist/pumpkin carver 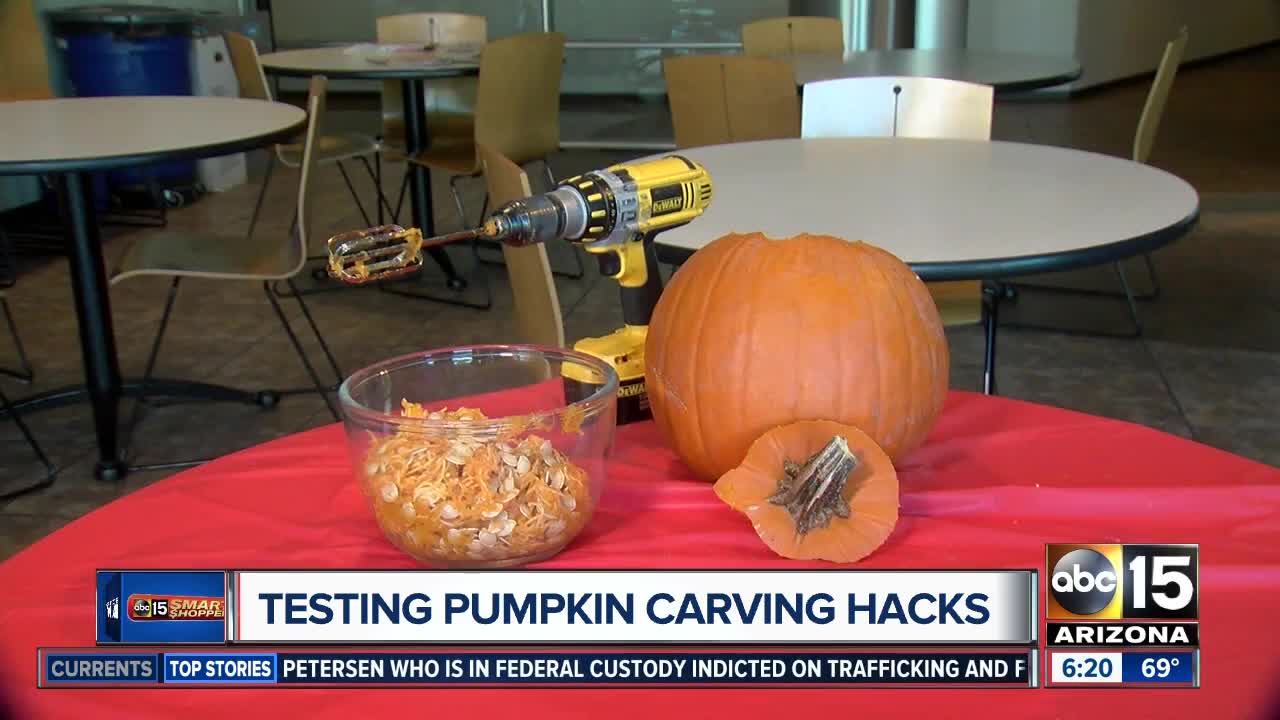 Can these tricks make carving your pumpkin easier? 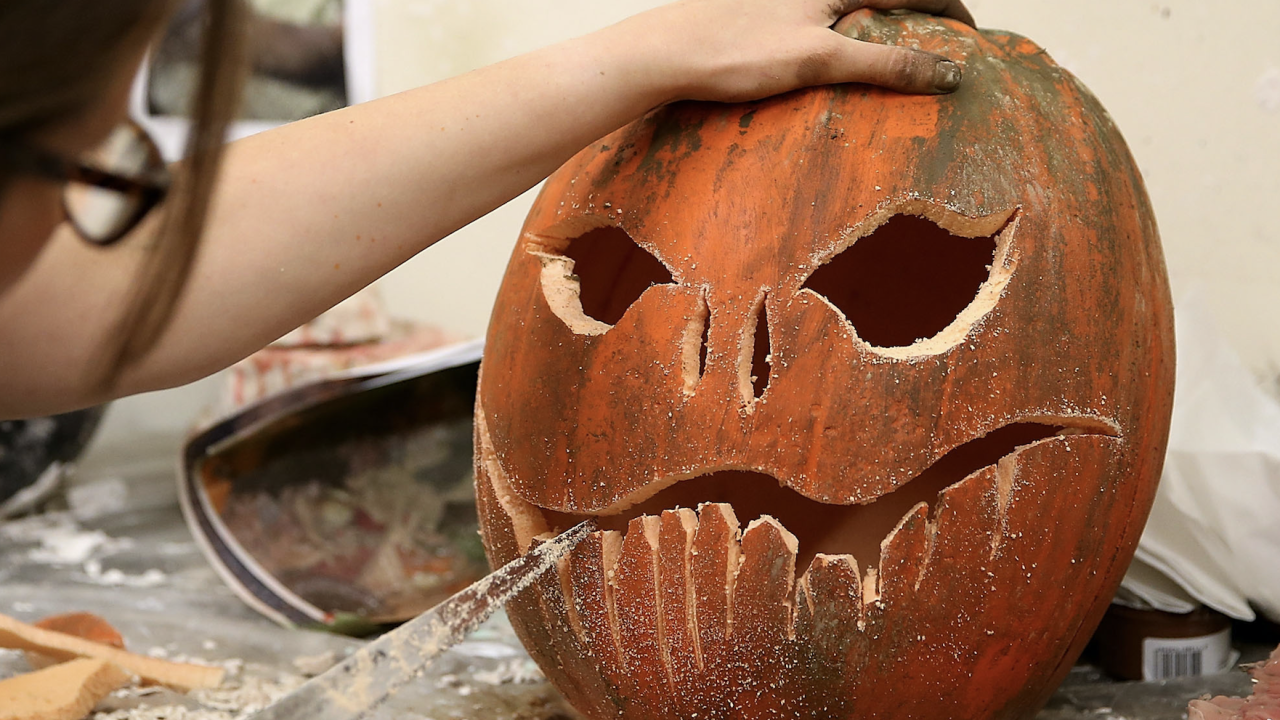 Halloween is just around the corner, and it's time to start getting pumpkins! Carving them can sometimes be difficult and messy. So, we're testing out some hacks that are supposed to make the process easier. Let's see if they're Bull or No Bull!

CLEAN OUT YOUR PUMPKIN WITH A HAND MIXER BEATER AND A DRILL:

We saw this first hack all over the internet, and we followed the step-by-step instructions from the website, A Wonderful Thought. It shows how to use a hand mixer beater and a drill to clean out your pumpkin in about two minutes!

We cut the top of our pumpkin around the stem. We didn't do this in a perfect circle. We cut a little triangle on one end to better line up the cutout of the pumpkin with the stem once it's time to put it back in place. Then, we took a big knife and chopped off the squishy pumpkin guts and seeds into a glass bowl that were attached. You could do so over a pan if you planned to cook the seeds or the pumpkin.

Then, I enlisted some help! We put safety first, rocking goggles or eye-and-face protectors for the potential of flinging debris. Getting pumpkin in your eye would make for a completely different take of pumpkin p-eye! Bad joke... I know.

After that was set, we attached the hand mixer beater to the end of the drill. I held the base of the pumpkin while our intern, Celia, used the drill like a hand mixer on the insides of the pumpkin as if it were a bowl. She worked her way from the top down.

After we finished drilling, I cut off the stringy pumpkin that stuck to the whisk, turned the pumpkin upside down, and patted the back of it with our hands. Most of the guts and seeds came out into our bowl. We did the process twice, and after two passes, our pumpkin looked amazing and clean inside!

Though it did fling pumpkin a bit like cookie dough, it was overall less messy and faster than the traditional route. Just know it will take two people to do. Or, you can make a stabilizer like they did on this site.

DRAW YOUR DESIGN ON THE PUMPKIN WITH DRY ERASE MARKER, AND WIPE IT AWAY WITH A DAMP CLOTH:

Some people like to draw their designs on pumpkins as a guide to know where to cut out the Jack-O-Lantern, other faces and scenes. Others may want to draw their designs on the pumpkins, and not cut anything out at all. But, what if you make a mistake and used a permanent marker? Well, we saw many tips online encouraging people to use a Dry Erase Marker to draw the outlines instead. That way, if you want to erase a mark you made, you can by simply wiping it away with a damp cloth or damp paper towel... if it works.

So, we drew on our pumpkin. We let the lines dry before we took a damp cloth to wipe it away, but we scrubbed and scrubbed and couldn't get it to disappear. Sure, the lines were a little lighter, but they were still there, and the color from the marker was smeared all across the exterior.

We tried it again, using the damp cloth on the dry erase marker line right after it was drawn. We thought that maybe if we caught it while the ink was still wet, it would work, but it didn't.

We tried this hack last year, but we didn't get the exact results we thought we would. So, we're trying this again!

Several hacks online show that you can grab a cookie cutter, whatever shape you like. Then, place it against the pumpkin, hit it with a mallet to make a small indentation into the pumpkin. Remove the cookie cutter, and now you have a line to trace and cut through.

However, we've seen hacks where you can actually hit the cookie cutter all the way through, so you don't have to do any cutting at all!

This hack is NO BULL!

Last year, we tested out using an ice cream scooper to dish out the pumpkin guts instead of a spoon or shovel-like utensil that comes in the kits in most stores. It did grab most of the mess last year, so we went with NO BULL!

We've read that spraying a bleach solution on the exterior and interior of your pumpkin keeps it from rotting as quickly. We have not tested this yet. Have you?

Applying Vaseline with a Q-Tip to your carved-out designs is supposed to keep them moist and preserve longer. We have not tested this yet. If you have, let us know how it worked for you!

We met with world-renowned artist and pumpkin carver, Ray Villafane from Villafane Studios, and he told us that he pickles his pumpkins in white vinegar. In fact, he still has some pumpkins that he carved with ghoulish faces and designs in white vinegar tanks, and they've been preserved for years! He also told us that he sprays others that are sitting outside with water to keep them hydrated. We will test these options out and let you know how it works for us!

We've seen a fun trend where you can hot glue crayons onto the top of a pumpkin, blow dry them, and melt the colors, creating a fancy and decorative effect. We will also be testing this out to see if it can be an affordable alternative and efficient way to decorate for Halloween.

Real Simple has some other hacks too.

What other hacks have you tried? Is there a product you want us to test out? Let us know! We would love to hear from you!