Deal of the Day to the Bentley Scottsdale Polo Championship means you score HALF OFF! 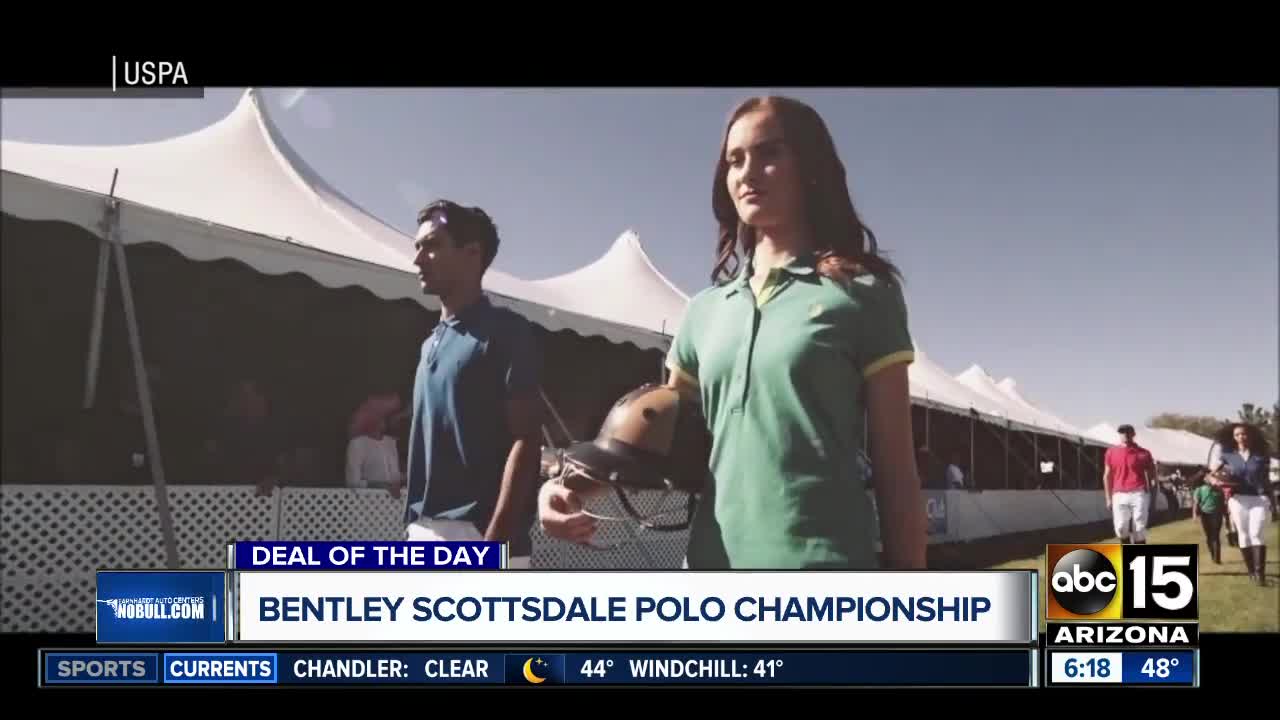 Don't miss this fancy deal of the day!

The Ninth Annual Bentley Scottsdale Polo Championship is back at WestWorld of Scottsdale this weekend!

The gates open at 10 a.m. on Saturday, November 2. So, get ready for one big party, packed full of the most interesting activities at a polo event.

General admission gets you access to a variety of tournaments from international teams to military members to local Arizona State University players. There will be all kinds of live music, and performances. Don't miss what event organizers are calling The World's "Longest" Fashion Show, put on by Phoenix Fashion Week. There will also be Canine Couture, a fashion show for dogs. Your Smart Shopper, Chelsey Davis, will be a guest judge for that one! Plus, it's free to those who purchase a ticket to get into the Polo Party.

You'll also get a preview of what's to come with the Scottsdale Arabian Horse Show in the new year and the Barret-Jackson 2020 Collector Car Auction.

Are you ready to go without paying full price? Get ready for this Deal of the Day!

You have until noon on October 31 to go online, and enter the promo code, "SMARTSHOPPER". Make sure that is all one word and in caps lock. The promo code is case sensitive. Simply select your quantity for "Saturday General Admission". Then, a new window will pop up. Enter, "SMARTSHOPPER" in the coupon code section, and continue to checkout!

It's important to note that our Deal of the Day is only valid on general admission, and does not include VIP.

Last year, this polo event had over 13,000 fans, so get there early! Parking is $5. So you can either pay to park, or use a ride share service.

The following schedule is a mashup of information sent from a press release and directly from the website. Here's what to expect on Saturday:

10:15 a.m.- The first match of the day is the General George S. Patton, Jr. Tournament, featuring the U.S. AirForce vs U.S. Marines

10:30 a.m.- There will be an acoustic guitar showcase in the Sanderson Lincoln Black Label Lounge.

11 a.m.- The Phoenix Symphony has a special oboe performance.

The next few matches continue throughout the day, picking up again around noon, and you can enjoy more musical showcases.

12:15 p.m.- The Arizona Polo Club takes on the Centtrip Wales Polo Club for the first time.

1:05 p.m.- At this time, you can catch a glimpse of new musical, "Americano", that will eventually hit the stage at the Phoenix Theatre in January 2020.

1:45 p.m.- Give them a round of a-PAWS! This is when you can watch "Canine Couture: A Dog Fashion Show Like No Other", presented by Lugari Pet Salon.

3 p.m.- There will be field-side Tango, near the Molina Tent.

3:45 p.m.- See what event organizers are calling the "World's Farthest Rugby Sevens Match", featuring local players from ASU. We are told that it's nearly two and a half times longer than normal. This will take place between the polo matches.

And, there will be the first ever charity match!

4:15 p.m.- The Polo Party's Charity Match features Southwest Wildlife and Arizona Equine Rescue. It's sponsored by EPR Polo LLC, and a $10,000 purse will go to the winning charity.

Nacho Figueras (known as "The Sport's Most Famous Player") and the Aspen Valley Polo Club (four-time defending champions) will be there!

Though, we're rooting for local, Natalie Grancharov Camacho! She's representing Arizona, and we've caught up with her in previous years! She's a full-time Area Manager in Ocotillo Technology Manufacturing for Intel in Chandler, and also loves this sport! She told us before that she loves controlling a one-thousand-pound horse, moving 20-30 miles per hour, and hitting a ball the size of a tennis ball. She also explained the difficulty of the game, stating it's as if you're trying to golf during an earthquake. So, we are wishing her the best of luck!

The new teams this year include The Marines, Air Force, and The Royal Berkshire Polo Club from England, whose first member was Prince Charles.

Event organizers are encouraging attendees to use this hashtag, #thebestpoloeventintheworld.