Bull or No Bull: Will the Socket Shelf live up to the claims, offering extra charging and shelving space? 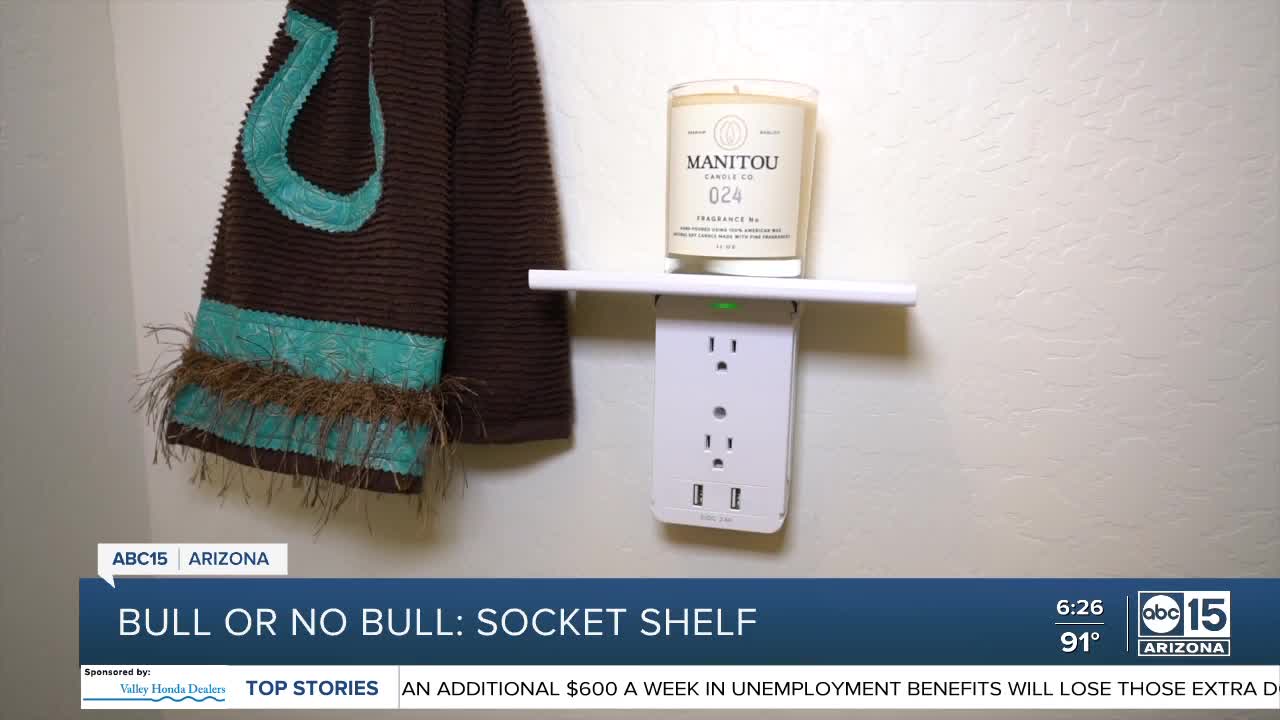 Does the Socket Shelf really work?

It's time to test out a product and let you know if it's Bull or No Bull!

In our home, our downstairs bathroom does not have a shelf. But, online, I think I might have found a solution. It's called the Socket Shelf!

Mine arrived in a box with some vague instructions that also had several grammatical errors, but we figured it out.

There are essentially two parts. There's the base that plugs into only vertical outlets. It is not compatible with horizontal outlets. The second piece is a reversible tray that transforms into a shelf once attached to the base.

The base triples the power options, offering six outlets. On top of those, there are also two USB ports!

I read that the Socket Shelf has built-in surge protection with an indicator light. As always, a green light is a good sign.

The Socket Shelf can hold up to two pounds. If you want it to hold more weight, there is a screw that comes with the product that you can put through the base and attach to the outlet bracket when you plug it in. You'll have to remove the screw from the face plate on the wall with this option though.

So, let's get to the test. We first removed the safety cover. Then, before plugging it in, we attached the shelf. There were no setup instructions, but we found that you simply slide the shelf on from the plug-side to the front.

Once the two pieces became one unit, we plugged in the Socket Shelf to the outlet in our downstairs restroom to start our test.

It held a candle. It held a soap dispenser. It held two iPhones. It held an iPad. The Socket Shelf felt sturdy, and the charge was strong.

It's important to note that the safety instructions state to make sure the equipment is turned off before plugging into the surge protector outlets. Once plugged in, turn them on.

Also, make sure you hold the Socket Shelf in place when unplugging your items so it doesn't pull loose.

I bought the Socket Shelf on Amazon for $16.99 before tax. The price may have changed since our purchase was made.

So, where does it rank on our Bull or No Bull Meter? I'm going with... NO BULL!

I can see how this would be useful in offering shelf space anywhere you might need it, like a restroom, kitchen, to act as a nightstand, in the garage, in an office and more.

Heads up though! The instructions say that this equipment can cause harmful interference to radio or television reception. If that does happen, you're instructed to turn it off, or unplug it. We did not test that claim.

I would love to hear from you! What do you want me to try before you buy? Email me!