Bull or No Bull: Testing out the Hook Its Hanging System 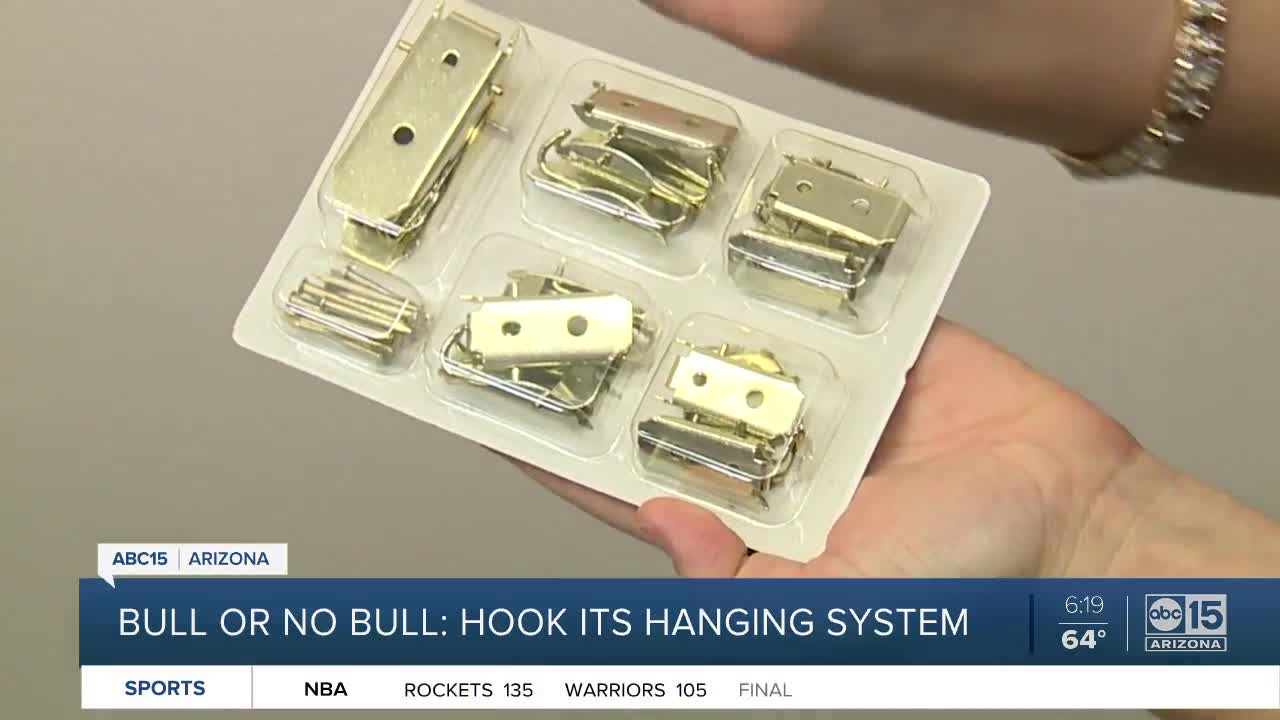 Bull or No Bull: Testing out the Hook Its Hanging System

It's time for the weekly "Bull or No Bull" segment, where we try it before you buy it! In this case, this week's product might leave you hanging (in a good way)... if it works!

Sometimes, hanging something up on the wall can be difficult. So, today, we're trying out a product that's supposed to help you hang frames, clocks, mirrors, decor and more!

It's called the Hook Its Hanging System. The commercial says, "The fast and easy way to hang anything, big or small, on your wall. With Hook Its, there's not need to look! Just hammer the nail, swing it out and hook." Click here to see the video.

This patented design allows the hook to grab and drop, holding whatever you want to hang in place, and it's supposed to "fit snug" against the wall. We have some testing to do!

Our package is a 32-piece set. "But are they strong? Hook yeah!" That part of the commercial made me laugh. I appreciate the pun, and we'll see how strong it really is.

We have eight small hooks, allegedly able to hold up to 25 pounds each, six medium hooks that are supposed to hold up to 60 pounds each, and two large hooks that hold "up to 75 pounds". You'll see that verbiage all over the site and on the packaging in bold lettering. The pack also comes with 16 nails.

Starting with the small hook, we nailed it in at a downward diagonal angle, as instructed. Then, we put the hook out 90 degrees, and hung a picture frame. It was easy, and it worked, but it was definitely not flush with the wall.

Another part of the commercial that made me chuckle was when a woman put on a sleep mask to cover her eyes, and turned with her frame. She then placed it up against the wall, near where the Hook Its Handing System was installed, and the picture hung perfectly. I understand why they wanted to portray just how easy it is to install. I attempted to hang a clock with my eyes closed, and it worked. It was simple to do.

Now back to the other aspects of our main testing. We used the medium-sized Hook It, nailed it in, just like we did with the smaller one. Then, we hung up heavier, fancy decor with an nontraditional opening for a hook to latch onto. It still worked, and it held strong.

Time for the big test, literally and figuratively! We put around 60 pounds in a crate. We nailed in two big Hook Its to the wall, and when we placed the crate with weight, we were pleasantly shocked! It was secure! When we took the crate off though, the Hook Its were extremely loose.

Since a single large Hook It is supposed to hold up to 75 pounds on its own, we nailed a single Hook It into another part of the wall and tried it again. This time, when we placed the crate, it fell immediately.

Another claim is that Hook Its are supposed to be damage free. That's not true either. If you don't have an anchor in, and that's not required, by the way, the Hook Its can move and harm the wall. Ours definitely had damage, not only from when the heavy weight fell, but from when we removed each Hook It from the previous tests.

So, where does the Hook Its Hanging System rank on our Bull or No Bull Meter? I'm going to... let you decide!

It lived up to the claim of being able to hang things easily. However, it could not live up to the claim of holding up to 75 pounds without additional support, did leave damage behind, and whatever was hanging was not flush against the wall. I'm leaning toward saying "Bull" since there are other better products out there. But, if you want to hang a small frame or some decorations, this could do the trick.

On the As Seen on TV website, the Hook Its Hanging System is out of stock, and can be added to a "Wishlist". On Amazon, there are three left in stock, priced at $4.96. There's one left in stock at Walmart for $15.99.

What products do you want me to try before you buy? Let me know! And if you try this product, I would love to hear your review as well.