Bull or No Bull: Testing out the Dash Go Rapid Egg Cooker! 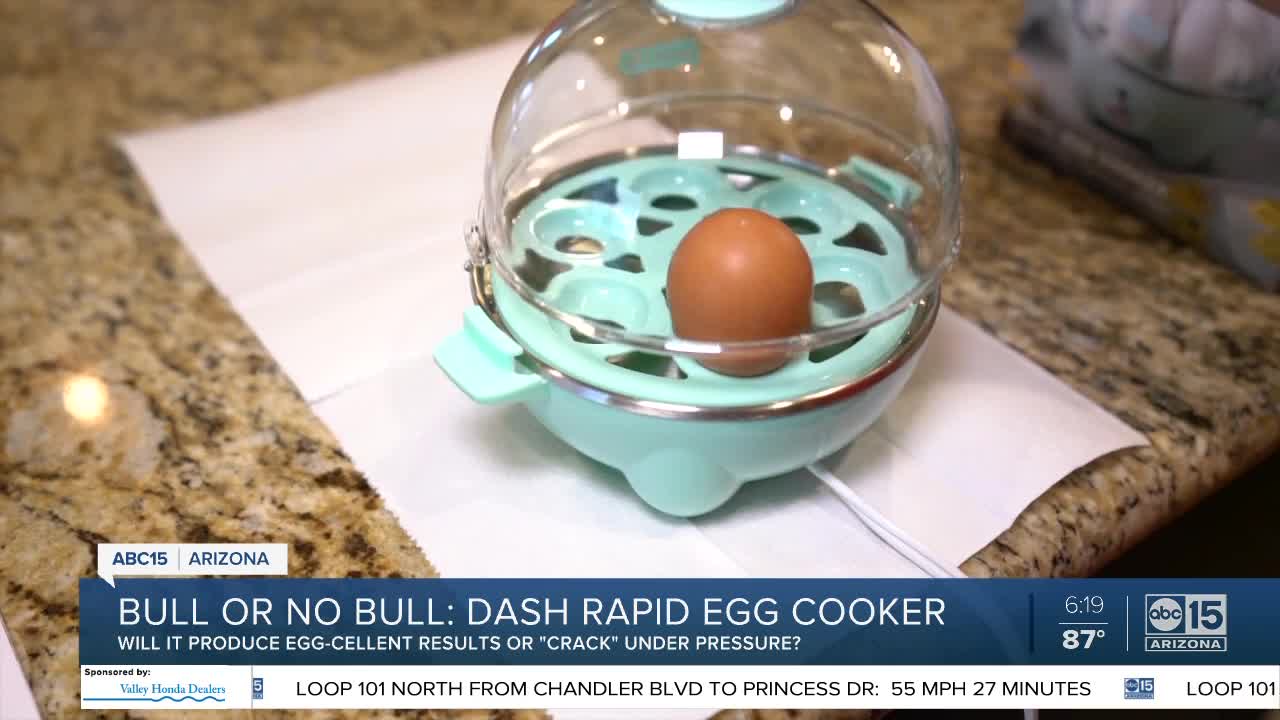 Does this egg cooker really work?

Many of you have written to me requesting that I test out various egg makers. So, I'm trying the Dash Go Rapid Egg Cooker, and I'll let you know if it's Bull or No Bull!

I checked it out online, and found an easy-to-follow instructional video, with a narrator immediately claiming, "Make six eggs faster than you can boil water." So, I decided to order it. I'll admit, when it arrived at my door, I was EGGS-cited to see if it would CRACK under pressure.

It came with a very thorough manual, including safety information, as well as recipes. After reading through, I hand washed the Dash Go Rapid Egg Cooker. The manual states the parts can go into the dishwasher, but I decided to hand wash what I was going to use instead. I let it all dry, and then it was time to get started. Needless to say, it was EGGIN' me on.

The Dash Go Rapid Egg Cooker can make six boiled eggs (soft, medium or hard), two poached eggs, scrambled eggs or one omelette. We decided to do two tests with one egg each.

First up, it's time to go hard, hard-boiled egg, that is. I switched up the directions slightly. I filled the measuring cup to the line that said "hard". You can make your eggs soft or medium as well. If you prefer that, just fill to those lines instead.

Then, I poured that water onto the heating plate. I placed the boiling tray on top of that. I chose to not attach the boiling tray handle for the purposes of capturing video, and, here's a spoiler, it still worked out great! Anyway...

Bottom's up! Place the egg bottom-side up onto the boiling tray, put on the lid (and DO NOT lock it into place), plug in the device and hit the power button.

Since we wanted our egg to be hard-boiled, it said it would take around 12 minutes to cook.

After just 10 minutes, the alarm went off on the Dash Go Rapid Egg Cooker indicating that it was done! By the way, reviews online say the alarm makes an awful screeching noise. Ours was not like that at all. In fact, it was a pleasant tune.

I turned off the device and unplugged it. Then, with an oven mitt, I removed the lit, and used tongs to remove the egg from the boiling tray and to place into an ice bath.

After just a few minutes of cooling, I peeled off the shell, cut the egg open, and it was literally EGG-cellent! It was actually the most perfect hard-boiled egg I've ever made.

Onto the next test, a poached egg!

I coated the poaching tray with a little bit of almond oil. That's my preference, but you can use any oil. After that, I cracked one egg into the poaching tray, and placed that on top of the boiling tray. The lid went on, the device was plugged in, and I pressed power!

The poached egg cooked for about five minutes. Then, you rang? That pleasant alarm sounded off again!

I turned the device off, removed the lid, and the perfectly poached egg slide right onto the plate! I cut open the middle, and it was as if I was at a fancy restaurant or on a cooking show. There was an ooey gooey center that was literally EGG-stravagant!

So, where does the Dash Go Rapid Egg Cooker rank on our Bull or No Bull Meter? I'm going with... NO BULL!

Have you used this product before? What else do you want me to try before you buy? Let me know! I love hearing from you!