Bull or No Bull: Testing out life hacks to make candles, open a drink in a glass bottle, and more! 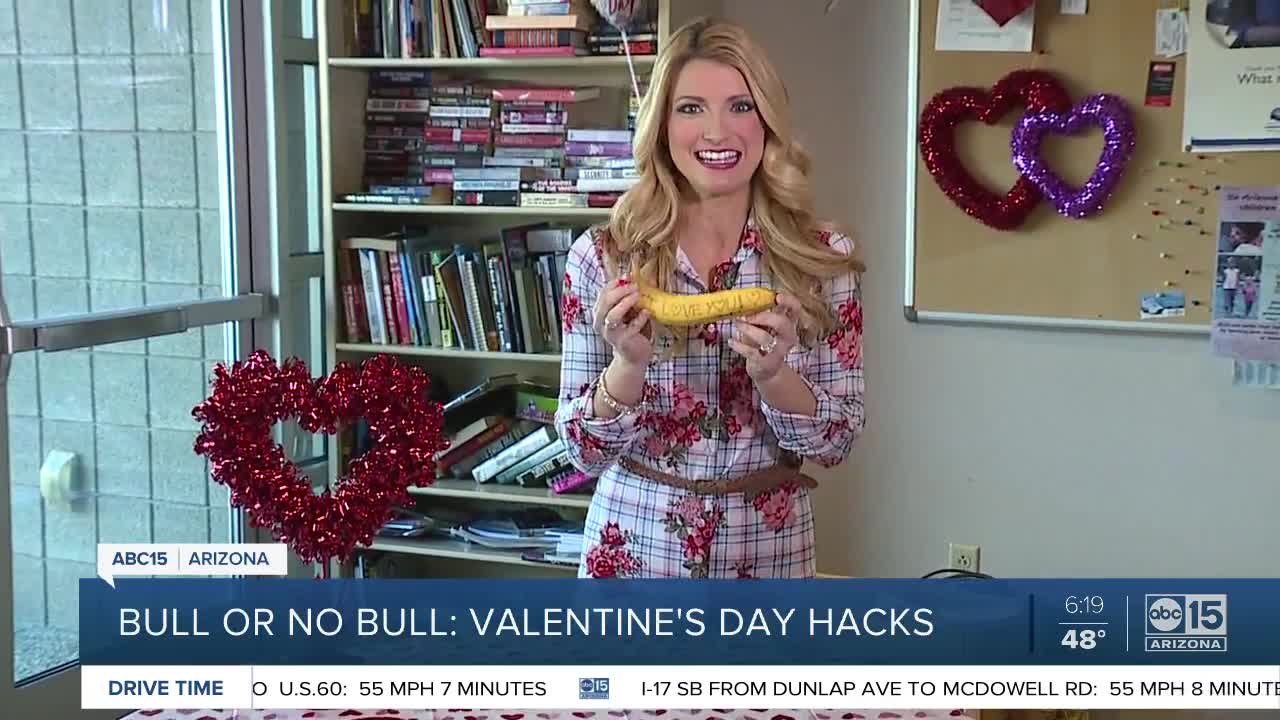 Truly, you don't need a Valentine to do any of these hacks, but in the spirit of the holiday... You know that George Strait song, "Check Yes or No". Well, instead of checking "yes" or "no", I'll let you know if these hacks are Bull or No Bull!

It is Valentine's Day, and love is in the air. If you're wanting to do something special for a special someone, we are testing some do-it-yourself ideas, so you don't have to spend extra cash, since you might just have these items around your home already!

Truly, you don't need a Valentine to do any of these hacks, but in the spirit of the holiday... You know that George Strait song, "Check Yes or No". Well, instead of checking "yes" or "no", I'll let you know if these hacks are Bull or No Bull!

Have you ever wanted to set the mood, but realize you don't have candles? You may be able to use an orange to express your peelings! I mean... FEELINGS!

MAKE A CANDLE OUT OF AN ORANGE:

You're supposed to cut the orange in half. Then, take the fruit out of the peel, but leave the stem in tact, as that will become your wick. Pour in Olive Oil, also saturating the stem. Grab a lighter, and place the fire against the stem. There should be a spark!

When we tried it, nothing happened at first. We tried three different times, using different halves of several oranges. We even attempted lighting the stem that stuck out of the exterior of the orange. And, nothing! It didn't work at all!

Like every relationship, no two oranges are the same. Even the halves were different. On our final try, the conditions of the gutted fruit and stem were perfect because of how cleanly the pulp came out. Let's see if fourth time is the charm!

NOPE! We were shocked. We had seen so many videos where this worked. We waited about 10 minutes for the fruit to soak in some of the oil, and that did the trick. It finally worked, igniting a flame similar to the one between you and your main squeeze!

The candle lasted for a while too, and the flame grew bigger. It also had a subtle and refreshing citrus smell.

WRITE AN A-PEELING MESSAGE ON A BANANA:

Do something thoughtful for your significant other. If this works, you can leave a fun, "mushy", message for your other half.

Grab a banana. Take a tack, needle or safety pin, and make sure it's clean. Gently, poke little dots into the banana peel, to form a message. It browns instantly, revealing your note!

We wrote, "I love you". You could also write, "I'm bananas for you". That would be better than it reading, "You drive me bananas". But, we'll leave that up to you.

I'm going with... NO BULL! And it's a double win. They get a nutritious snack, and a thoughtful gesture, both good for the heart, mind and soul.

POP THE TOP OFF A BOTTLE USING A CAN OF SODA:

How about a drink to toast your love? If it's a glass bottle, and you don't have an opener, this hack may help... if it works!

Take a can of soda, and use the rim of it to pop the cap of your bottled beverage. It took us several minutes, several tries, and a lot of force. But eventually, it came off!

Be careful if you decide to try this. It's easy to accidentally miss, and cut your finger on the bottle's cap. Those ridges are sharp.

Because it worked, I have to say... NO BULL! However, I don't recommend it. There are much easier options out there if you don't have a bottle opener. We've seen people open bottles using their rings, the edge of a table, a shoe like a boot or heel, and other ways!

I will be testing out another hack that shows a folded dollar bill opening the bottle. I'll let you know the outcome.

What other hacks do you want me to test? Let me know!

In the meantime, I hope you enjoy these LOVEly hacks.