Bull or No Bull: Testing out Flex Glue Clear 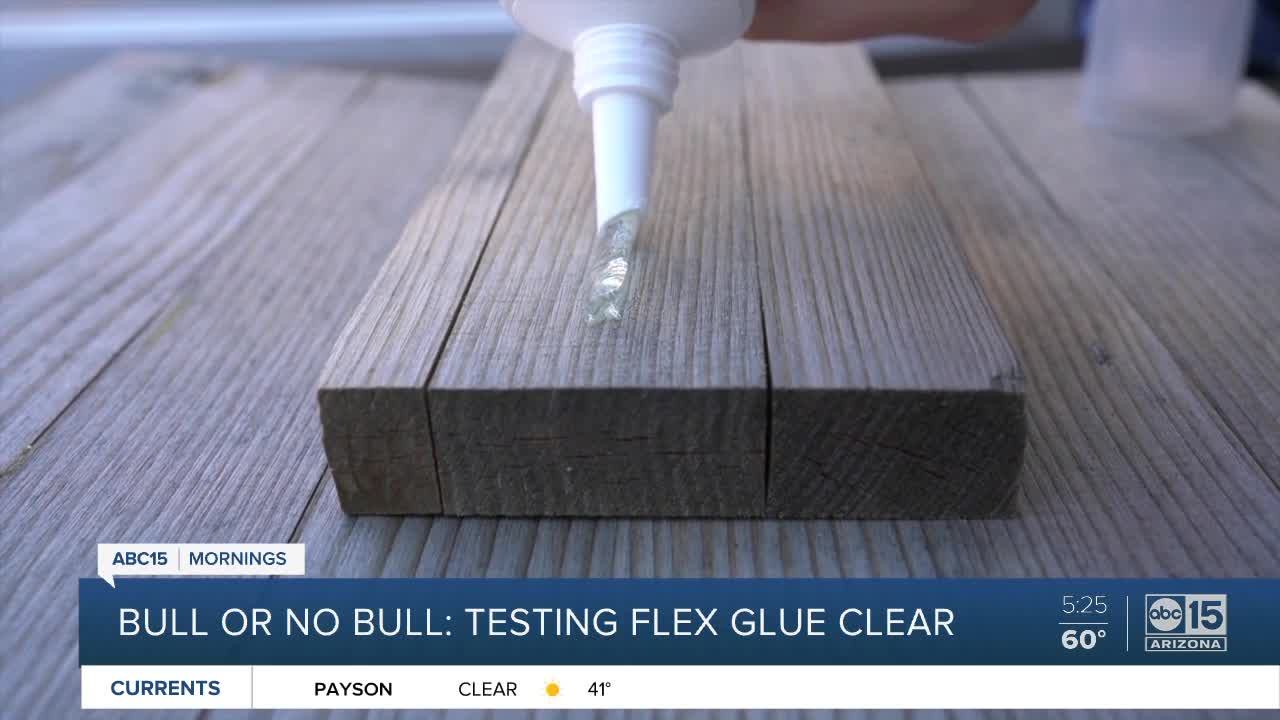 I'm your Smart Shopper, Chelsey Davis, and I'm doing my part by working from home. I went outside to my backyard the other day and noticed the patio furniture fell onto our fire pit and knocked off some of the decorative stone. Maybe this product can fix it!

It's called Flex Glue Clear! In the commercial, Phil Swift describes it as, "the crystal clear rubberized glue with amazing instant grab. It locks into place and holds on tight." Believe me when I say this commercial is one to watch. Click here to view.

I can confirm that, like the claims state, it's definitely not thin or runny. It's very thick. I placed some glue onto a small wood piece, and then placed it on another wood piece. It adhered quickly, in shorter time than the 10-to-30 seconds stated on the instructions.

We tried it on two bricks though, and well... They fell like a ton of bricks. However, I have no doubt after 12 hours, or even a full week of curing time as directed, those could have built a brick house. Cue the rim shot or possibly the sad trombone.

"No matter what you glue, you can see right through," the commercial shows.

So, I took two clear containers, put glue in the middle on one end, and smushed them together. Not only did they stick, but to my surprise, the glue was actually clear, minus a couple of air bubbles. And depending on what clear object you try this on, it could turn it into your own fun-house mirror.

"Flex Glue Clear's high-tech formula won't wash away, and it even works underwater," said Phil in the commercial.

We filled the clear container with water and tried to glue a golf ball and rock inside and under the H2O. The golf ball didn't stick at all and wiggled its way free. But, when I tipped out the water and turned the container upside down, the flat rock stuck. Needless to say, it was ROCK SOLID.

"Nobody would be crazy enough to build a boat out of glass. But, I would!" Phil Swift exclaims in the video. The footage goes on to show him and other helpers constructing a boat out of glass using only Flex Glue Seal to keep it together. Then, Phil takes the glass boat out for a spin on the ocean. It's important to note that it says, "DO NOT ATTEMPT" in small font on the left corner. So, we won't either. Though, I have to admit, I'm honestly tempted.

Now back to that decorative stone I mentioned in the beginning. We applied the Flex Glue Clear to the stone and the fire pit, and it all stuck together with ease to make the repair.

The Flex Glue Clear is also supposed to be mildew-resistant and shouldn't shrink. We do not have the results to those claims yet.

We bought ours on Amazon for a total of $13.99. So, where does Flex Glue Clear rank on our Bull or No Bull Meter? I'm going with... NO BULL!

As more and more people are home right now, some may discover items that need to be fixed. Depending on the project and the problem, Flex Glue Clear may be the solution.

Let me know what other products you want me to try before you buy!