Bull or No Bull: Is this double-sided tape actually washable and reusable? Testing Ivy Grip Tape! 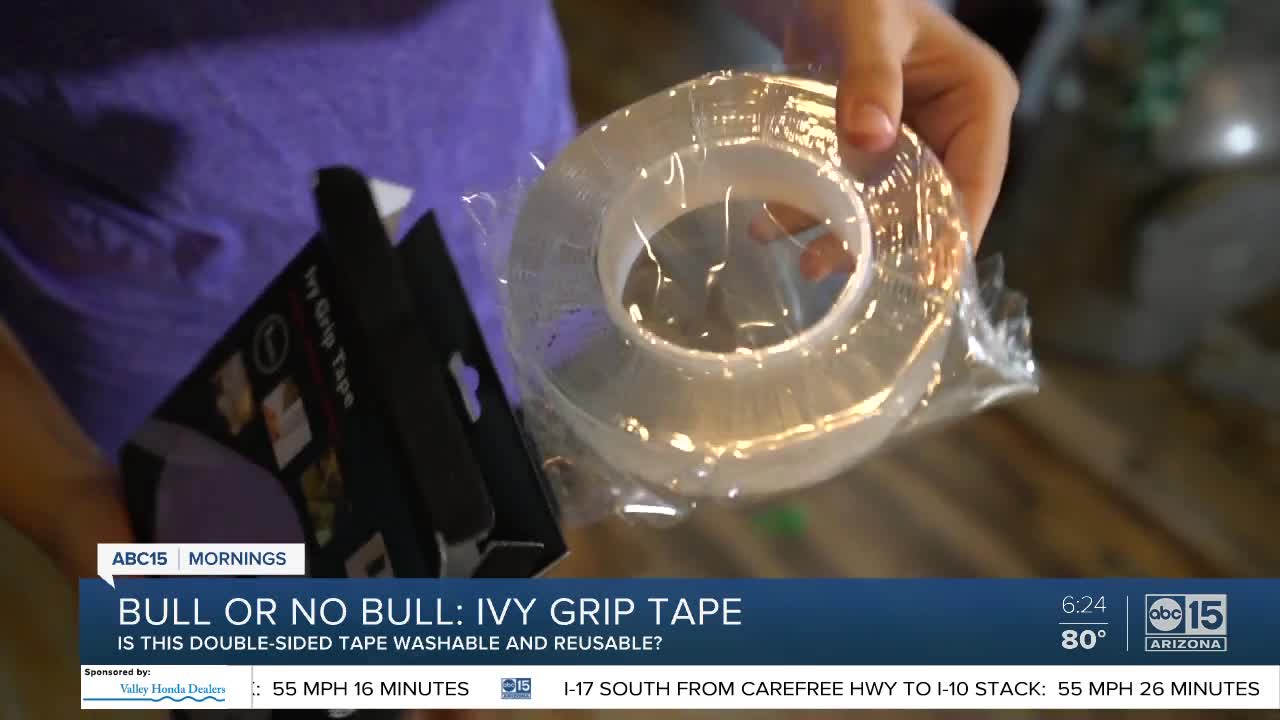 Today, I'm testing out the Ivy Grip Tape. It’s double-sided tape that’s supposed to be washable and reusable. I will let you know if it’s Bull or No Bull!

I opened up the package, but there were no instructions inside. Since I ordered the Ivy Grip Tape on Amazon for nearly $13, I went there and found some directions.

Step one, clean the surface. So, I wiped down the wall and also the painting we were about to hang.

Next up, we cut the tape to be the right size, stuck it onto both sides of the back of the painted canvas.

Then, I removed the outside film, and it was time to hang on the wall!

At first, I was not impressed -- it didn't stick to the wall at all. So, I rearranged the same two pieces of tape from the sides to be on the top of the backside of the painting.

After the second attempt to rehang, it stuck the landing! I even tried nudging it a few times, but it held firm.

On the box, it shows pens, remotes, and phones all hanging on a strip of tape on the wall. So, we tried hanging a pen, car keys and a cell phone. To my surprise, all three totally stuck right away! Maybe too stuck?

The phone rang, and I went to grab it off the wall, but it wouldn't budge. I had to pry the phone out of its case to answer it, saying, "Hey, let me call you back! I'm in a sticky situation." Cue the rimshot...

After some muscle, I was able to remove each item from the Ivy Grip Tape on the wall. None of the objects were damaged, nor was the wall when I removed the tape from it. Plus, there was no sticky residue on anything! Again, I was pleasantly surprised. We had the same results when I removed the painting and tape from the wall as well.

The instructions say Ivy Grip Tape can also be cleaned and reused. Just rinse it under water, and let it dry. The viscosity will return after it dries for a few minutes.

I was actually able to remove dirt and some debris from the tape by simply rinsing it and rubbing the tape in my hands under a running faucet. I draped the Ivy Grip Tape over the edge of the pedestal sink, and let it dry a few minutes.

I took that same piece of tape, stuck it back onto the painting like we did earlier, and hung it on the wall with ease. Again, I nudged it a few times and from a few different angles to make sure it would stick, and it did!

By the way, it was a horse painting. And yes, I joked that, "There are no long faces here with these results!" You really can rinse and repeat!

The Ivy Grip Tape is supposed to be reusable up to 600 times. Though we didn't test that specific claim, it lived up to all of the other ones in our tests.

So, where does the Ivy Grip Tape rank on our Bull or No Bull Meter? I'm going with... NO BULL!

Click here to see an informational video that showcases how else you can use the Ivy Grip Tape on rugs, furniture, and more!

I must add that this tape is almost as thick as a wooden ruler. When you cut it, do so in small scissor snips. I was aiming for one big chop on my first attempt, and I had to put everything down and pull the tape and scissors apart. So, be careful!

What product do you want me to try before you buy? Let me know!