Death at Coronado Elementary School being investigated as homicide

The Cochise County Sheriff's Office is investigating a death at a Sierra Vista elementary school as a homicide.

On Tuesday morning, CCSO placed a Hereford elementary school on lockdown due to reports of an active shooter on campus.

According to neighboring Sierra Vista Unified School District Facebook, the incident involved a male student who shot himself to death. 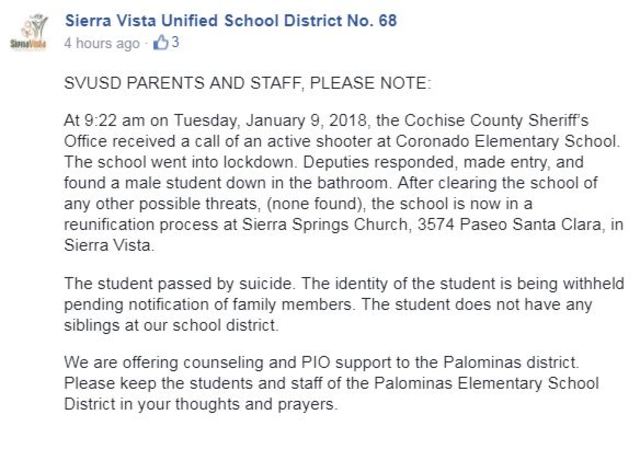 About an hour after the original posting by the Sierra Vista School District, the post was updated to remove the line stating the student passed by suicide. 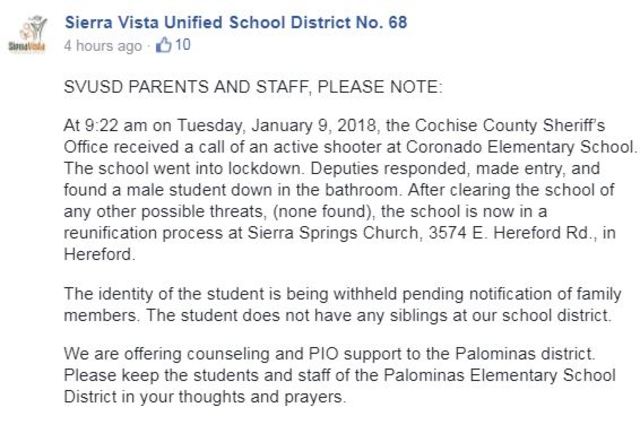 The Cochise County Sheriff's Department explained the school originally called to report an active shooter, but once deputies went into one of the bathrooms, they found the body of a 14-year-old boy deceased from an apparent gunshot wound.

CCSO says they are investigating the death as a homicide until proven otherwise.

Once deputies cleared the school for possible threats, they allowed parents to pick up kids at Sierra Springs Church, 3574 E. Hereford Road in Hereford.

The Palominas School District Superintendent said the school will be in session tomorrow and there will also be counselors available to students and staff.

Stay with KGUN9 and KGUN9.com for the latest in this developing story.