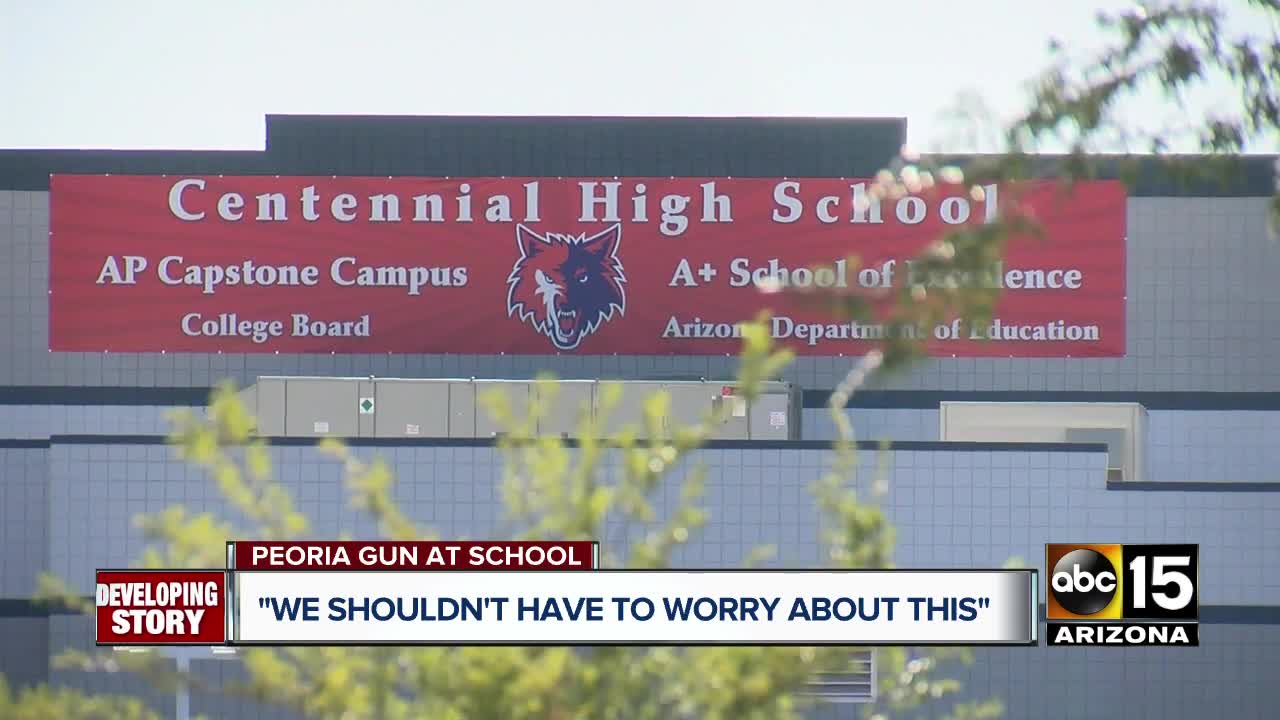 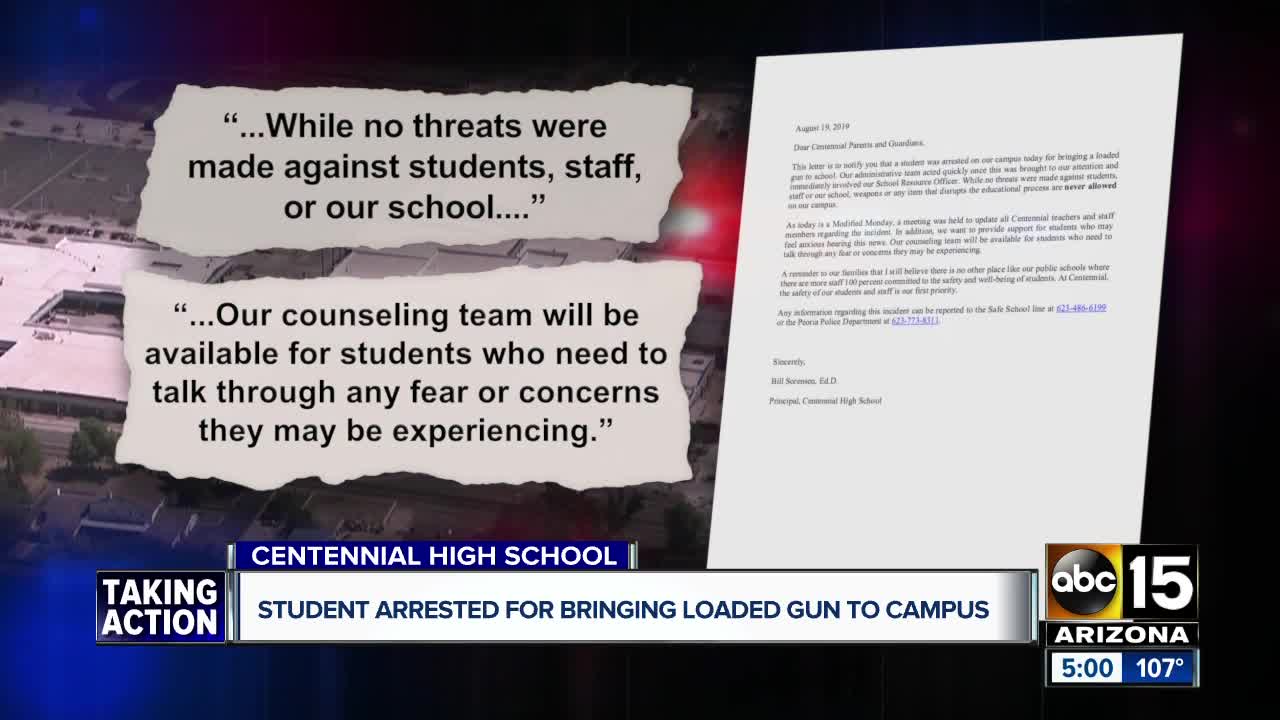 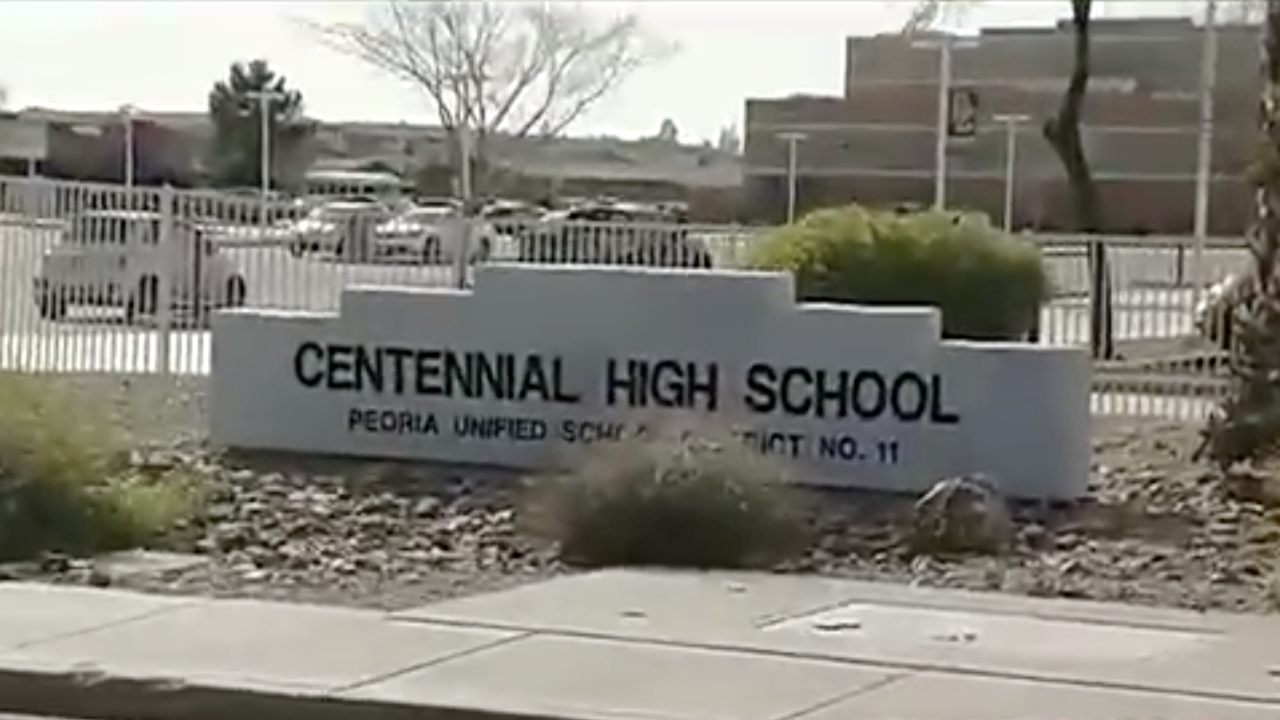 PEORIA — A 16-year-old boy was arrested for allegedly having a gun on campus at Centennial High School Monday morning.

Peoria police say the teen was located around 10 a.m. in a restroom on campus smoking marijuana wax.

The student was then escorted to the school office where he allegedly told staff that he had a gun in his backpack.

“I believe it was a Smith and Wesson 9 mm handgun,” said Brandon Sheffert, with the Peoria Police Department. “He told us that he received [the gun] from somebody in the morning, put it in the backpack and then went to school,” said Sheffert, who stated the teen could not produce the name of the person he got the pistol from.

The 16-year-old never made any threats on campus or social media, and the school was never on lockdown. “Because we were immediately able to secure that weapon,” said Danielle Airey, spokesperson for Peoria Unified School District.

The presence of the pistol though was enough to unnerve parents. “It sucks that we have to worry about this every day. I was worried when dropping them off on the first day of school, and not because they are going to school, but because anything can happen,” said Alexis Muñoz, whose daughter is a sophomore at Centennial.

“It just makes us all a little nervous for sure,” said Adam Stanley, who has two daughters at the high school.

Peoria schools, police, and parents are now pondering how to prevent another gun from making its way on campus.

“The only thing that came to my mind was metal detectors,” said Stanley. “I feel like we shouldn’t need one but we do,” said Mya Muñoz, a sophomore at the school.

“Some things like [metal detectors] could help, but at the same time the school district has done some things to try and ramp up security at their campuses, like making central entrance points and whatnot,” said Sheffert.

Parents are now talking to their kids about how to survive a shooting at school, but also refusing to live in fear.

“I know they’re doing everything they can to keep them safe,” said Muñoz.

The student was booked into the Durango Juvenile Detention Center on a charge of carrying a weapon on school grounds and drug charges.

Officials say the student will go through the hearing process before being allowed back at school, suspended or expelled.

Centennial High School says the letter below was sent to parents about the incident:

This letter is to notify you that a student was arrested on our campus today for bringing a loaded gun to school. Our administrative team acted quickly once this was brought to our attention and immediately involved our School Resource Officer. While no threats were made against students, staff or our school, weapons or any item that disrupts the educational process are never allowed on our campus.

As today is a Modified Monday, a meeting was held to update all Centennial teachers and staff members regarding the incident. In addition, we want to provide support for students who may feel anxious hearing this news. Our counseling team will be available for students who need to talk through any fear or concerns they may be experiencing.

A reminder to our families that I still believe there is no other place like our public schools where there are more staff 100 percent committed to the safety and well-being of students. At Centennial, the safety of our students and staff is our first priority.