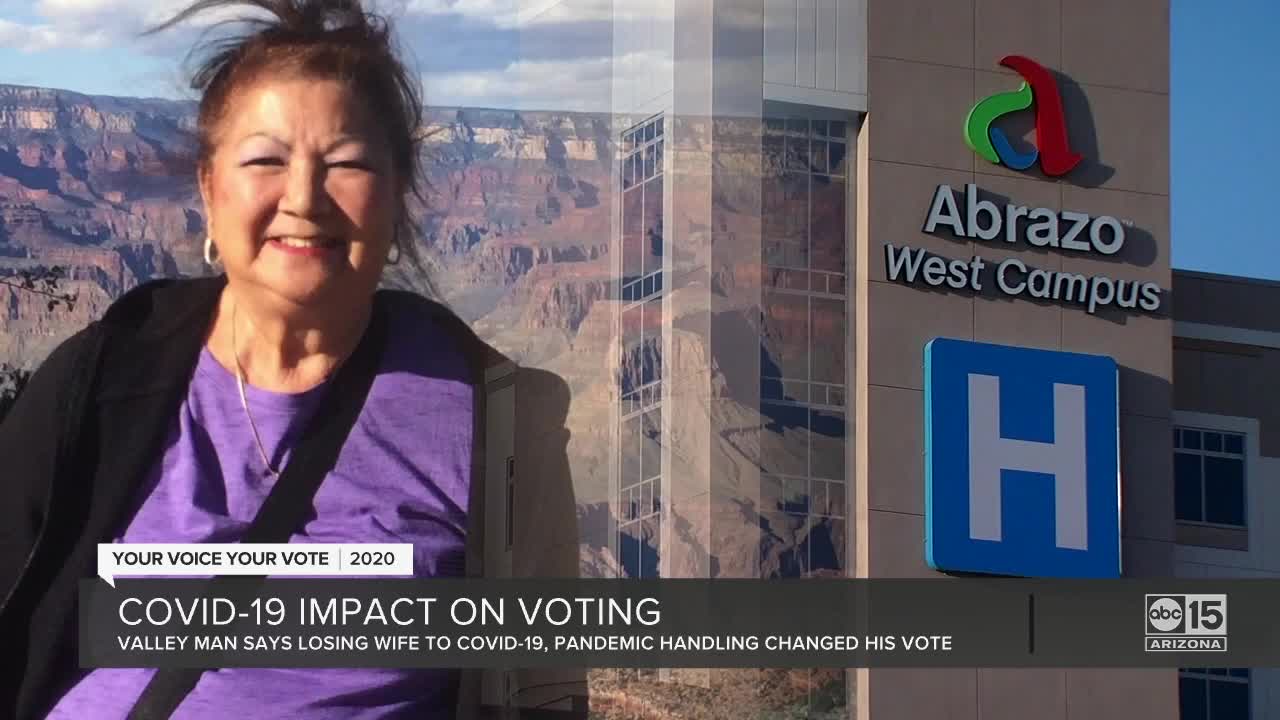 GOODYEAR, AZ — Soon people across the country will begin casting their ballots for President of the United States.

While the Supreme Court vacancy certainly will influence people's votes, COVID-19 and the current administration's handling of the pandemic will play a significant role in who people choose in the voting booth.

For Dave Dahlstrom, a lifelong conservative, his upcoming presidential pick and pandemic are now personal.

Dahlstrom is a retired Air Force veteran who now lives in Goodyear. His wife of more than 30 years, Cindy, spent her entire career working for the federal government, most of it with the Department of Defense.

"She had a real strong sense of giving," said Dave, speaking about his wife.

Every week after she retired, Cindy would spend hours working at a kitchen that served homeless men and women on the west side of Phoenix. "She looked forward to it every single week," said Dave.

The couple spent much of their retired lives traveling. "We traveled once a week, every month," said Dave. "Her favorite places were Honolulu, LA, Las Vegas."

COVID changed their summer travel plans. In late June though, Cindy got on a flight at Sky Harbor up to Denver. She was meeting up with Dave, their daughter, and grandkids, who were moving west from North Carolina.

"It was really important for her to do that. But she understood the risks. She was an exceptionally cautious woman," said Dave.

But even caution could not prevent the grandmother from catching COVID. "She probably touched her eye somewhere along the line and contracted the disease," said Dave. "The next day she started complaining about altitude sickness."

The 72 year old's only underlying condition was from a prior battle with valley fever. "So she had a left lung that was scarred," said her husband.

Dave said just four days after she flew out of Sky Harbor she was on a ventilator at Abrazo West. "She went through the full protocol to even include the convalescent plasma, and she died on July 6."

Just 15 days after she caught the virus, Dave sat alone by her hospital bed, fully covered, holding the hand of his wife of more than 30 years.

"They pulled the ventilator. Two minutes later she passed away," he said. "It was just a dynamic I would never wish on anybody. It was just terrible."

Now Dave, who voted for President Trump in 2016 is "switching my vote to Biden in November."

Dave said he understands people are suffering economically and mentally as a result of the pandemic and believes things should re-open with "safety precautions."

But the veteran says he thinks leaders downplaying the virus led to more people passing away.