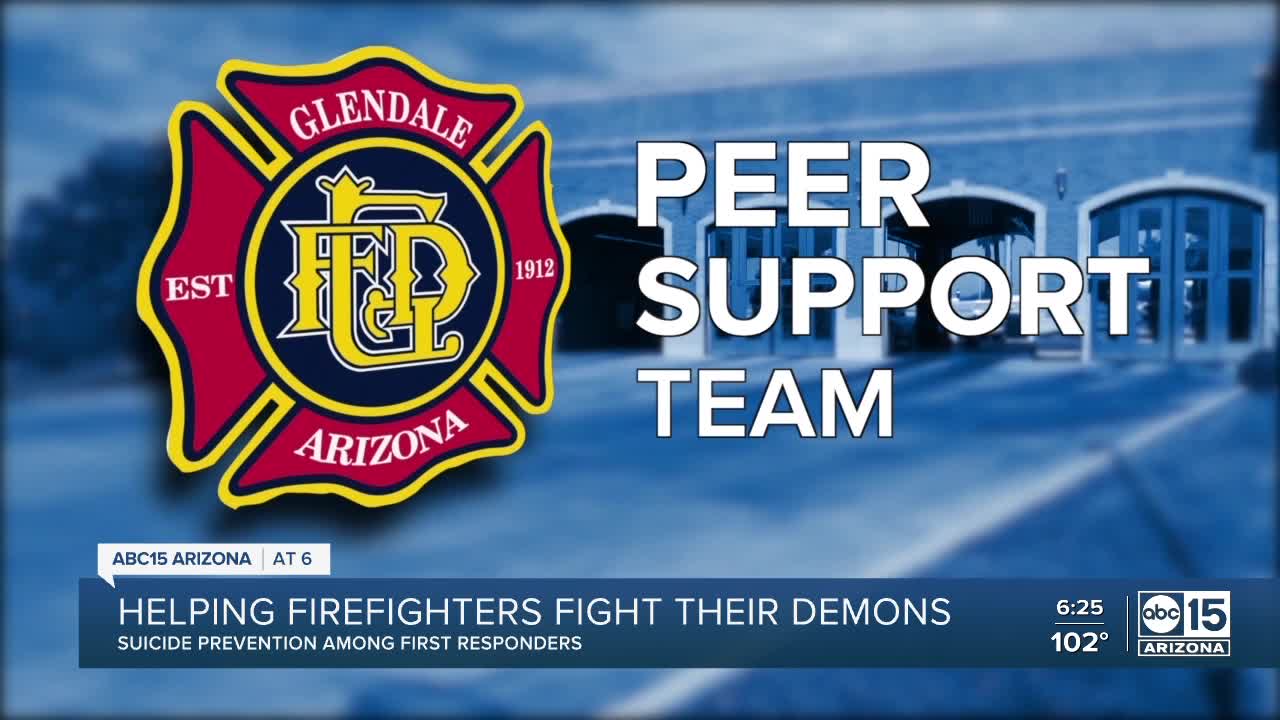 GLENDALE, AZ — The Glendale Fire Department is tackling a silent killer head-on by bringing a very sensitive and important topic to the forefront.

"The suicide rates for firefighters are skyrocketing," said Captain Ashley Losch with the Glendale Fire Department. Studies show first responders are more likely to die by suicide than anything else in the line of duty. It was a silent killer impacting the lives of our community heroes.

To help erase the stigma associated with talking about mental health, the Glendale Fire Department is showcasing its peer support program in place to help each other out in a time of need.

Considered one of the busiest fire departments in the U.S. that receives more than 44,000 calls each year, firefighters are exposed to countless challenging, often tragic situations. That breaks down to about 120 calls a day. Glendale officials say firefighters are at greater risk for depression, PTSD, and other mental health issues.

Thanks to a grant from Blue Cross Blue Shield of Arizona, the Glendale Fire Department has been able to create a unique peer support and counseling group to address the mental health challenges facing the industry.

This includes training 20 firefighters to recognize trauma and how to approach colleagues to urge them to seek support and an on-staff doctor who is available to meet with firefighters and their families if they need further support. About 20 percent of the Glendale Fire Department has met with the doctor to open up a conversation about mental health amongst the entire department.

Captain Ashley Losch said it was a tough subject to talk about, but it needed to be brought to the forefront.

"Firefighters are trained. It is ingrained in us that we are the fixers. We are the ones that when someone has a problem, you come to us. We find a solution," said Captain Losch.

Considered the ones who run toward danger when others run away from it, Losch says they have a saying, "don't be a dead-end, if someone comes to you with a problem, you need to have a solution."

Behind the brave front though, Losch said sometimes there could be growing unrest. The fire captain herself struggled with it, although she did not realize what she was going through actually had a name.

"It was like a light bulb went off for me. I'm sitting in this training and she's saying, 'have you ever had a call run through your head that you can't rid of? Have you ever just played the horrible moment over and over? Well, that's PTSD.' I had no idea that's what I was actually experiencing," said Losch.

Some of the calls that haunted her included seeing deceased children during calls for help, and babies they were unable to save because it was too late.

"You don't want to share these visions with anybody. You don't them to have to see what you have seen. It is hard to talk about, so we withdraw. A little bit of you goes, am I just weak? Should I just suck it up?" said Losch.

She said her fellow firefighters were often hesitant to ask for help.

"There's a stigma with it. We're the heroes, I hate that word, but we're supposed to come in and fix it, and when we're not able to admit that we need to be fixed, and it becomes a problem.

Losch says she learned a valuable lesson through her training and personal experiences.

"You are not weak. It actually takes so much more strength to ask for help," she added.

According to the Arizona Health Department, last year the state lost 1,400 citizens to suicide.

Help is available for anyone who needs it: