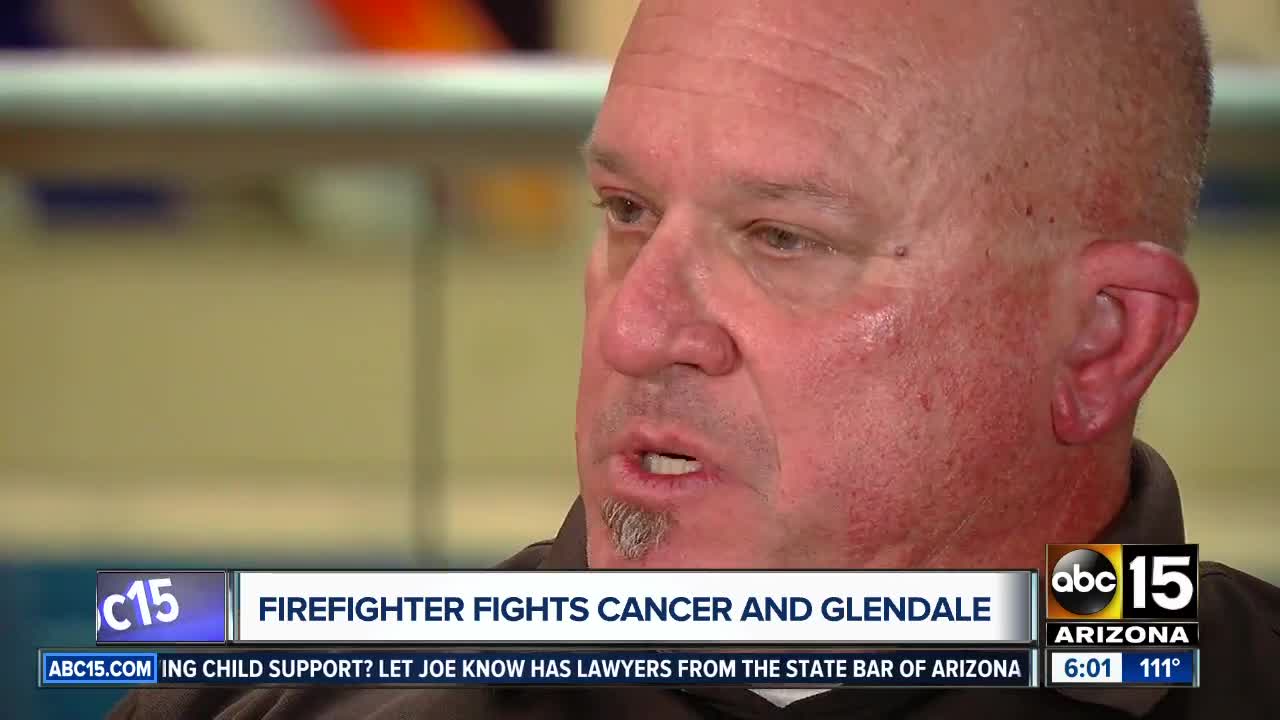 GLENDALE, AZ — Over the course of his 26-year career, Glendale Fire Captain Kevin Thompson has answered the call to hundreds of fires. In April, Thompson was diagnosed with multiple myeloma, known to many as the cancer common among 9/11 first responders.

"I'll be honest," Thompson said, "the story I rather be telling right now is how grateful I am for the overwhelming support my city is giving me and my family during the fight of my life. But that's not the story I have to tell."

Multiple myeloma is on the list of presumptive cancers, included in an Arizona law, for which first responders are covered by worker's compensation. State Senator Paul Boyer (R-Glendale) authored the bill when he was a state representative two years ago.

"It's there to cover them when, in fact, they get cancer on the job," Boyer said.

The city denied Thompson's worker's compensation claim. It has denied to explain why, citing the federal medical privacy law HIPAA.

A spokesperson for the city said Thompson's case is the fourth cancer compensation claim it has considered. One was accepted the other two were withdrawn by the firefighters who made them.

"They're pointing their fingers behind insurance carrier administration hearings, when the reality is the buck stops with Glendale," Boyer, who has been critical of the city's denial of Thompson's claim, says.

This week, Boyer accused city leaders of violating the law and jeopardizing Thompson's life. Glendale sees it differently and has posted a response to Boyer's criticisms on its website.

Thompson, meanwhile, balances light duty at the fire department with weekly chemotherapy sessions. It's expensive. He is still covered by his insurance as a firefighter, but the out-of-pocket costs were several thousand dollars.

He says if he received worker's compensation, his chemotherapy would be covered. He will need to have the weekly chemotherapy treatments for as long as he lives.

"There are dark moments when you are diagnosed with an incurable cancer," Thompson said. "Personally, it's been drilled home to me I've been made fully aware that I have a shelf life."

Thompson says he will appeal his denial to the Industrial Commission of Arizona. The city of Glendale says it's confident the commission will render a correct and fair decision.

Currently, Thompson is one of at least nine Arizona firefighters who are in effect fighting local governments for a benefit they believe they earned and deserve. Other Valley cities which have hired third-party administrators to handle cancer claims include Phoenix, Chandler and Goodyear.

Mesa has said it will accept presumptive cancer compensation claims.