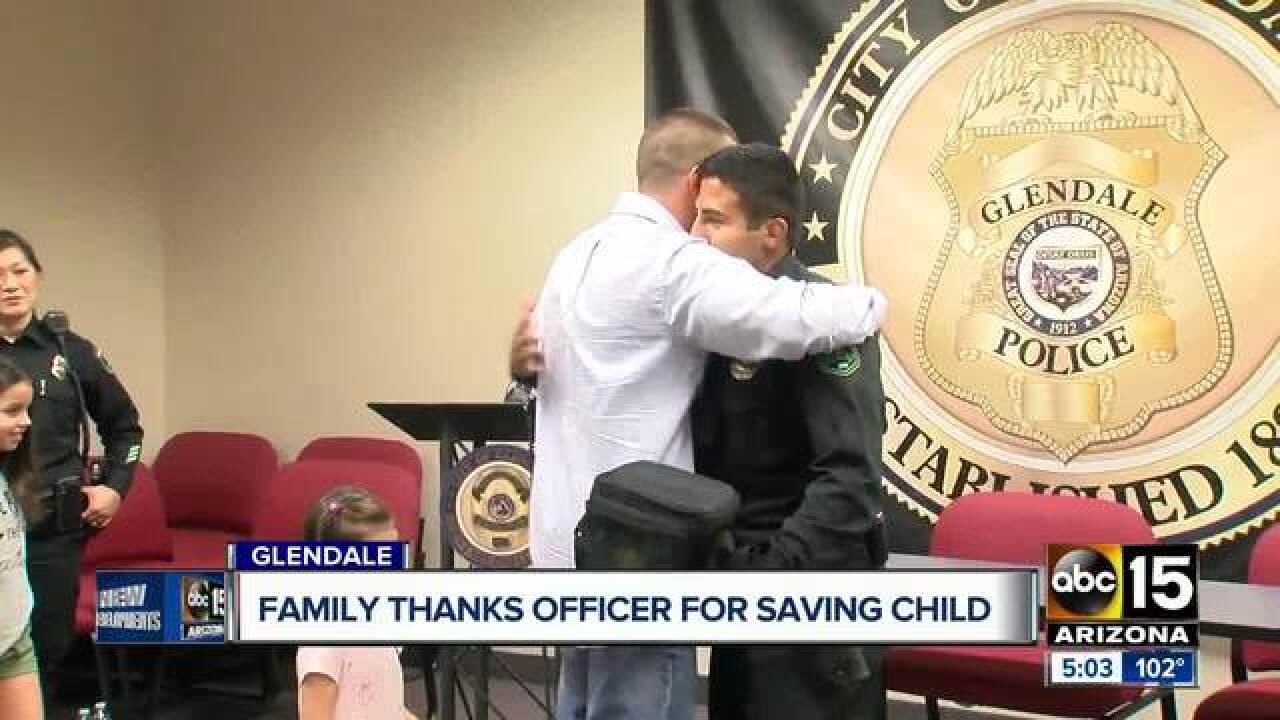 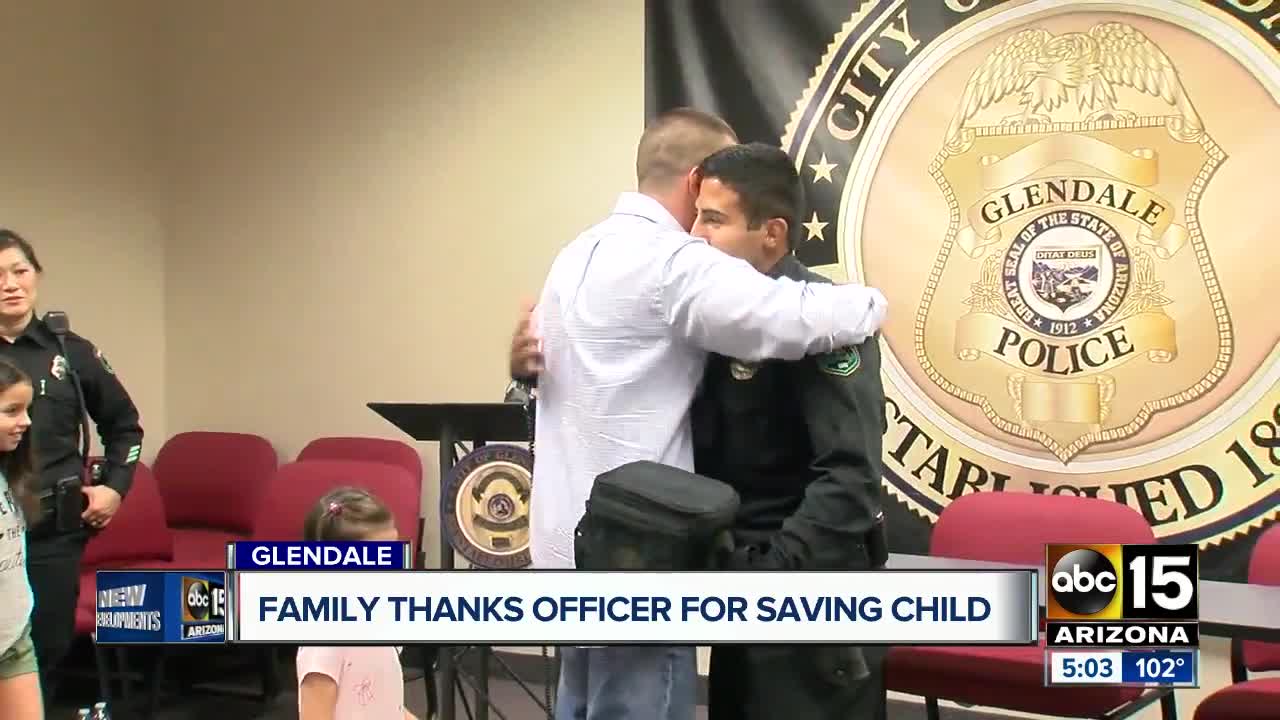 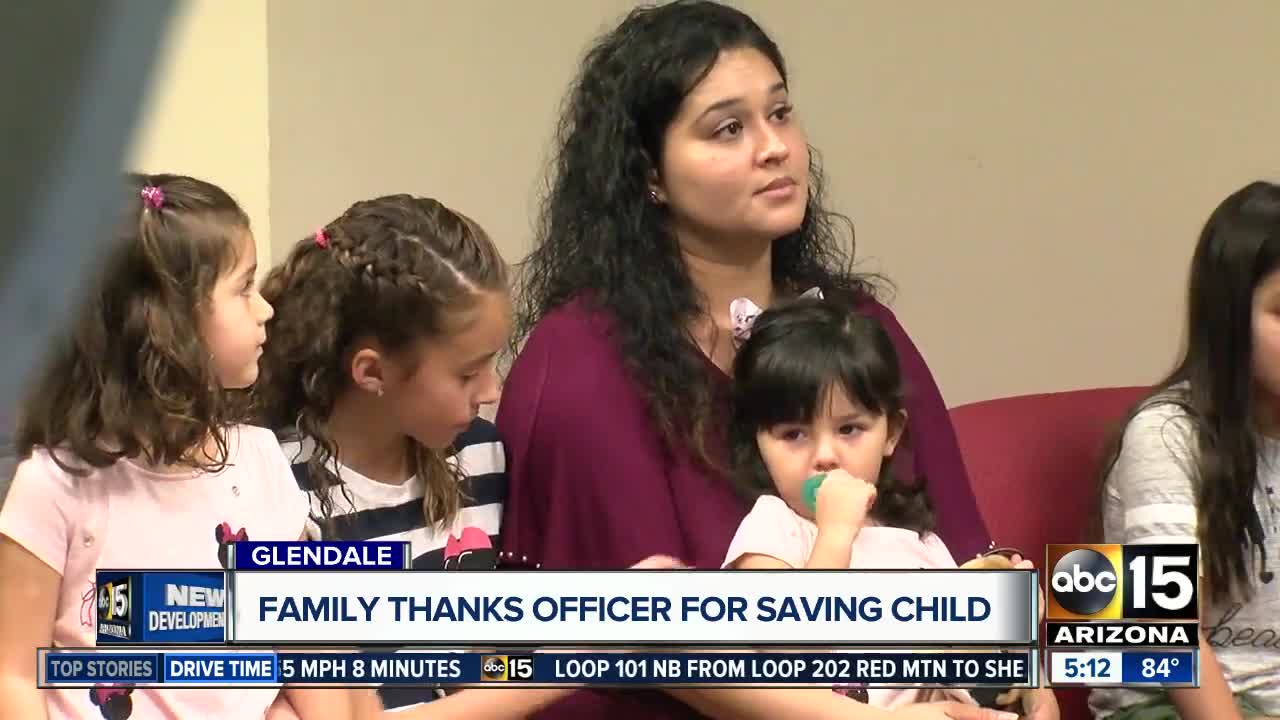 Tears were flowing inside the Glendale police headquarters Tuesday as a 22-year-old officer reunited with the family of a toddler whose life he is credited with saving.

The family was having a backyard barbecue at their home near 59th Avenue and Cactus Road on August 5, when the near tragedy struck . We are told a family friend supervising the pool literally turned their back for a second when their 2-year-old daughter Diana went under.

The toddler's 14-year-old sister Alyssa started CPR, and her father David Holmes took over as soon as he realized what was going on. He then remembered seeing two police cars parked at a home three doors down the street.

Glendale police officers were there on a call to assist one of his neighbors who was in crisis.

Holmes ran to the home with his daughter in his arms and started banging on the door.

Holmes says Officer Jacob Gonzales immediately sprung into action and started infant CPR on his toddler, while the other officer called for help.

"Officer Gonzales, without any hesitation. He just grabbed her and did what he did," said Holmes.

Officer Gonzales said he followed his training. After checking for a pulse, he performed sternum rubs.

In very intense body camera footage released by Glendale police, you can hear the toddler struggling to breathe, then the sound everyone's been waiting for -- crying that indicates the worst may be over.

Medics took over at that point.

The family of Diane said they didn't have the words to express their gratitude to Officer Gonzalez and the whole crew out there to help their family that night.

"On behalf of me and my family, I just want to thank Officer Gonzales. Thank you so much, our daughter is here because of you," said Holmes.

The humble officer said he was just doing his job.

"A lot of officers are trained in first-aid and this department has trained me very well, without that training it would have probably been a different outcome for that toddler."

The Glendale born and raised officer has been on the force for the last year and a half. He said any officer would do what he had done.

The grateful family hopes their experience reminds all parents, it only takes a second for a child to go under. Holmes said they were always extra cautious. He advises all parents to learn CPR and to teach every family member the life-saving skill as well.