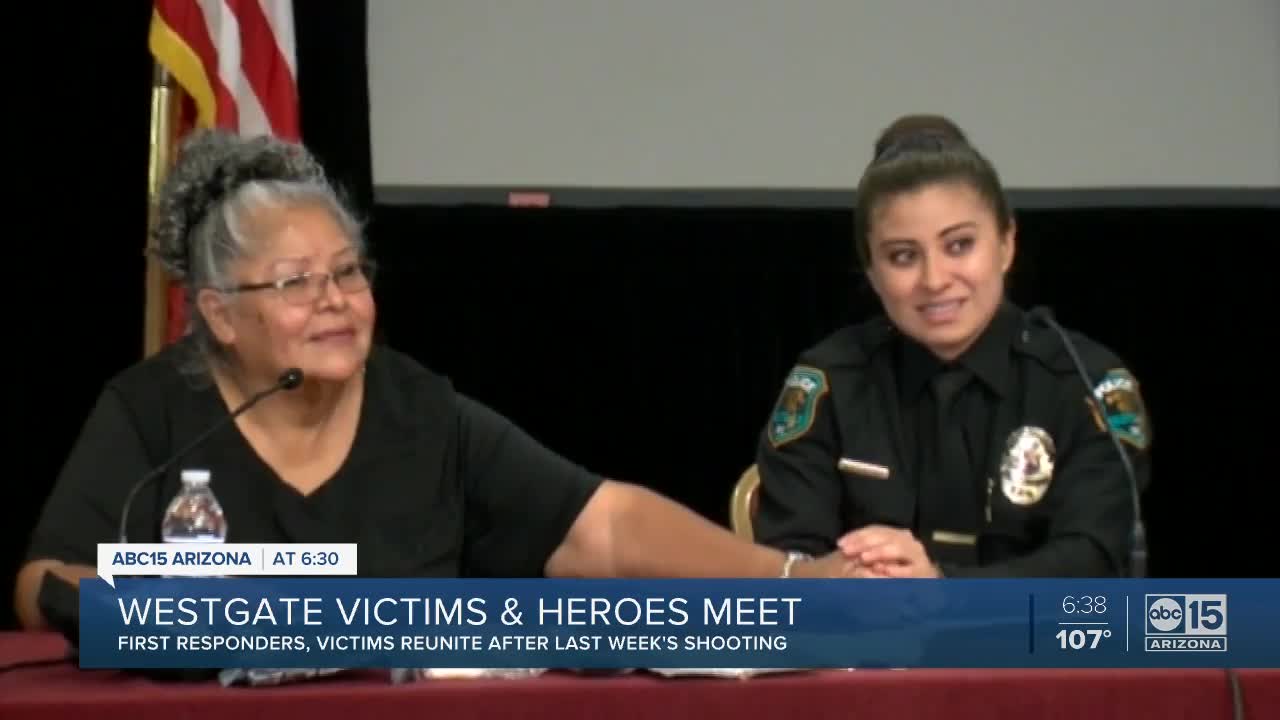 Parents of two teenagers shot during the Westgate shooting met the first responders who helped save their lives.

GLENDALE, AZ — Parents of two teenagers shot during the Westgate shooting met the first responders who helped save their lives.

Alfredo Jaime, 19, was shot in the chest. His best friend whom he was with, Destiny, 16, was shot in the leg by Hernandez. The two were sitting on a bench outside Johnny Rockets when the shooting started.

Thursday, the City of Glendale recognized both Officer Ebersohl and Captain Spire for their heroic actions. Ebersohl was one of the first Glendale Police Officers on the scene, immediately coming to the aide of Jaime and Destiny.

"My job is to protect and serve. It's gotta be a selfless act," said Officer Ebersohl, who also shared a unique moment when treating 16-year-old Destiny. "Destiny looked at me and I said my name's destiny too. She looks at me, stops everything, stops screaming, and says, "With and I or with a Y?'"

Captain Spire was off-duty at the time, eating dinner with his family at Which Wich. After hearing the gunshots, he rushed to help both victims as well.

"Honestly, I didn't think about it. I was just instinctively doing what I was trained to do," said Spire.

Both Captain Spire and Officer Ebersohl met the mothers of Destiny and Alfredo, and with tears in their eyes, thanked both responders for saving their children's lives.

"God will bless you, tenfold. Because you helped, not because you had to, but because it came from deep within your heart," said Kathleen Bain, Destiny's mom.

"I knew that you were their angels that protected them that day, that God sent you," said Maggie Jaime, Alfredo's mom.

Officer Ebersohl and Captain Spire were recognized by Glendale Police Chief Chris Briggs, and they received the "Life Safety Award" by Glendale Fire Chief Terry Garrison and a proclamation from the city by Glendale Mayor Jerry Weiers.