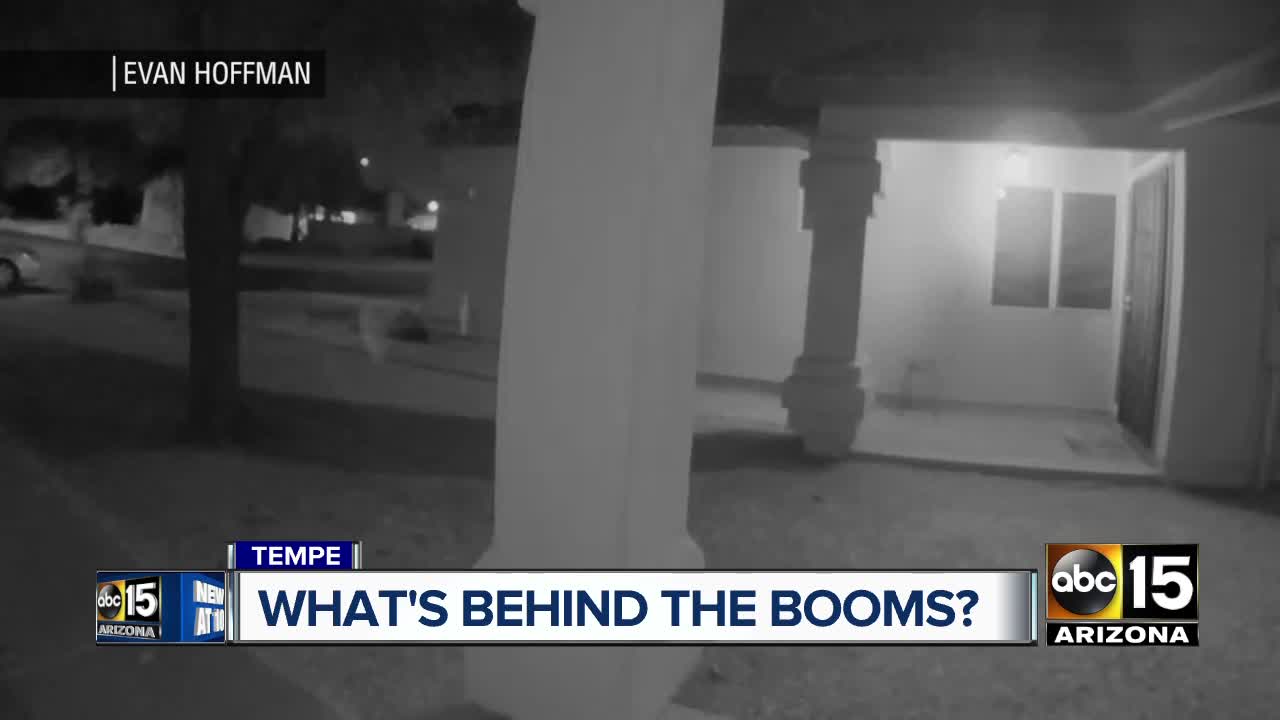 Loud bangs and flashes have been waking up hundreds in south Tempe.

TEMPE, AZ — Loud bangs and flashes have been waking up hundreds in south Tempe.

Neighbors around Grove Parkway and Hardy Drive say they are baffled by the unexplained explosions in the middle of the night.

The strange sounds were even caught on camera multiple times, and are accompanied by bright flashes that light up the night sky.

"It's like a loud explosion, like a bomb," said Sudhir Anand, who claims the explosions have affected his family for months. "It actually wakes my baby up sometimes."

His neighbors have almost all had a similar experience.

"We didn’t really know what it was. I popped up, and I asked my husband, 'Did you hear that?' said Jen Collier. "We both ran to our kid's room to make sure no one flew off the bed or anything.
We saw that they were okay and we went to sleep, and I forgot about it."

Some community members say they have heard the explosions for months, others weeks, and some, for the first time this week.

"I was getting ready for bed, and I did hear a very, very loud bang," said Tiffany Dressler. "I went online to see if I could find anything. It was loud enough to warrant a little scare."

"July 5th was the first time I heard it," said Evan Hoffman, who later checked his Ring doorbell and has captured the mysterious explosions three different times.

The explosions are sporadic and unpredictable, almost always happening in the evening hours.

"Happens like once a week, twice a week sometimes. So there is no set frequency to it," said Anand.

"It's interesting, they are very intermittent," said Dressler.

While everyone is in agreement on the annoyance, they do not all share the same theories.

"It didn't necessarily sound like a gunshot," said Dressler.

"I really don't know what it is. It could be a UFO, hell you don't know, you're sleeping at night," said Anand.

"I thought it was a transformer," said Hoffman.

"We heard about it and did some research, and it doesn’t appear to have anything to do with SRP."

Tempe police say they have received calls and are investigating. They even sent two officers out to the neighborhood to look for shots fired or possible fires from an explosion. They found nothing.

The neighborhood is now hoping the police or public can help them solve the mystery.