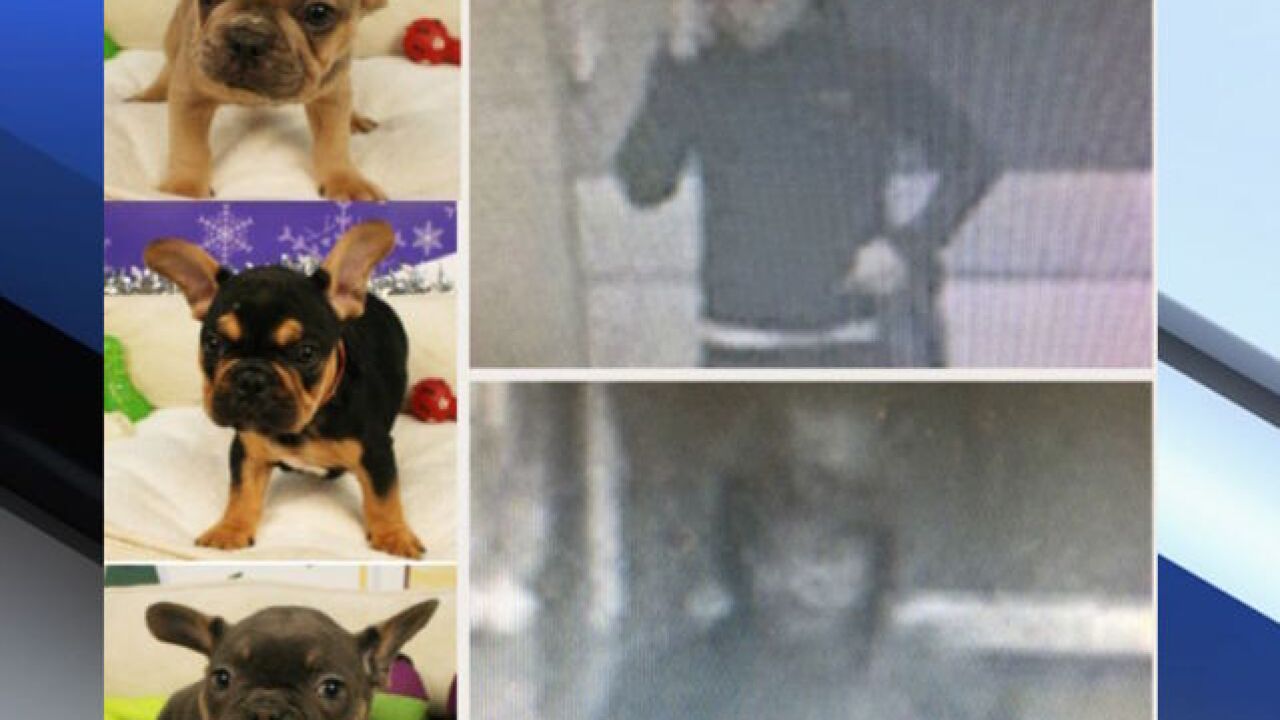 Copyright 2018 Scripps Media, Inc. All rights reserved. This material may not be published, broadcast, rewritten, or redistributed.
Tempe Police

Police are searching for two men who are accused of stealing French bulldog puppies collectively worth $30,000 from a Tempe mall.

According to Tempe police, five French bulldogs were taken from Animal Kingdom at Arizona Mills on Wednesday night. The dogs are each worth $6,000.

The suspects broke into the store through a back door and removed the puppies in a large, gray plastic trash bin with “brute” written on it.

According to Animal Kingdom, three of the five pups stolen were already sold to families and waiting to be brought home.

The Peraza family recently purchased "Gwen" and were eager to take the new puppy home for their daughter's 11th birthday.

"It's not like they stole some random pet at a pet store," Louie Peraza said. "They took our dog."

"The fact that they were only in here for one minute...they knew exactly what they were going for," Nofer explained. "That's a very expensive breed."

Theresa and Chris Kriaris say they were waiting to bring their puppy, "Goat," home.

"I mean, it felt like he was already part of the family," Theresa said.

Goat was slated to go to his forever home next week after finishing his last bit of medication. However, now his family worries his infection will get worse.

"There's two out of the five of them that are sick and need veterinarian attention," Chris said.

The families say now all they can do is wait and hope the thieves do the right thing and return the dogs.

One of the suspects is described as being Hispanic or Caucasian, medium height and a thin build. He may have been pigeon-toed. He was wearing a black hoodie, white undershirt, black pants and a maroon beanie at the time of the incident, however, after the burglary, he changed into a dark-green hat and was seen carrying a side bag, a phone with a red case and white gloves.

The second suspect is described as being medium height, with a stocky build and a thin beard. He was wearing a black North Face jacket and camouflage pants.

Animal Kingdom says all the dogs have been microchipped and flagged and stolen. If someone were to run one of the chips, they would be alerted that they're in possession of a stolen dog.

Anyone with information about the incident or the suspects’ whereabouts is urged to call 480-350-8311.