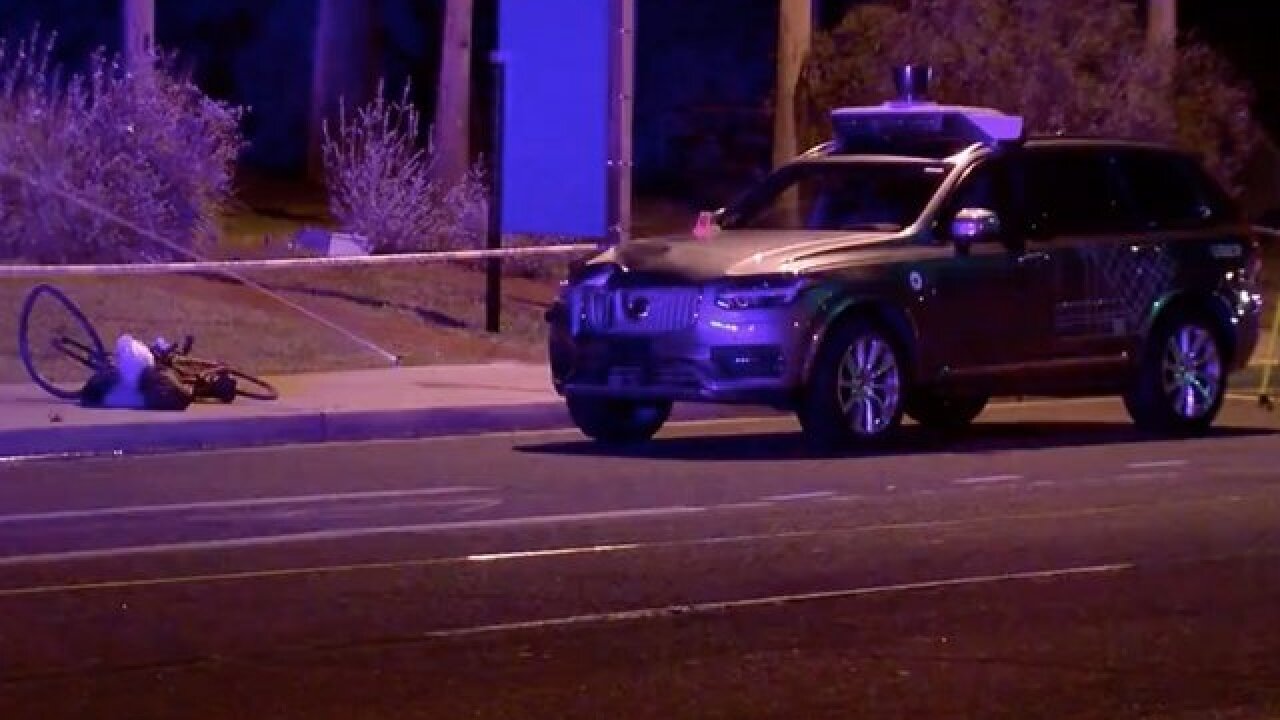 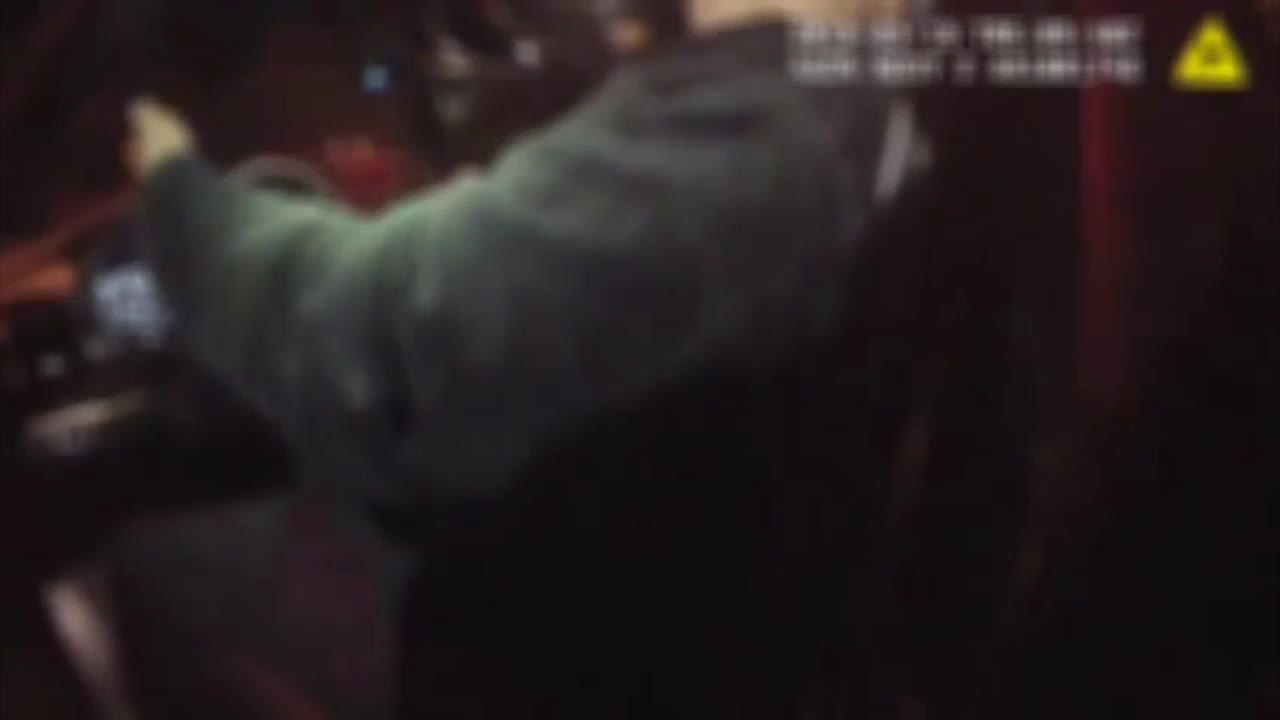 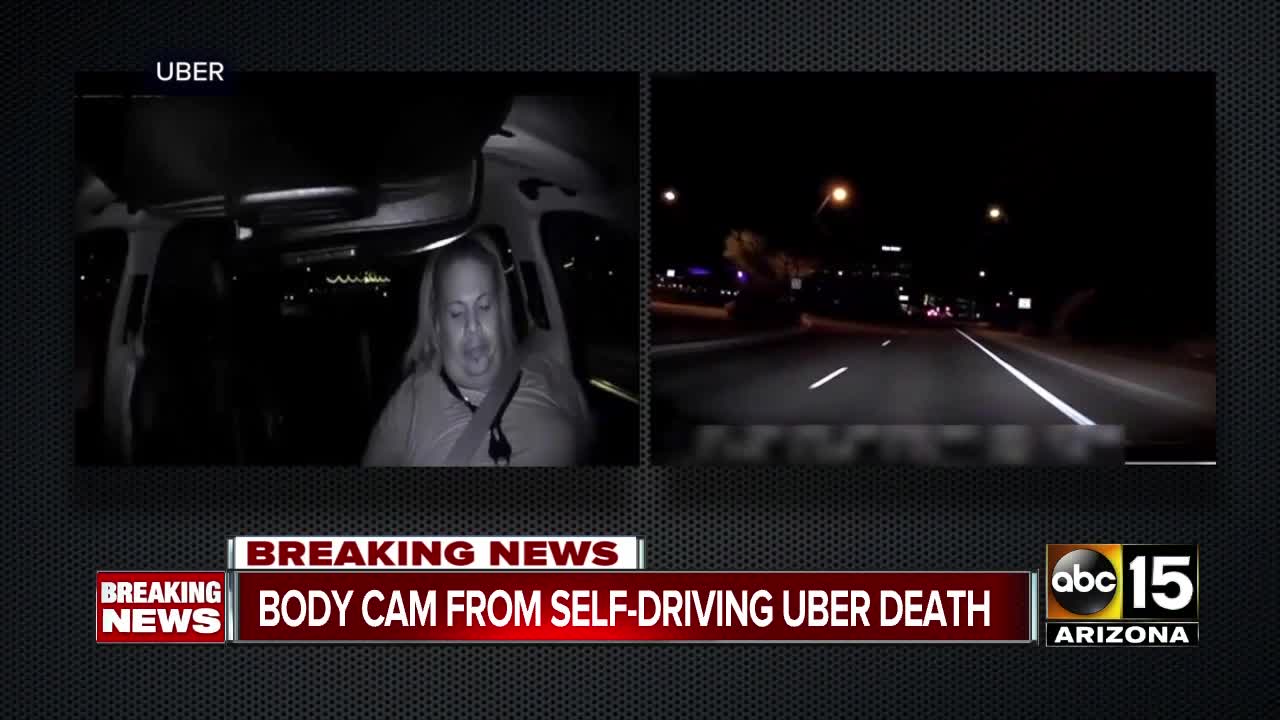 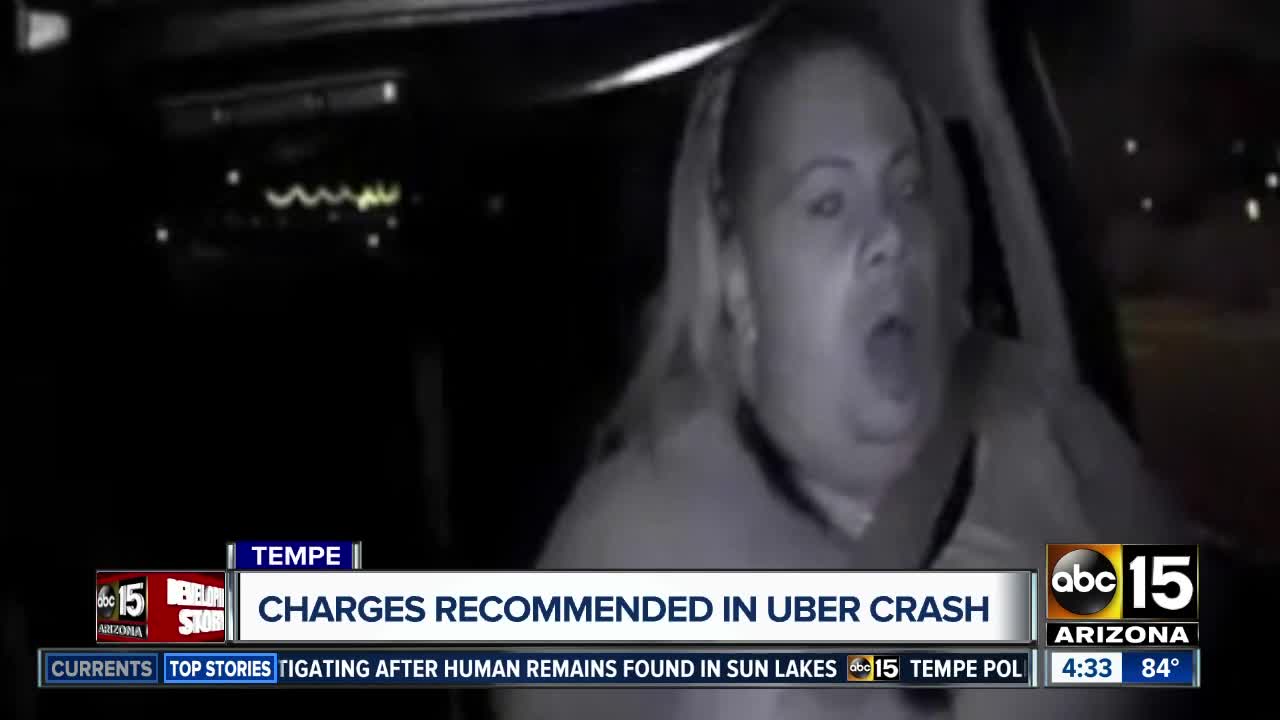 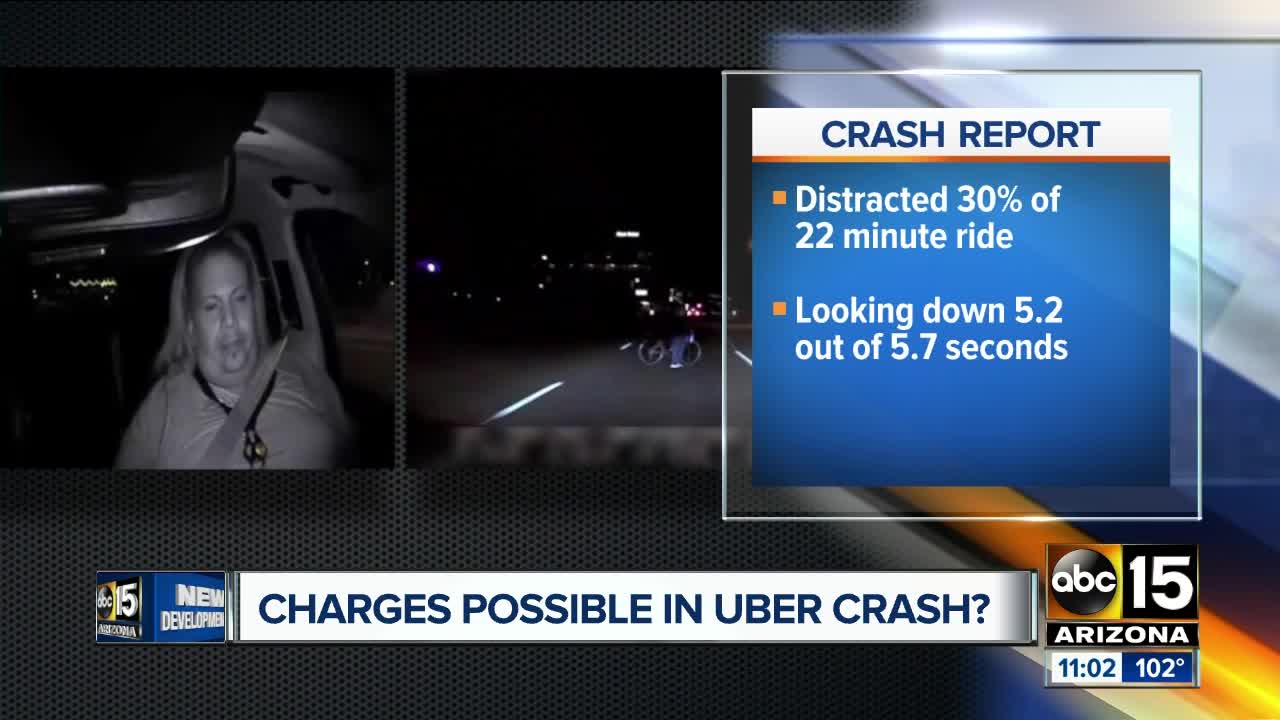 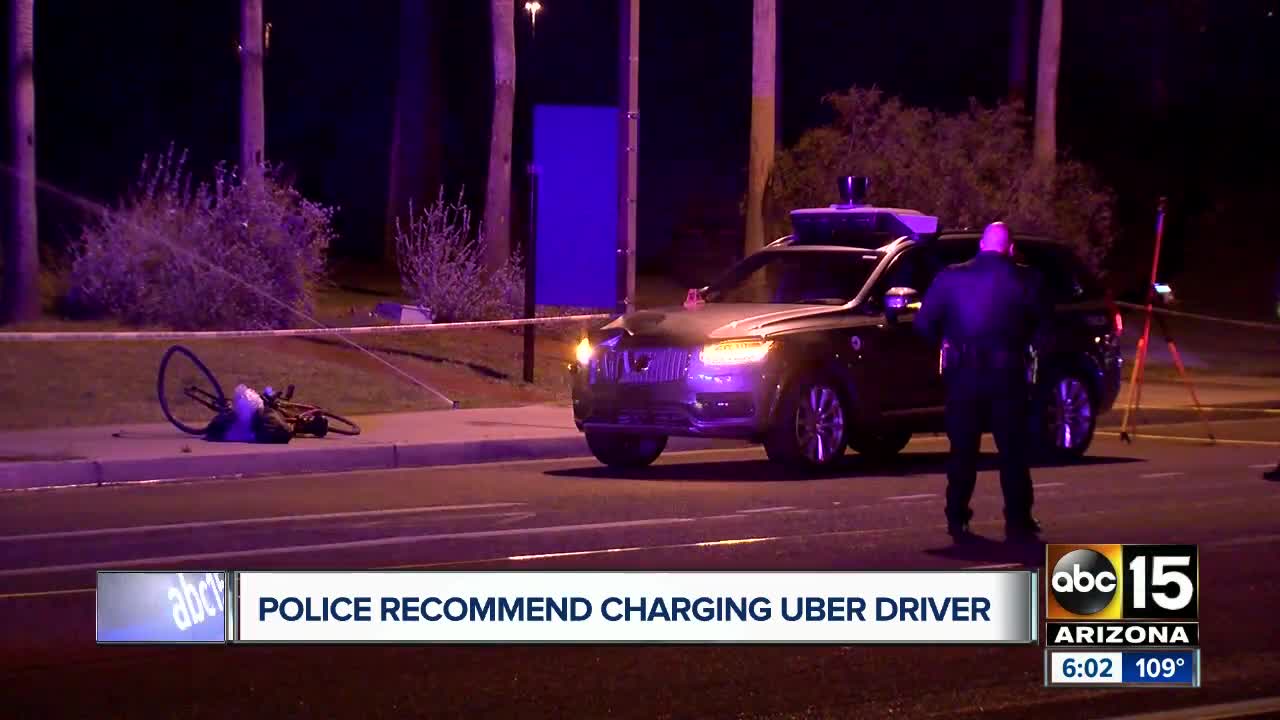 Tempe Police have released new body camera video and the police report from the night of March 19, when a self-driving Uber hit and killed a pedestrian mid-block on Mill Avenue. The backup driver was streaming the TV show "The Voice" before fatally striking the pedestrian, the police report said.

The case has now been handed over to the Yavapai County Attorney for review of possible charges against the backup driver, Rafaela Vasquez. The Maricopa County Attorney's Office was originally given the case, but handed it over to Yavapai because of a "conflict of interest."

Vasquez was still in the driver's seat of the Uber when she was questioned by officers.

"Are you alright?" an officer asked.

Vasquez is seen giving the officers her license and insurance and asked about the victim.

"Is the person OK?" Vasquez asked.

The pedestrian, Elaine Herzberg, was killed in the collision. New pictures show her bike left behind and a big dent on the right front end of the Uber.

"So what exactly happened?" an officer asked.

In a separate video released by Uber in March, Vasquez is seen looking down for a few seconds at a time. But it's unclear if it has something to do with the program.

According to a police report, investigators noted Vazquez looking down and to her right side multiple times. Before the collision occurred, Vasquez's eyes were averted from the roadway for approximately 5.3 seconds.

"Sometimes, her face appears to react and show a smirk or laugh at various points during the times that she is looking down," the report said. "Her hands are not visible in the frame of the video during these times."

Officers calculated that had Vasquez been paying attention, she could have reacted 143 feet before impact and brought the SUV to a stop about 42.6 feet before hitting Herzberg.

"This crash would not have occurred if Vasquez would have been monitoring the vehicle and roadway conditions and was not distracted," the report stated.

After the crash, Vasquez was given a field sobriety test.

"Your internal clock is a little slow, but not anything alarming," the officer is heard saying.

"I'm sick over what happened," Vasquez told the officer.

The Tempe police report says Vasquez had a “disregard for assigned job function to intervene in a hazardous situation” and the crash may have been avoided if she was watching the road.

She told officers she "slammed" on the brakes immediately after hitting the woman but Herzberg "came out of nowhere and she didn't see her," the police report said.

In the police report, the investigator explained there were no skid marks or antilock brake marks from the autonomous vehicle that would have indicated "dynamic braking" prior to the crash.

The report also says Herzberg unlawfully crossing the road at an unmarked location was a factor in the crash.

After the crash occurred, officers attempted to locate Vasquez at her Phoenix home but were unsuccessful. She was later found in Tucson and her personal and work cell phones were seized as evidence.

As part of the investigation, Tempe police reached out to YouTube, Netflix and Hulu for the video viewing history of both cell phones. Netflix was the first to respond, saying there was no activity during the specified time period on either phones.

On May 31, Hulu responded saying the most accurate way to measure playback times is to look at player "heartbeats."

It was discovered based on Hulu's heartbeat data that a user on Vasquez's account was watching an episode of "The Voice" during the time of the collision. However, the heartbeats were not consistent, meaning the user may have paused the player, switched apps, experienced buffering issues or lost service.

Uber has since shut down their self-driving program in the Valley. The victim's family reached a settlement with Uber.

The detective seeking the warrant, identified as J. Barutha, wrote that based on information from the vehicular homicide unit, "it is believed that the crime of vehicular manslaughter has occurred and that evidence of this offense is currently located in a 2017 Grey Volvo XC-90."

The National Transportation Safety Board, in a preliminary report issued last month, said the autonomous driving system on Uber's Volvo XC-90 SUV spotted Herzberg about six seconds before hitting her, but did not stop because the system used to automatically apply brakes in potentially dangerous situations had been disabled.

RELATED: Uber announces more security for riders, including ability to dial 911 from the app

The system is disabled while Uber's cars are under computer control, "to reduce the potential for erratic vehicle behavior," the NTSB report said. Instead of the system, Uber relies on the human backup driver to intervene, the report stated. But the system is not designed to alert the driver.

An Uber spokeswoman said in a prepared statement Friday morning that any use of a mobile device by a backup driver while a vehicle is moving is a fireable offense. "This is emphasized during training and on an ongoing basis," the statement said.

The Yavapai County Attorney does not have a projected time line for a decision in the case.

After the crash, the ride-hailing company said it did a top-to-bottom safety evaluation, reviewing internal processes and safety culture. Uber also said it brought in former transportation safety board chairman Christopher Hart to advise the company on safety.