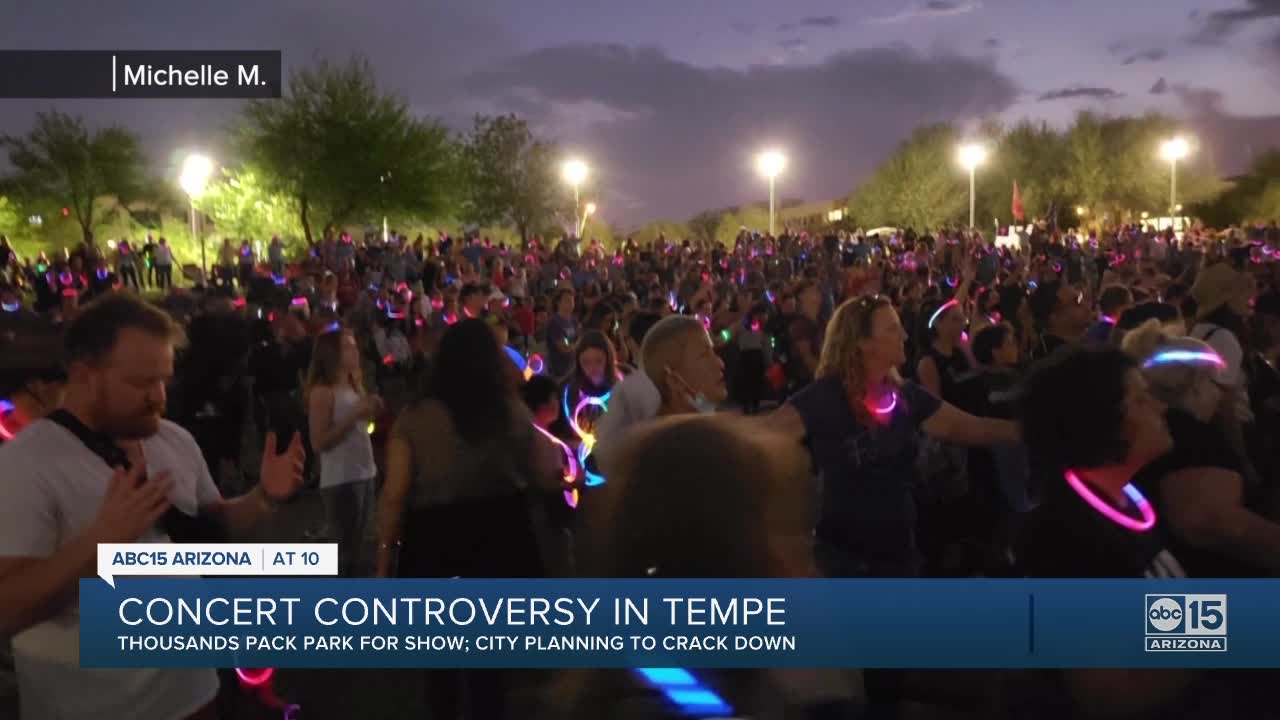 A large Christian concert is causing a lot of controversy. Thousands of people congregated at Tempe Beach Park, almost all without masks, for a worship ceremony on November 1. It was organized by a popular conservative Christian musician and preacher Sean Feucht.

TEMPE, AZ — A large Christian concert is causing a lot of controversy. Thousands of people congregated at Tempe Beach Park, almost all without masks, for a worship ceremony on November 1. It was organized by a popular conservative Christian musician and preacher Sean Feucht.

The City of Tempe is now looking to crack down on the flouting of the rules. In a statement, the city said, "Event organizers did not request or receive city permission to hold the event. The City of Tempe will cite them and pursue cost recovery for city services rendered."

The gathering itself, in the time of COVID, has led to strong opinions on both sides.

"It was really this just peaceful sort of thing," said Michelle Myers.

Myers drove from Buckeye to attend the concert.

"I took seven children total and my mother," she said. "it was an amazing event. It taught them a lot about standing up for themselves and what they believe."

Myers, who told ABC15 she has an autoimmune disease, said she weighed the risks of COVID-19 but ultimately decided it was worth attending.

"I felt that the cause that we were out there for, greatly outweighed the effect it could possibly have on me," she said. "For me, it wasn’t just about anti-mask. For me, it was about pro being allowed to worship freely when and where I want to, with however many people."

"We understand freedom of religion but there is an area of gray," said Tim Case, who lived in Tempe for years. "It could lead to hundreds of cases. We are seeing spikes every day."

The city of Tempe acknowledged that the worship event is "defined as essential by the State of Arizona and are protected by the U.S. Constitution. However, the Governor’s Executive Orders prohibit gatherings of 50 or more without approval by a city or town during this COVID-19 pandemic."

City leaders said they "repeatedly but unsuccessfully attempted to contact and get cooperation from the primary event coordinator." They also noted that in other cities, Feucht would hold concerts "without the required permits."

"It's basically what I see as a slap in the face," said Case.

City leaders say they plan to issue citations to recoup the money for clean-up and the police presence. The total cost is still being calculated.

"That's the right thing to do," said Case. "If any other laws broken, there are consequences for it, whether you believe the laws right or not."

Myers believes the levying of fines in this case, is inconsistent with how local governments have handled large gatherings, rallies and protests around other issues, like police protests and political protests or celebrations.

"We can have a President-Elect happen and everybody will be in the streets, and nobody stopped me from being in the streets that day," said Myers. "But if I go out there for worship they say, 'No, no, no, I need to fine you to recoup my money."

Tim Case said it is not apples to apples and in other cases, the people are wearing masks, distancing, and not intentionally going against city rules.

"It's affecting the local businesses, citizens, everybody in the state right now. You got to take it more serious," he said.

Feucht concerts have violated COVID ordinances in cities all over the country.

"He's been doing this for a couple of months," said Myers.

The valley will know within weeks if the worship event contributes to Arizona's already rising cases.

"He's trying to spread his message and that's OK. But what he's potentially spreading as worse," said Case.

Governor Ducey's office told ABC15 they could not speak to specific events but pointed back to the Executive Order in their emailed statement, writing:
"Nothing in this order shall inhibit a person from engaging in constitutionally protected activities such as speech and religion, and any legal or court process provided that such is conducted in a manner that provides appropriate physical distancing to the extent feasible."

ABC15 reached out to Feucht on social media and via email but we have not heard back.