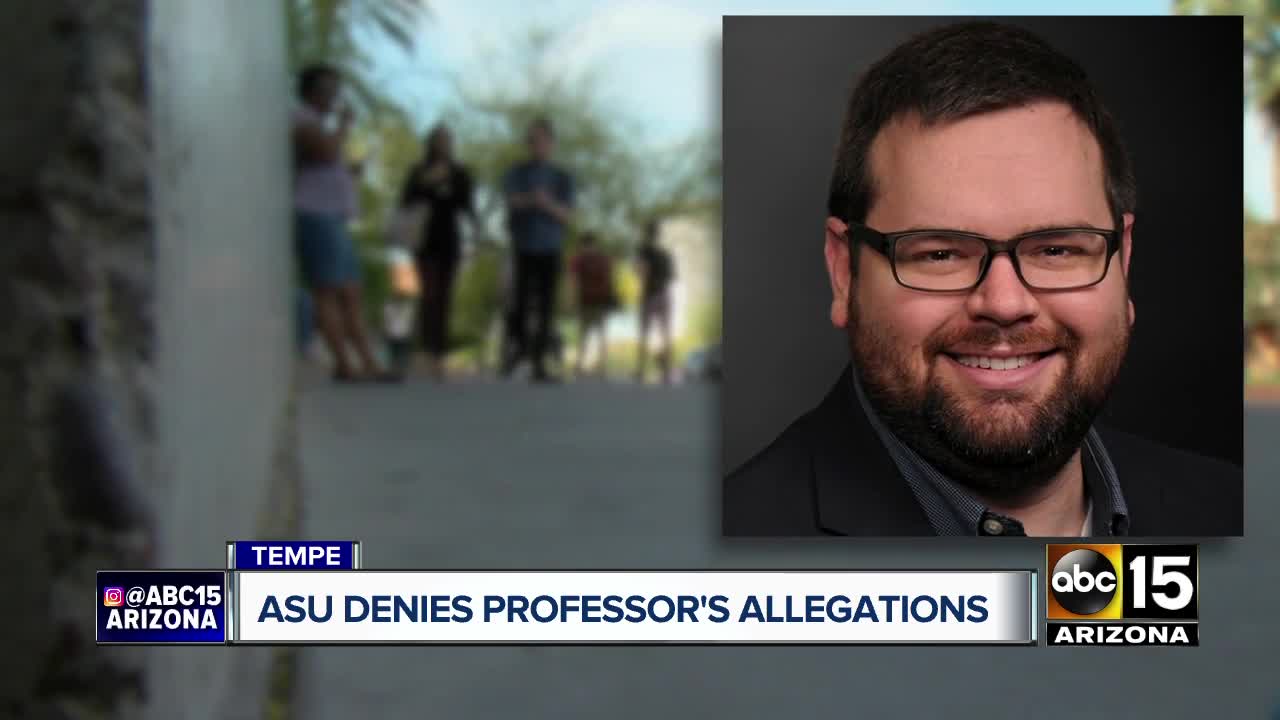 Arizona State University has responded to allegations made by an economics professor regarding unethical practices.

TEMPE, AZ — Arizona State University is strongly denying allegations of price gouging students for grant money and intentionally failing a large percentage of economics students. The accusations came from a professor whose contract is not being renewed at the end of the school year.

Thursday morning Professor Brian Goegan sent an email to hundreds of current and former students. In it, he alleges corruption and a grade-fixing scheme. He said his pushback of the practices are the reason he is being let go from his teaching position.

Instantly, the email spread across campus and beyond.

"It's exploding on Instagram, Snapchat," said one senior at ASU.

"When I saw it this morning it had about a thousand retweets," said one student. "Even in class, people are gossiping about it.”

The first accusation from Goegan is that students are forced to pay for an online service to turn in their homework so that the university could get money from the company.

“In order to convince Cengage to give the Provost a large monetary grant, the department agreed to require all ECN 211 and 212 students use MindTap - a Cengage product. This deal requires students to pay just to turn in their homework,” wrote Goegan in his email.

“Students are being saddled with unnecessary costs so the Provost can fund a pet project,” he continued.

The second allegation was that certain economics professors “were required to prevent at least 30 percent of students from passing the class” so that the Provost could appear to make improvements in the future.

Some students immediately latched onto the allegations.

"What does a professor gain from having to lie about something like this," said Mitchell Glauner, a senior.

The university though vehemently denied the professor's claims.

In an email, to the media and students, the Provost said there is "no factual evidence to support them."

"The accusation that the university would establish quotas in any course requiring to fail a certain percentage of students is unequivocally false. That is not who we are,” wrote Mark Searle, ASU’s Executive Vice President and University Provost.

As Goegan's students grapple with the news, many are defending their former teacher online and on campus.

"I think he was a really great teacher who cared about his students," said Skylar Robinson, a junior who took two courses with Goegan.

"I did not view him as a bad professor at all. And even students who failed his class have said that he was one of the best professors they ever had," said Kara Lehmann, a former student of Goegans.

The provost said in his statement that the university does not usually comment on a faculty disciplinary matter but wrote, "There are many reasons that a faculty member’s contract might not be renewed, including when a faculty member resists course-correction of multiple shortcomings despite supervisory intervention."

ABC15 called, emailed, Facebook messaged, and even went to Professor Goegan’s office but he did not respond and could not be reached for comment.

Below is the full statement from ASU:

I am writing to address misinformation spreading online and through the news media about the use of the Cengage MindTap adaptive learning platform in some of our economics courses.

The misinformation claims that students are required to pay for use of the platform to turn in homework, that Cengage gave ASU a grant for using the program, that a requirement exists to prevent at least 30 percent of students from passing the class, and that a professor was dismissed after expressing disapproval of the platform.

We have looked into these claims and have found no factual evidence to support them.

As with all of ASU's adaptive learning courses up to this point and many other classes, there has been a course fee associated with using the adaptive platform. There is a fee to use MindTap, but it also pays for the class (digital) textbook. The economics courses using MindTap are optional at this time; students may choose to take the same courses taught by other professors using traditional university grading/textbook platforms. Cengage has not given ASU any grants. The accusation that the university would establish quotas in any course requiring to fail a certain percentage of students is unequivocally false. That is not who we are. We generally do not comment on the details of disciplinary matters related to faculty, and there are many reasons that a faculty member's contract might not be renewed, including when a faculty member resists course-correction of multiple shortcomings despite supervisory intervention.

We regret if the spread of this misinformation online has caused confusion on these matters. If you have any questions or feedback, do not hesitate to contact me.

Here is the entire letter from Professor Goegan:

For the past few years the Economics Department has been enforcing two policies I believe to be unethical, and I feel obligated to disclose them to you.

In order to convince Cengage to give the Provost a large monetary grant, the department agreed to require all ECN 211 and 212 students use MindTap - a Cengage product. This deal requires students to pay just to turn in their homework. Instructors who were making assignments available on Blackboard/Canvas have been forced to move those same assignments behind the MindTap paywall to ensure students must pay Cengage to pass the class. Students are being saddled with unnecessary costs so the Provost can fund a pet project.

The second policy was put in place to ensure that the Provost's project was made to look good. All ECN 211, 212, and 221 courses were required to prevent at least 30% of students from passing the class. We were told that we needed to set a baseline against which the Provost's project could be compared. For many instructors, this meant setting students up to fail so it could seem like the Provost swooped in and fixed a problem that doesn't exist.

I found both of these policies to be highly unethical and said so to Dean Hillman. In response, the economics department has decided to let me go. I am hoping all of you can continue the fight against this corruption. I hope you will do two things:
Send an email to President Crow and Dean Hillman asking them to take action to end these policies and to ensure that this does not happen again. Their email addresses are amy.hillman@asu.edu and michael.crow@asu.edu. You can send a pre-filled email with this link: Send an Email.
Forward this email to other students who are not majoring in economics, but who have taken or are taking these courses. You can also send them to this website copy of the email.
It may not seem like much, but I promise you that if you send an email now it will spur real action on this issue.