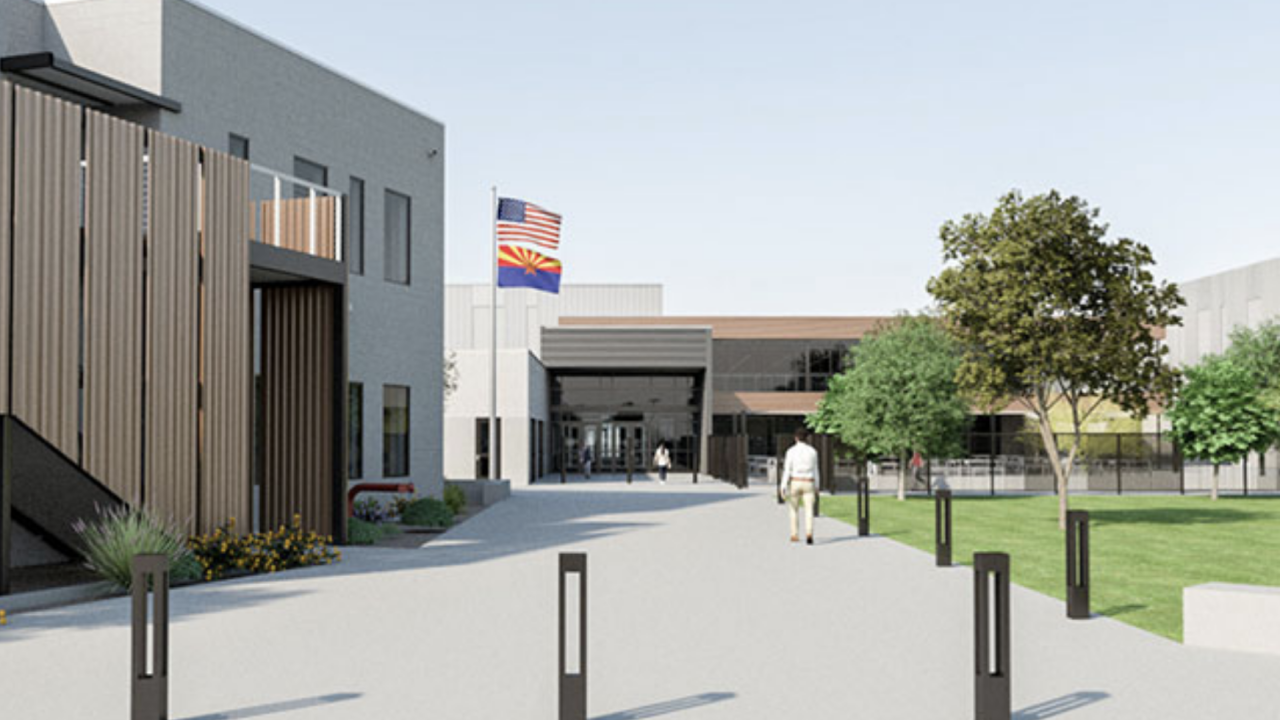 MESA — A Valley construction project is using virtual reality goggles as a way to show off its vision to the community.

Eastmark High School is one of their first "digital" construction projects, and school officials tell us the new technology not only helps save paper, but also has a huge potential for saving tens of thousands of dollars of taxpayer money.

The high school, which is part of Queen Creek Unified School District, is located in the brand new Eastmark community sprouting up in Mesa, near the border of Queen Creek.

Right now, all you see is a big dirt lot, construction cranes, hard hats, and the skeletal frame of a building. But use your smartphone and put on the virtual reality goggles, and you'll see the whole project come to life in 3-D.

Thanks to 14 sign posts with QR codes scattered throughout the land, Cole Woodward, a project manager for CORE Construction, said the technology lets them show stakeholders what the school will look like. Woodward said they have given tours to school district officials, parents, teachers, and students.

The school district is sharing the renderings in conjunction with their architect partner Orcutt-Winslow, which created the project. You can view them on their website http://eastmarkhs.com/

Instead of staring at blue prints on paper, stakeholders are now able to get a complete feel of the architect's vision, and they're able to recommend changes before the beams are put into the ground.

That fact alone is a potential money saver for the school district. Instead of having to remodel or rip out walls and make changes later, those changes could be made during the construction process.

This means projects stay on time and under budget, said Woodard. He called it the future of construction, in big part due to efficiency throughout the whole process.

Jim Lamb, the director of bond projects and construction at the Queen Creek School District, said the best part about this technology was knowing what he was going to get before the shovels hit the dirt.

"A lot of time if we don't see it in the blueprint, we would have to wait until it was installed and go 'no, that is not what we like. Can we move it?' Then the contractor would have to re-do the work, move something. It adds a lot of cost and time to the project," he said.

He added that the really important part for them, was to have the school ready for students on day one. The last thing they wanted to do was close down classrooms because the layout didn't fit the needs of the teachers. A lot of the design was hard to detect on blue prints, said Lamb.

Core Construction officials said it was hard to put a dollar figure on the actual amount of money the district would save, as it would all depend on projected changes they would have had to make, but they estimate it to be at least tens of thousands of dollars.

Eastmark high school will be a 60-acre campus that is set to open in July. The school is a career-path academy designed to ensure students are college and career ready.