Arizona Republican Sen. Jeff Flake said his own party could be "toast" while attending a Friday town hall event in Mesa.

Flake was hosting the event at aerospace company GECO, fielding questions from employees about the tax reform bill currently in Congress.

On Sunday afternoon, President Trump took to Twitter to respond to Flake's comments: 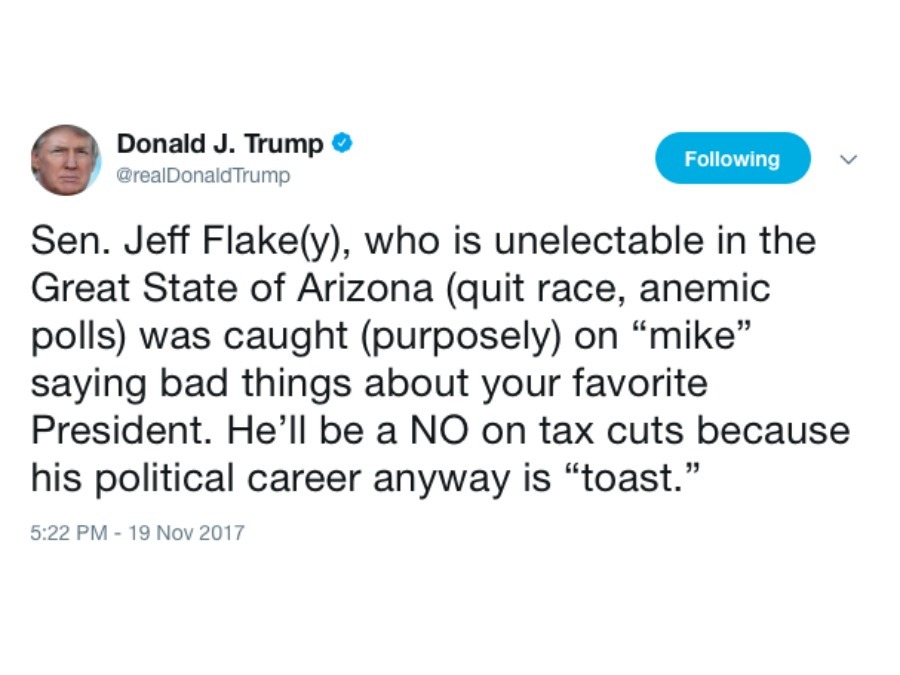 During the town hall on Friday, Flake a took question from Mesa Mayor John Giles about possibly running for president in 2020 against Donald Trump. After the hour-long discussion ended, Flake stepped off the stage and into the audience. That's when Giles walked up to the senator. Flake was still wearing a microphone on his lapel, and while sound to the speakers had been muted, the audio feed continued to ABC15 Arizona cameras at the back of the room.

"...[if we] become the party of Roy Moore and Donald Trump, we are toast," Flake said.

ABC15's camera began to roll mid-sentence, and Flake's office told us the senator used the word "if we" before our cameras started.

The video does not prove this either way, but the original version of this story did not include Flake's recollection.

"And I am not throwing smoke at you, but you are the guy," Giles responded. "Just for fun, think about how much fun it would be, just to be the foil, you know, and point out what an idiot this guy [Trump] is."

Moments later, a man walked over to Flake and pointed to the microphone, clearly catching the senator by surprise.

Giles didn't mention Trump by name, but he was apparently remarking about the president. Giles' office did not dispute the intent of the comment when specifically asked by ABC15.

Giles, a Republican, was elected as Mesa's mayor in August 2014 and was re-elected two years later.

ABC15 reached out to the offices of both Flake and Giles for comment before publishing this story. Sen. Flake's office said they had nothing additional to add, but later tweeted, "No news here. I've been saying this to anyone who will listen."

Flake has publicly sparred with President Trump in the past, and in a blistering speech on the Senate floor last month, he announced he would not be running for re-election.

Mayor Giles released the following statement, addressing only the comments about Moore.

“As a life-long conservative Republican, I am troubled when candidates like Roy Moore send the wrong message about my party’s ethics and policies. We need more people like Jeff Flake in the US Senate, not Roy Moore.”

Pollster Mike Noble with OH Predictive Insights says the conversation shows how alarmed some Republicans are at the state of their own party.

"You could tell there is smoke rising from the GOP, now whether or not they are sounding the fire alarms remains to be seen," said Noble.

.@JeffFlake's candidness further exposes the toxic civil war within the @AZGOP. This intraparty battle has created an ineffective, partisan discord that has Arizonans fed up with Washington. #AZSen https://t.co/vkVTx6TNoe