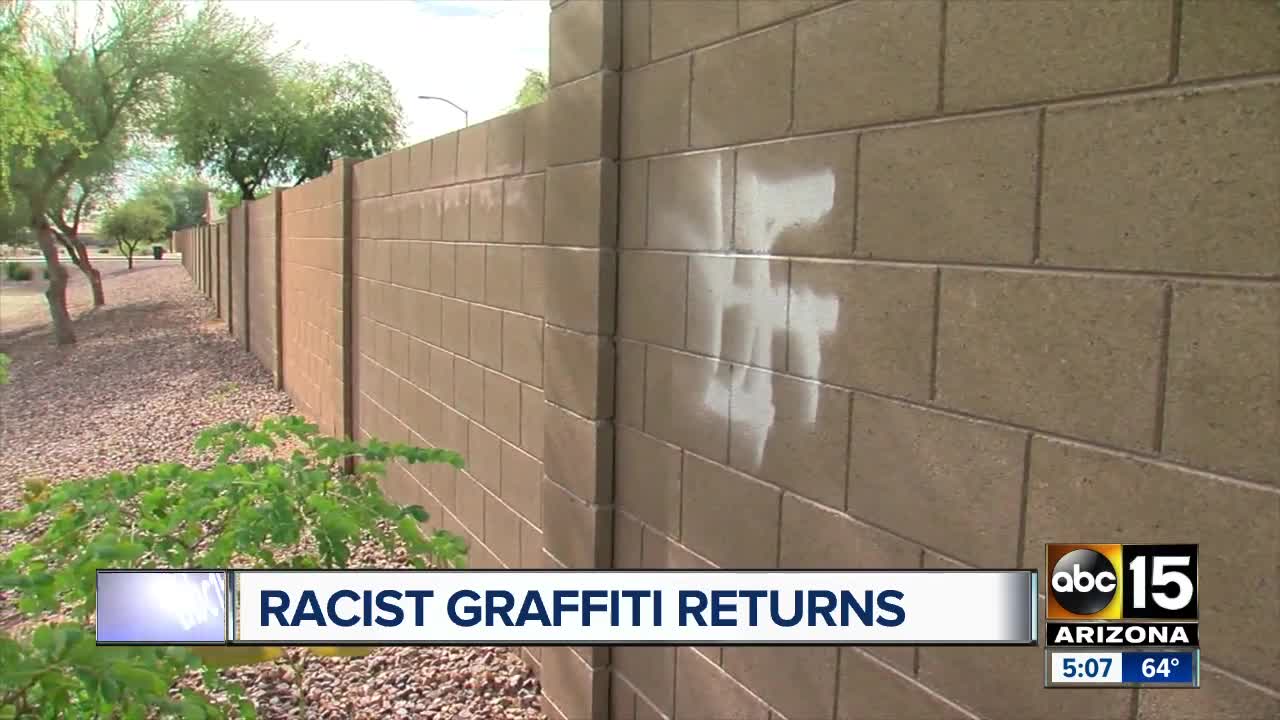 MESA, AZ — It's been a busy week for a quiet community in Mesa as they deal with two instances of racist and obscene graffiti over the weekend.

First noticed on Friday, a neighbor posted photos on Facebook of obscene images and racist words and symbols painted on walls in the Meridian Hills neighborhood.

A swastika, among other images, were quickly drawn over by community members and painted over by the home owner's association.

"It was upsetting," said Jeff Dunn, whose outside wall the graffiti was originally painted on. "I was more concerned that we were being targeted as racist because of the swastikas and words that were on there."

Neighbors who thought it would a one-time vandalizing were surprised to find another swastika, male genitalia and an obscene phrase painted on a nearby wall. Although no personal damage had been done with the wall graffiti, one neighbor found that his car had been victimized by the graffiti.

"My neighbor noticed it Friday afternoon," said Chuck Ramsey, the driver's side door of his red pick-up truck painted with silver paint. Ramsey estimates it will cost him between $500 and $1,000 to fix. "I detest it. I think whoever did it needs to have some counseling."

Many neighbors filed police reports, and the Mesa Police Department is aware of the situation.

Recently, a swastika was painted on a light post outside an Orthodox Jew-run business in Phoenix.

"My first reaction was one of disgust," said Carlos Galindo-Elvira, Region Director of the Anti-Defamation League in Arizona. "We are speaking out against this type of hate symbol, and reminding people that a swastika is a hate symbol, and is not normal."

AAM, LLC, the homeowner's association that manages the property, has already had the new graffiti painted over.