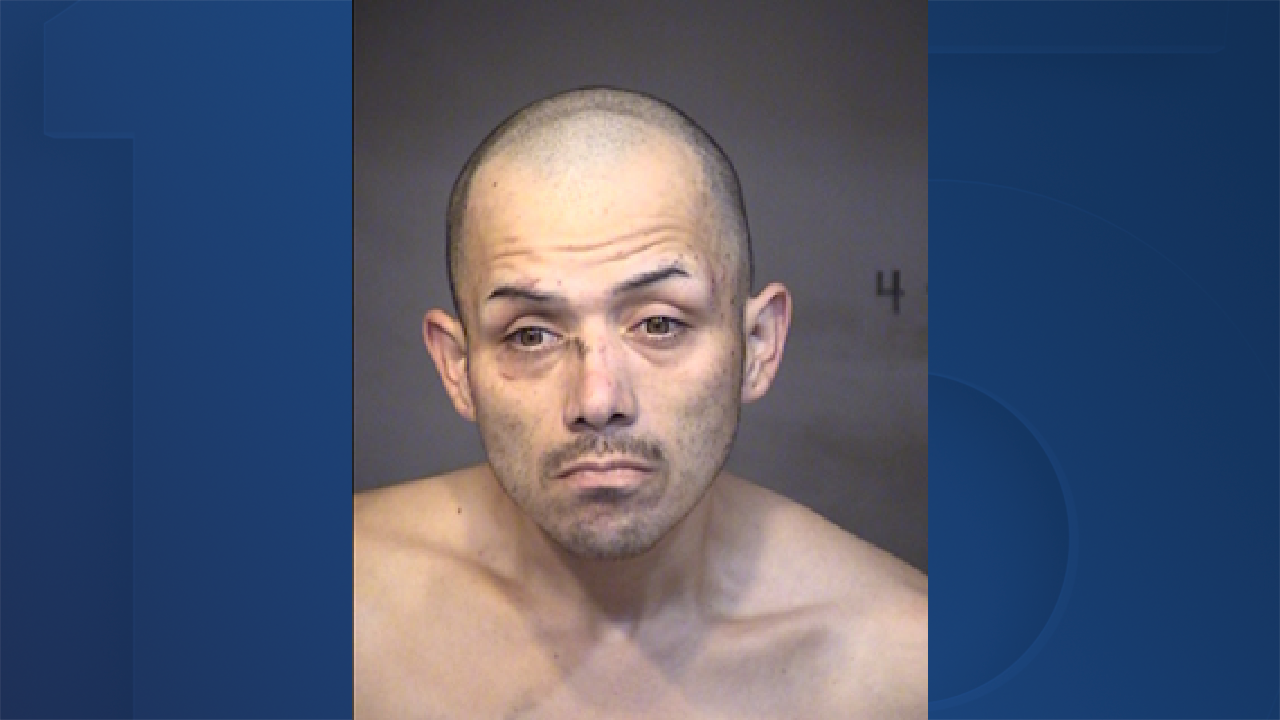 MESA, AZ — Police say a 34-year-old man is facing 19 felony charges after he apparently went on a four-day crime spree in Mesa and Chandler.

Officers say at least 12 rounds were fired at the victims, who were seated in their vehicle. Both suffered minor injuries and police say neither victim knew why they were fired upon or what might have motivated the suspect. Witnesses described the shooter as a short, stocky Hispanic male wearing a blue LA Dodgers baseball cap and fleeing in a black Cadillac Escalade.

While taking the stolen vehicle report, police were approached by three more victims. They said they were working on a Ford Escape in the parking lot that would not start, when Reyes approached them and tried to rob them at gunpoint, but when told the car wouldn't start, he walked away and stole the Mercedes.

At 8:11 p.m. Reyes reportedly robbed two people, his seventh and eighth victims, at Tom’s BBQ in Mesa at knifepoint.

Police say around 11:57 p.m. officers were dispatched to an abandoned car at the intersection of Guadalupe and Springwood in Mesa. The vehicle was found to be the stolen Mercedes C320. Police say the car was unoccupied and out of gas. Inside, police say they found discarded food containers from Tom’s BBQ as well as Reyes's fingerprints.

Authorities say Reyes's crime spree continued on October 1, around 6:34 p.m., when he allegedly robbed a ninth victim at gunpoint and took their GMC Sierra pickup truck. At the time of the robbery, Guillermo placed a backpack in the bed of the truck, and police say due to a hole in the bed of the truck, the backpack fell to the ground with the blue LA Dodgers baseball cap inside.

The next day, officers found the stolen GMC Sierra in Chandler where it had been abandoned. Police say Reyes's fingerprints were found inside.

Next, Guillermo went to a Fry’s Grocery Store located at 1950 W. Ray Road in Chandler. Here, he reportedly robbed an eleventh victim at gunpoint. He stole the person's silver Jeep Grand Cherokee and then fled to Mesa, police say.

As the day continued, around 4:53 p.m., Guillermo ran into a twelfth victim’s garage near Baseline and Dobson roads in Mesa. He stole their Infiniti Q40 at gunpoint, and was seen wearing a camouflage shirt. Police say the Jeep Grand Cherokee was left at the scene as Reyes fled in a new stolen vehicle.

On October 4, the Infiniti Q40 was recovered at the Tempe Marketplace. Reyes’s fingerprints were found in the vehicle along with the camouflage shirt belonging to the owner of the blue Ford Mustang and a receipt for Walgreens. Video surveillance from the Walgreens showed a male subject wearing the camouflage shirt entering the store after the robbery.

This victim reported numerous credit cards stolen at the time Reyes took the Infiniti Q40, two of which were used on at least three occasions after the robbery. On October 6, 2020, one of the card’s was used at a Fry’s Food Store in Scottsdale. Video from that Fry’s shows Reyes making a purchase.

Police say Reyes was captured around 11 p.m. on October 8, after he barricaded himself in a hotel room in Chandler.

Chandler police’s SWAT team responded, and Reyes surrendered to them around 1:30 a.m. on October 9. Police say a search warrant was executed on Reyes’s hotel room and police recovered a handgun loaded with red-tipped ammunition. This ammunition matched a live round found at the scene of the shooting at Diamond's Sports Grill.

Authorities say Reyes was booked into jail for 19 felony charges, which include multiple armed robberies, stolen vehicles, and aggravated assaults.