Primates found living in Mesa facility - but who is caring for them? 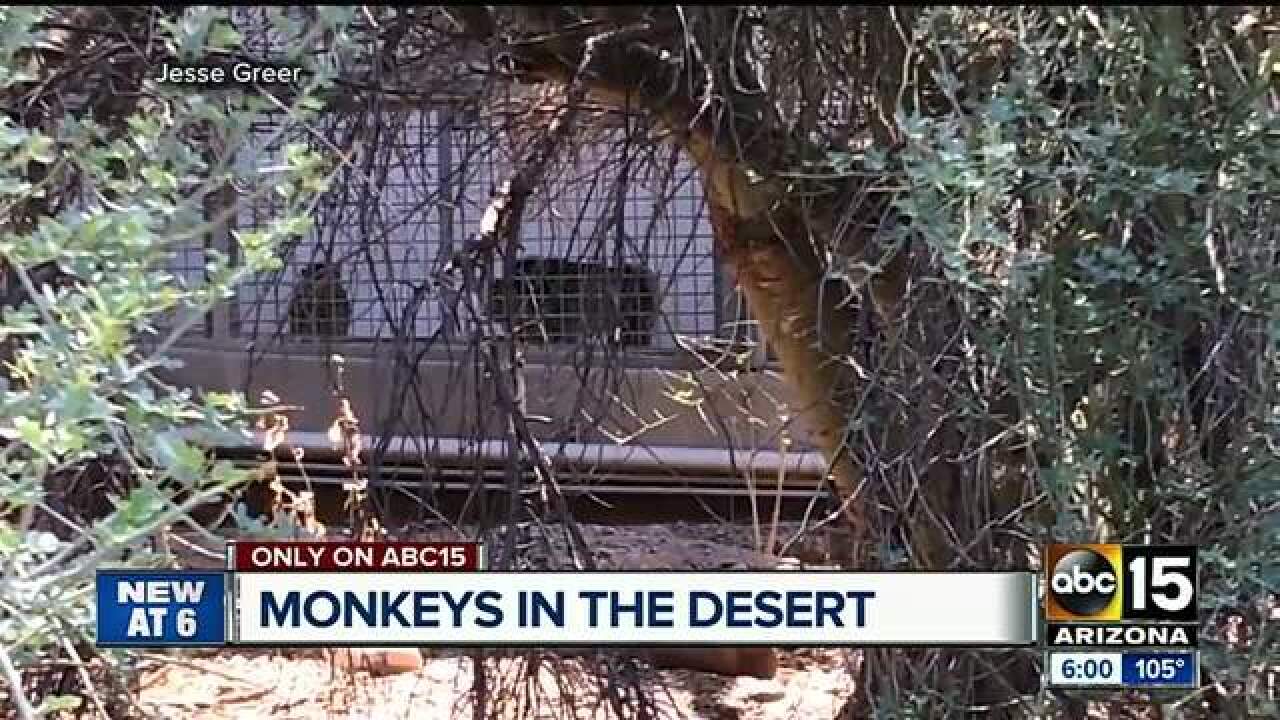 It's a big mystery smack dab in the middle of the Arizona desert.

On the outskirts of Mesa, off of Loop 202 and Higley Road along the Salt River Project Canal, is land blocked off by signs saying "no trespassing" and "danger."

Flanked on one side by an ammunitions testing facility, there is a mystery primate farm that is still thriving. Drone video taken as recently as this past weekend shows cages full of primates in the desert.

One man, who requested that he remain anonymous, said he decided to check out the area after his son told him about the primates in the desert.

"He found it on the web, and we were just intrigued."

The man said a quick search about the primate farm yielded YouTube videos and information stating that the former primate sanctuary had then sold the animals to science for research purposes. Some said the primates remaining on the farm were those left over after the lab studies ended.

"When you hear that there is a monkey farm in the middle of Mesa, it sounded interesting to me. Everything I read on the internet, that it was abandoned, and monkeys left there eating each other, that's what intrigued me to go look and see."

The man said he was chased off the property before he had even approached the gate.

"All of a sudden this guy comes at us in one of the Razor carts, he was yelling at us get out of here," said the man.

Another Valley man, Jesse Greer also got up close and personal shots of primates while he was out exploring. Just like the first man, he too wanted to know why these primates were out there in the middle of the Arizona desert.

Greer also obtained video of the primates living in cages.

Both men expressed concerns about the animals.

"It just makes you wonder, why they're out there. Why so many? Why has nobody heard of it? Why are they hidden and tucked away?"

Former caregivers and contractors who previously worked at the primate facility are now speaking out to shed some light on what's going on.

A man who asked not to be identified said he recently worked there as a private contractor. He explained that the facility is now managed by the University of Washington. Job listings hiring for animal technicians can be found on the Indian community's website. The posts refer to the primate facility as a "breeding colony" of the Washington National Primate Research Center.

Duties include: Caring for the animals, transferring them from soiled to clean enclosures, observing the animals for abnormalities, and maintaining records related to feeding.

"They do primate research," the contractor explained. "They take very good care of the primates. Everything is very clean; the living facility for the monkeys is air conditioned. You have to wear masks and be covered from top to bottom...almost like a hazmat suit. But I was told that's to protect the monkeys more than it is to protect you."

The documents ABC15 found on the National Institute of Health website described a breeding colony of Pigtail Macaques "for the support of research" and said they're essential for biomedical research.

ABC15 reached out to several agencies to try and get answers. The city of Mesa, Maricopa County and the Arizona State Department of Agriculture had not heard about this. We were directed to the National Institute of Health. A spokeswoman wrote ABC15 back said everyone was out for the 4th of July holiday and they would look into it.

ABC15 reached out to the University of Washington and the WA National Primate Research Center for a comment about this project; as well as reaching out to the USDA to see if they are also monitoring the welfare of these animals. ABC15 has also reached out to tribal officials at the Salt River Pima-Maricopa Indian Community. We have not heard back from them yet.