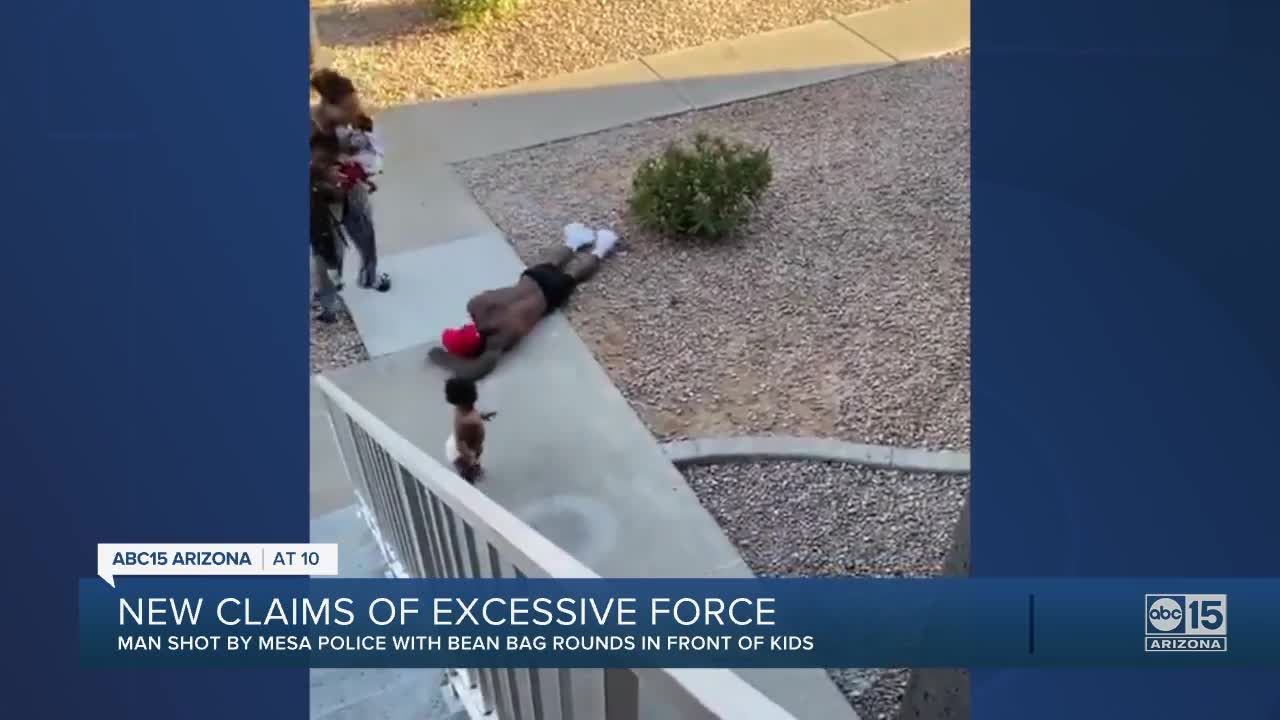 Man shot by Mesa police with Bean Bag rounds in front of kids. 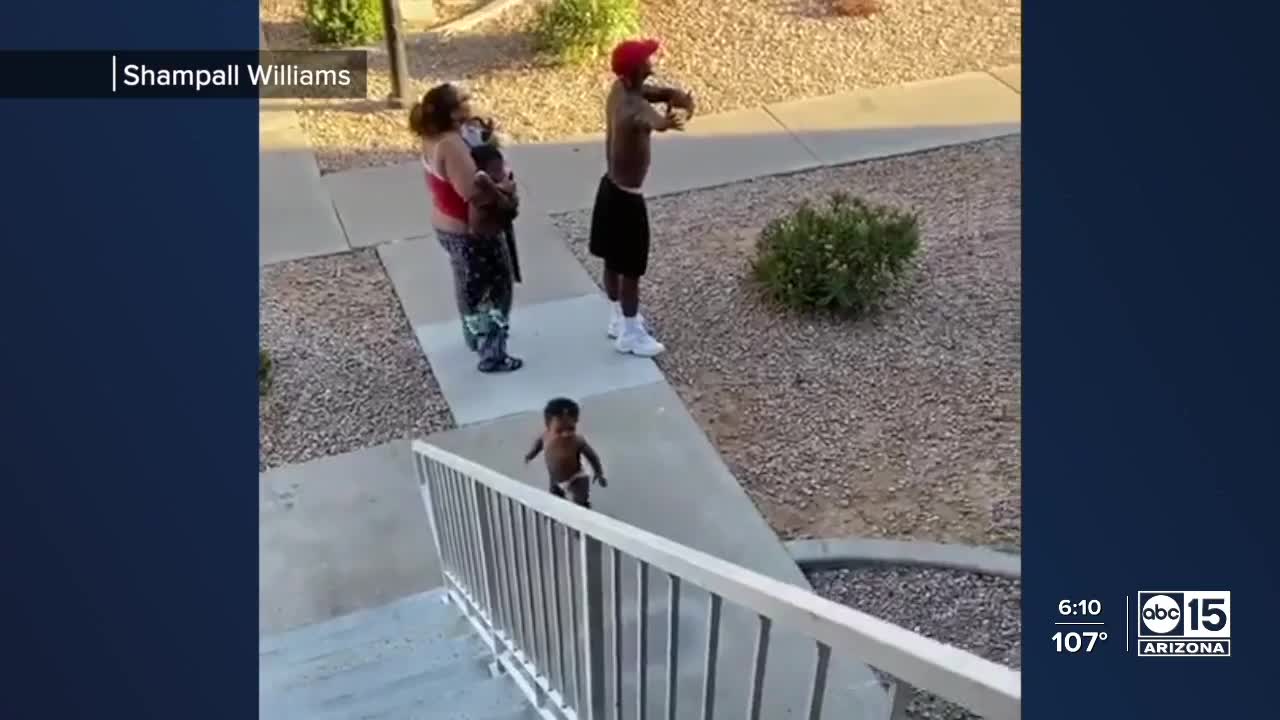 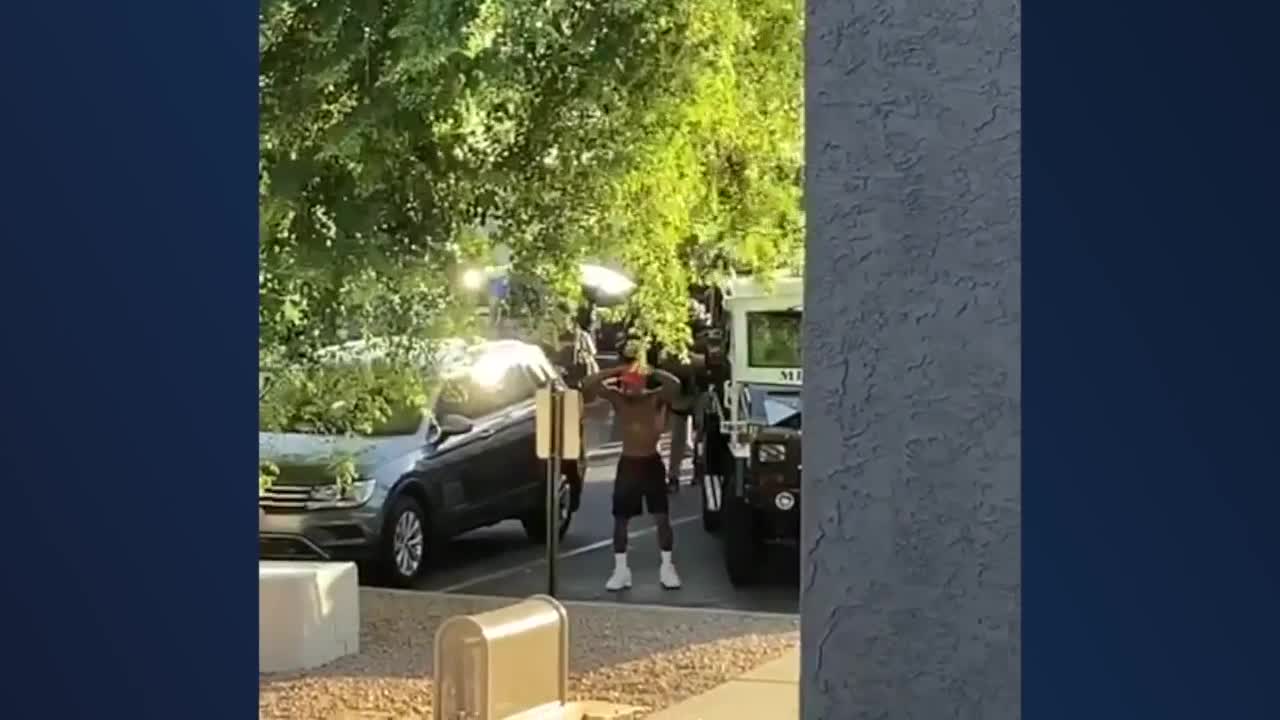 MESA, AZ — Mesa SWAT is facing scrutiny after a video posted on Facebook shows them shooting multiple bean bag rounds at a man at an apartment complex in Mesa Thursday.

In a video shared on Facebook by a bystander, officers shot numerous rounds of bean bags at Lorenzo Jones while five children were nearby.

WATCH THE VIDEO OF THE INCIDENT IN THE PLAYER ABOVE.

According to court documents, police say Jones was in a verbal argument with his fiancee and her sister on July 6.

Jones allegedly punched his fiancee's sister in her face at least three times, causing her to fall. Her children then attempted to stop him from hitting their mother, and Jones reportedly punched and shoved them and left the apartment.

When the victims got back to their apartment, they called police. When officers arrived, they say Jones was not compliant and ran from officers.

Jones also reportedly ran at an officer full speed and jumped and punched the officer in the face causing him to fall.

He then resisted arrest and had to be tased, officials say. Officers also say they found marijuana in Jones' pocket at the time of the incident.

Sunday July 12, Jones was released from jail on a $5,000 bond. On Monday, Jones did not show up for his status conference and a judge issued a bench warrant.

When Mesa SWAT went to serve the warrant on July 16, Jones, a woman and five children came out.

A neighbor captures video of the confrontation in the walkway outside Jones’ apartment. Jones tries to argue he came from court earlier in the day and could not have a warrant for failing to appear. After several commands, Jones complies with the officers. He puts his hands up prior to an officer shooting a less-lethal bean bag round.

The first bean bag shot happened while a woman was holding several kids directly behind Jones.

Jones then fell to the ground, appearing to be in pain as the mom got the children out of harm's way.

“This is not right, said Tenisha Gaston, Jones’ fiancee. “What's going on in the world, and now I am dealing with this.“

Jones’ fiancee said the officer fired the bean bag round while she and her children were just feet away.

“He is a good man,” Gaston said “My kids were scared.”

The officer fired two more bean bags after Jones was already laying on the ground.

Friday, Gaston met with both a local pastor and a lawyer who are vocal about police brutality concerns in Mesa.

“There was no need for this,” said civil right attorney Benjamin Taylor. “Under the law, he was complying. He had his shirt off, no weapons on him. He wasn’t a threat.“

“In policing, we see a lot of excuses when we talk about force and excessive force and what was justified and what was not,” said Pastor Andre Miller. “Nobody reasonable is saying ‘Yeah, I would have shot this guy.’”

Police say Jones was taken into custody "when he complied with commands."

Fire officials say he had "minor abrasions" as a result of the incident.

"They [the officers] felt that he was armed and dangerous," Mesa Police Chief Ken Cost said. "It would be premature for me to comment on the split-second the officer made the decision," said Cost. He added that the use-of-force review should take about a week and he is not “going to jump to a conclusion on that until I have all the information."

"We understand that any time force is used it raises a lot of questions. Less-lethal tools are exactly that, less lethal, and were developed to prevent violent actions, protect the public, save the lives of suspects as well as officers," Mesa police said in Friday's statement.