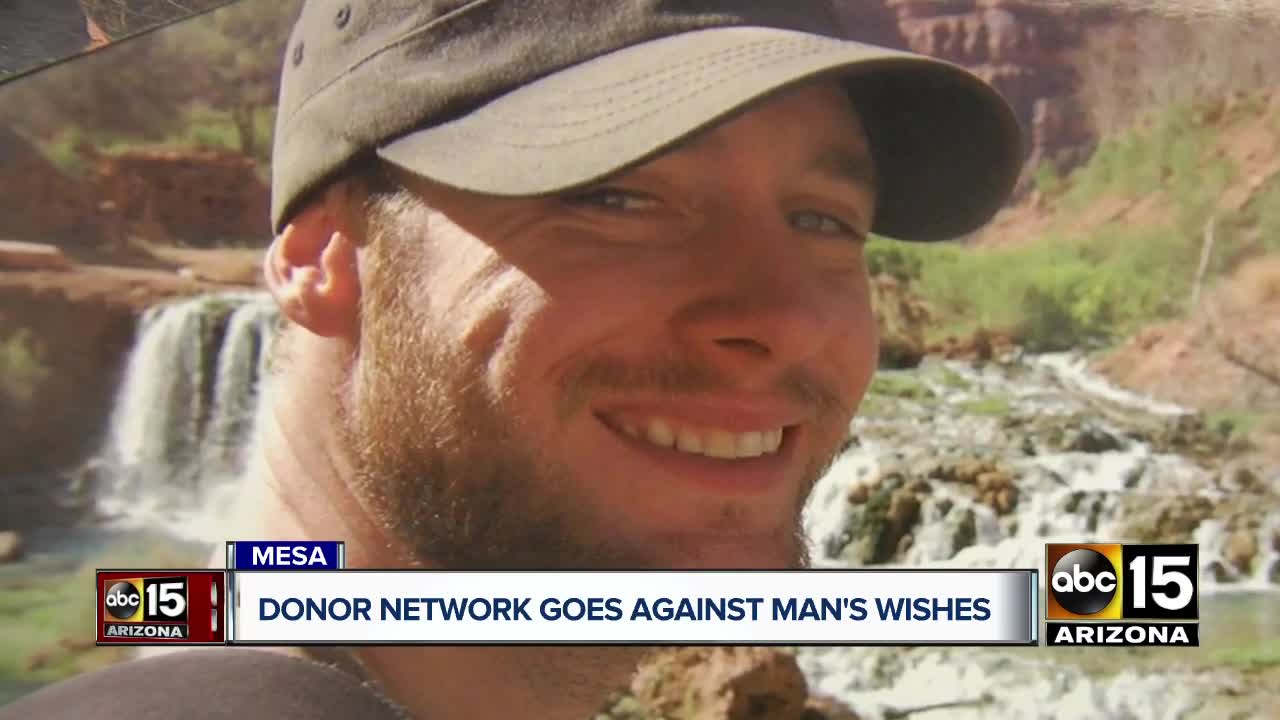 The family says Donor Network Life of Arizona wrongly harvested son's corneas without him being a donor. MESA, AZ — Years after their son died in a motorcycle accident, a family in Mesa continues to not only grieve the loss of their son, but the way they say Donor Network Life of Arizona "wrongly harvested" his corneas without him being a donor.

Donor Network of Arizona touts itself as "giving the gift of life" through the procurement of organs and tissue. The Tune family says their dealings with Donor Network have been the complete opposite.

"They came into our lives at a time when we were having major turmoil and grief...it devastated us to try to fight them off," said Frank Tune, Christopher's father.

Frank and Diane's son, 31-year-old Christopher, died while riding his motorcycle to work. Christopher wiped out on his bike.

The Tunes say the Donor Network of Arizona began calling them right away on the same day their son passed away.

"We offered them the proof with the license that it did not have the symbol on it, but they never took the time to do any research," added Frank.

From then on, the Tunes say their grief for their son was compounded with the persistence from the donor agency to recover Christopher's corneas.

"Our son had beautiful blue eyes, and we can’t look at a picture of him. They had already made up their mind what they were going to do, and it really didn't matter what we said," added Frank.

Diane called the coroner's office to remind them not to give the Donor Network of Arizona access to her son. She also says she sent the agency an email notifying them, once again, that their son was not a donor, but the family's pleas went unheard.

Diane says while on the phone with the coroner's office, she was told, "Oh yeah, donor network was here, and they took his corneas at 12:05 a.m."

"I said, 'He's not a donor!' and at that point, it got their attention again," Diane recalls. "And they did a little research, and they discovered, no, he wasn't a donor, they made a mistake."

Attorney Melinda Sloma, along with her co-counsel Ariel Amar, took the case against Donor Network of Arizona to Superior Court Judge Theodore Campagnolo.

“Through their (Donor Network of Arizona) intentional ignorance after they were told repeatedly by our clients that Christopher Tune was not an organ donor, they turned a blind eye to that and harvested his corneas anyway,” says Sloma.

In his ruling, Superior Court Judge Campagnolo ruled in favor of the Donor Network, stating the case against the agency lacked proof of "malicious intent" and that through Arizona's Anatomical Gift Act, the Donor Network is "clearly entitled to the Act's good-faith immunity."

In the ruling, the judge acknowledged that Christopher was not an organ donor and that there had been a mistake at Motor Vehicle Division back in 2010 when Christopher was issued a license.

“Because of the protective nature of the statute, essentially there is very little recourse for members of the public to take against Donor Network of Arizona because that is an extremely high burden to prove,” says Sloma.

Once the mistake was caught and noted, the Donor Network of Arizona returned the eyes to the funeral home before Christopher was cremated. The Tunes have filed a motion to appeal the judge's decision, hoping that their case now goes to a jury and will also go to the legislature for further action regarding the law.

“Because of that law, that’s what we need to get changed, we need to have changed. It will never be right. I just don’t want this to happen to other families,” the Tunes said.

The Donor Network of Arizona could not comment on the specifics of this case and can't discuss or confirm the donor status of an individual due to federal regulations. They did let us know that since the registry was created in 2003, they've worked on improving the communication between them and the MVD. When it comes to donors registered between 2008 and 2014, Donor Network says they now request a copy of the person's ADOT application to make sure they actually checked the box for donation.

Editor’s Note: This story uses the word “harvest” as a quote from the Tune family and their attorney. Both describe this specific act — taking an organ without authorization by the family – using that specific reference. In fact, calling the process of removing an organ or tissue for transplant as a “harvest” was once viewed as appropriate use by those involved in organ donations. In 2005, the Organ Donor Family Council of the Association of Organ Procurement Organizations (AOPO) identified “procure” or “recover” as the preferred words to describe taking organs for transplant. Through our editorial process, ABC15 has determined that though the term used by the Tune family is seen as inappropriate by AOPO, it both accurately records what they said and what they believe happened to their son. Therefore, we have put the word in quotes.