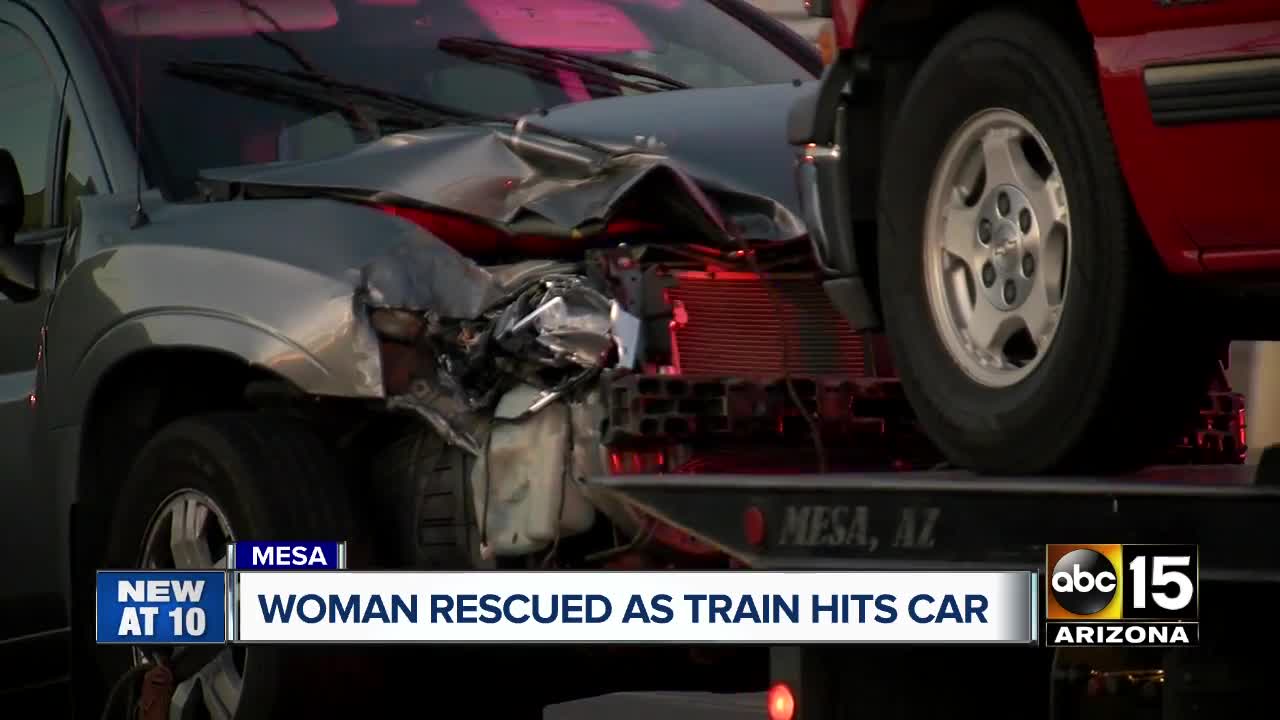 Close call between a train and a Valley woman's car. 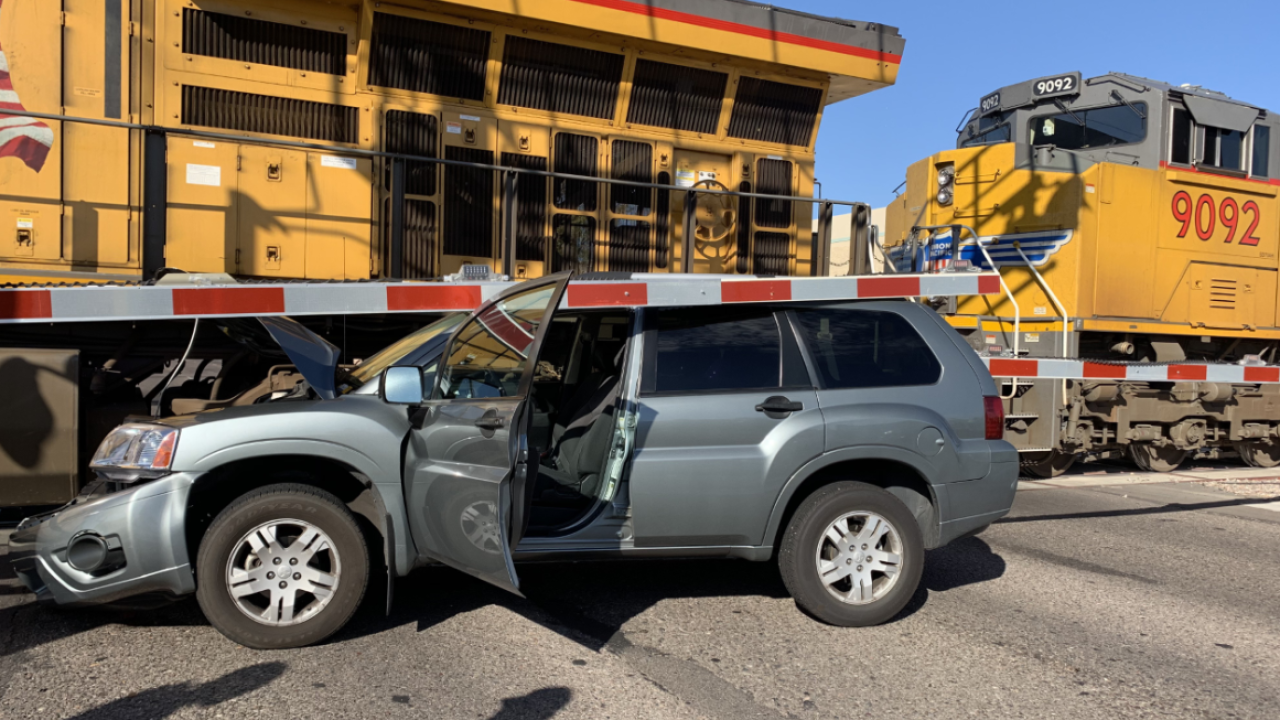 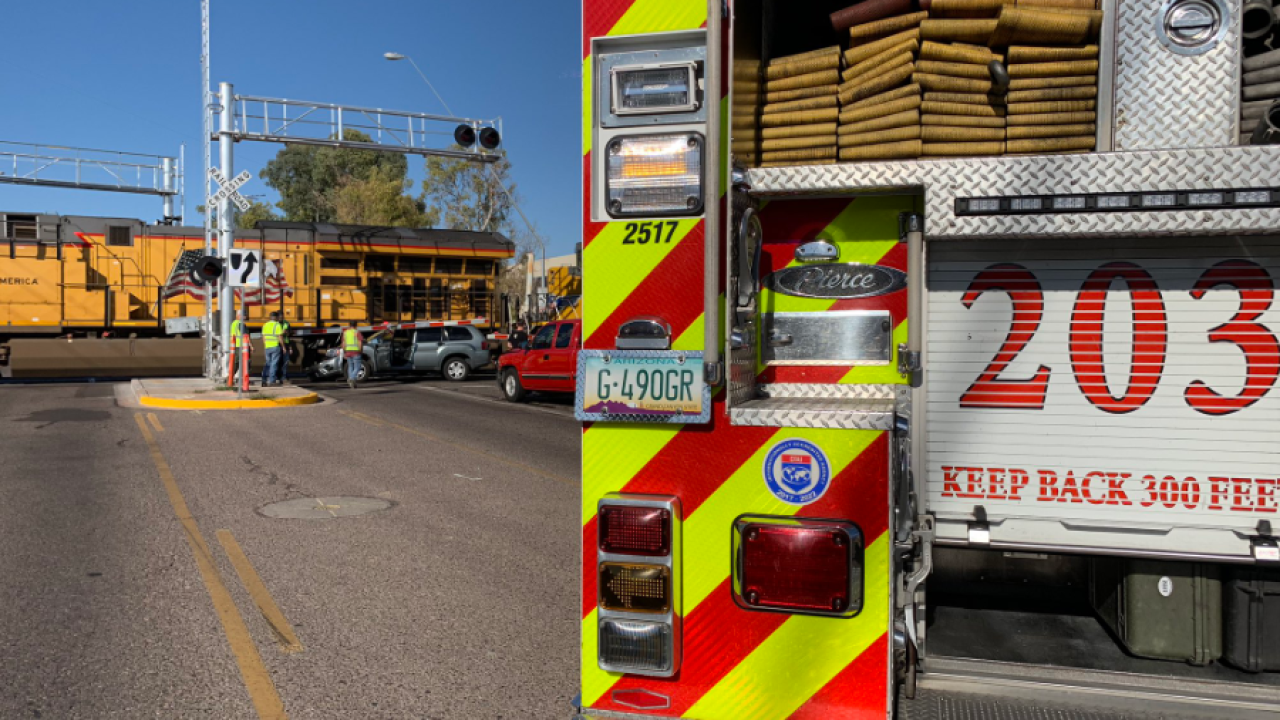 MESA, AZ — A Valley woman is lucky to be alive after her car was rear-ended and pushed into the path of an oncoming train Saturday afternoon.

Witnesses tell ABC15, the woman slammed on her brakes to avoid hitting the railroad track arms and was hit from behind by a red pickup truck, forcing her car onto the train tracks.

Gloria Carcia got out of her vehicle and pulled the woman to safety before the train collided with her car.

"We both started running backwards because the hit was getting so close and then when the hit went pow! Her car almost hit us from trying to get away from the train wreck."

Mesa firefighters say no one was injured in the wreck.

"I'm just glad that lady is okay and she keeps telling me 'you saved my life,' and I really don't feel I did but she says I did and I just thank God, I was at the right place at the right time," said Carcia.

DRAMATIC VIDEO: look at the top right corner as a train hits a car at a railroad crossing in Mesa. Tonight at 10 hear from those involved and ran to help save a life. pic.twitter.com/HfHZji65uZ

North and southbound lanes of traffic at Alma School, Extension and Center roads will be closed for several hours, police say.

Crews are currently on scene of a 2 vehicle MVA with 1 vehicle into a Union Pacifc train. There are no injuries or casualties but is currently blocking north and south bound lanes of traffic at Alma School, Extension, and Center roads. Please avoid these areas. pic.twitter.com/7BbgXZ2XWT

Commuters are advised to avoid the area while crews work to clear the scene.

due to a minor crash at Alma School/Broadway involving a train.

Remember to slow down and be alert while approaching railroad crossings! pic.twitter.com/JykAEUcyI0