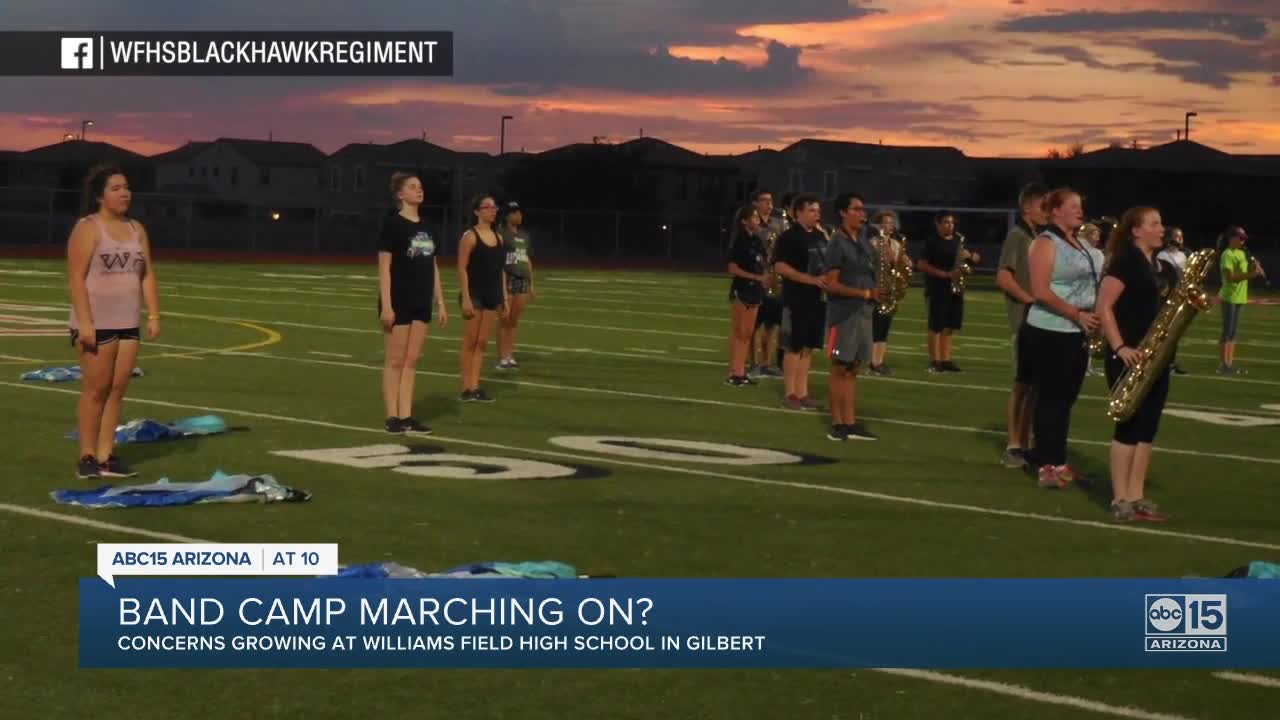 GILBERT, AZ — The pandemic has thrown off the entire school year. Right now there is no clear date on when Arizona students may return to in-class learning, but some school leaders are already eyeing in-person gatherings.

Coaches and band directors are planning their first practices, despite the state guidance prohibiting gatherings of more than 50 people.

Williams Field High School in Gilbert has so far delayed the in-person activities or athletic events in July.

But in a newsletter, marching band leaders said they were "sad" the district cancelled drumline camp this week, and were "looking towards our band camp the week of July 20th."

A Higley Unified School District spokesperson told ABC15 the status of activities are "reviewed on a weekly basis."

So it is unclear if the marching band, known as the Blackhawk Regiment, will even be able to practice next week, despite their plans.

If they do move forward though, they will face some pushback and criticism.

"The school campus should be closed and no one should be on the campus until it’s allowed," said Mina Bernabe, a former booster for the band.

"There are a lot of parents who are afraid and worried and their kids are worried, 'If I don’t go what is going to happen? Am I going to be left out? I'm missing out. But then if I do go, am I exposed? Am I going to die?'" she said.

The waivers also state parents "assume the risk that [the] child may acquire COVID-19" and possibly transmit it to the household. The binding document asserts that the district cannot be held responsible for any trauma, injury or death.

"Music education doesn’t stop just because we are not all in a room together," said Heather Kelch. "We know better and we have a responsibility to do better."

Already though, the competitions are cancelled this season.

"We just felt like it was not going to be possible for them to do competitions," said Matt Kozacek, President of the Arizona Marching Band Association (AzMBA).

The other main competitive judging and oversight association, the Arizona Band and Orchestra Directors Association (ABODA), have also made the same decision.

"They are following suit with cancellations as well," said Kozecek.

It's a tough balance for schools.

Kids rely on band and athletics for scholarships, friendships, and to fulfill their passion.

Now districts have to decide - can they still make that happen while preventing the spread of an invisible, contagious and deadly virus.

A Williams Field parent and president of the 'Black Hawk Band Boosters' reached out to ABC15 Tuesday night to share the following message:

"I am just as worried about my daughters and families [sic] health as any parent would be. I am also of the opinion that mental health is just as important as physical health. I can tell you that since school was closed last year, the last several months have led to my kids becoming withdrawn and depressed. They are missing their friends and pursuing their passions of music and art. It is the moment as a parent, that you look into the eyes of your child and say what is the greater risk. As a family, we have decided that allowing them to be part of the band experience is essential to their mental and physical health and one that we are willing to do, so long as the safety measures in place minimize risks of getting the virus."

The booster went on to outline the safety precautions the band is prepared to take should they be allowed to hold practice in the near future.

ABC15 reached out to several districts and found that most all of them have postponed the in-person gatherings of athletic teams and other activities. Peoria, Paradise Valley, Scottsdale, Phoenix Union, and Higley have all delayed the starts until July 20, at the earliest.

“Football teams have voluntary practice, following AIA guidelines. These involve pods of 10 students, with social distancing and no touching of footballs other than their own. No locker room access, all outdoors, no shared water, etc. Focus is on conditioning whether at the site or virtually.”