The new soda shop that has Gilbert buzzing 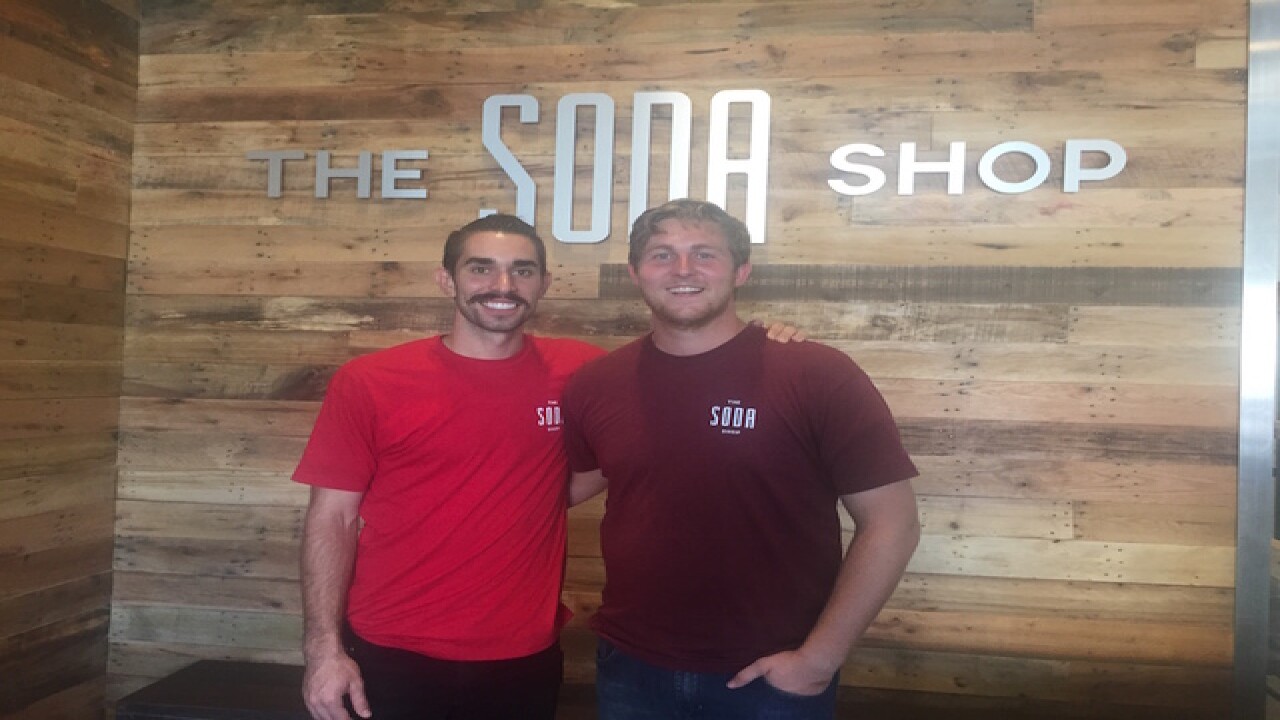 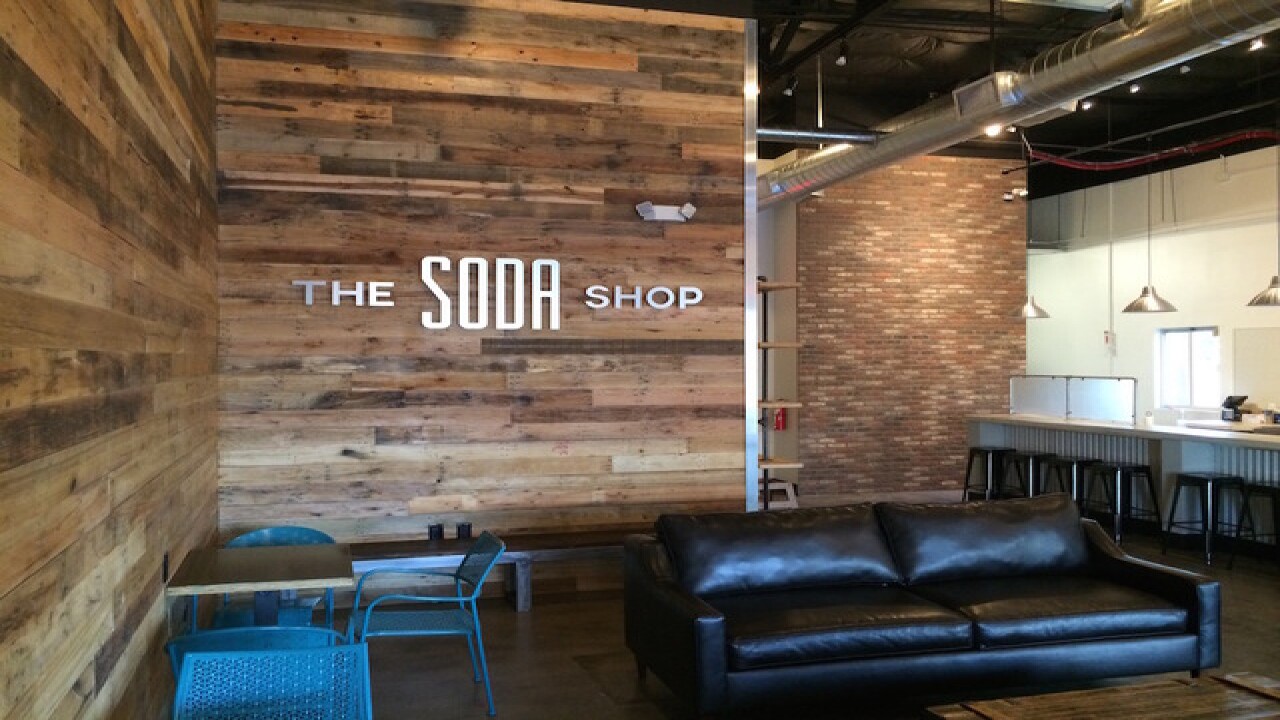 Dylan Roeder and Chase Wardrop were not prepared for the response when they opened the door to their modern yet simple soda shop.

They didn’t expect to see the constant rush of customers stopping by to check out the latest grand opening in Gilbert or find themselves running outside to help direct cars waiting to go through the drive-thru.

Nor did they anticipate the number of cups, straws and ice they'd need to keep up with demand.

Born and raised in Gilbert, the two 24-year-olds decided to postpone their college degree programs and take a crash course in business by becoming full-time business owners themselves.

They leased an empty unit in a recovering strip mall near Baseline and Greenfield roads, poured the concrete flooring, nailed wood pallets to the walls, and hand-built the tables.

A year of hard work later, The Soda Shop officially opened its doors.

But it’s more than just standard fountain drinks. Add in some Sprite, lemonade and blue raspberry and you have the “Shark Attack,” a sweet carbonated drink that the kids will sip up in seconds (they’ll even find a signature gummy shark at the bottom).

Other popular items include The Happy Camper, root beer, marshmallow and Half and Half; Big Daddy, a combination of Dr. Pepper, raspberry and coconut, and The 480, diet coke, cranberry and fresh lime.

Moms stop by for a mid-morning pick me up, high schoolers come to chill and gossip after a long day at school, and families stop by for an after-dinner treat.

They have fresh-baked cookies from The Sweet Tooth Fairy and custard, for those looking for something other than soda.

Who's excited to try out some of our most colorful drinks tomorrow? Introducing Dew or Die, Berry Good, and a personal favorite Shark Attack (because who doesn't love a gummy shark in their drink)! #thesodashopaz PC: @jacimariesmith

A photo posted by @thesodashop_ on

HOW THE SODA SHOP GOT ITS FIZZ

Dylan was studying business information technology at Brigham Young University in Utah and Chase was studying finance. After going to classes and listening to lectures for a few years, they both became burnt out and their interests waned.

Chase was a teacher’s assistant for an entrepreneurship lecture series where he listened to founder after founder talk about how their companies got their start—they went after it and made it happen.

“Their stories just inspired me,” he said. “[I thought] I need to take chances on myself and start something.”

While flying some 30,000 feet in the air back to Phoenix, they discussed entrepreneurial possibilities. It started with developing an app and then moved on to potentially opening a shaved ice shack, but one seemed too complicated and the other required too many permits.

The idea of soda gave them the pop (as the Midwesterners often say) they were looking for.

The next challenge was telling the parents about their plan.

While initially hesitant, months later Chase and Dylan’s moms would find themselves behind the counter helping out and filling orders or running to the nearby store to re-stock supplies.

They gathered up 30 friends and crowded around the kitchen, even at local fast-food chains, to start the mixology of which flavor combinations would be featured on the menu.

“90 PERCENT OF BUSINESSES FAIL AND WE'RE AWARE OF THAT”

Owning and operating a small business is tough and Chase and Dylan aren’t shy about the fact that they have a lot to learn.

On a Thursday afternoon—five days after the grand opening—he talks about the initial challenges. They’ve at times run out of supplies, made a customer's order wrong, and been told to pick up the pace, all typical issues first time business owners face.

They apologize, fix it, and continue on.

Feedback is part of the experience and they're welcoming to it because they know it will make than better in the long run. They're thankful for the Gilbert community being so supportive.

“They’re nice to us. They’re appreciative. We show them a smile, they share a smile with us. And their patient with us as we learn,” Roeder said.

Eventually, standards will be developed to streamline the processes so inventory can meet demand and the customer experience is consistent each time someone walks through the door.

It's clear though that they've ignited something within the community. With over 5,000 followers already on Instagram, dozens have posted photos of each soda they've tried on social media.

A photo posted by lil shipps (@chlxoemarie) on

While already big in Utah, Dylan believes more soda shops will begin to pop up around the Valley. They won’t all be run by him and Chase, but probably by other entrepreneurs looking to get in on the success.

The two are open to expanding The Soda Shop to other parts of the Valley, but that goal is months down the road. For now, they’re focused on their flagship location and perfecting it.

“My goal has always been to start a business since I was like 10 [or] 11 years old. Did I ever think it’d be a drink shop? Never. But, I was like I want to get my feet wet,” said Wardrop.

They both have not forgotten about their college degrees and plan on graduating within the next year. They just needed a little sugar break to get them re-energized.