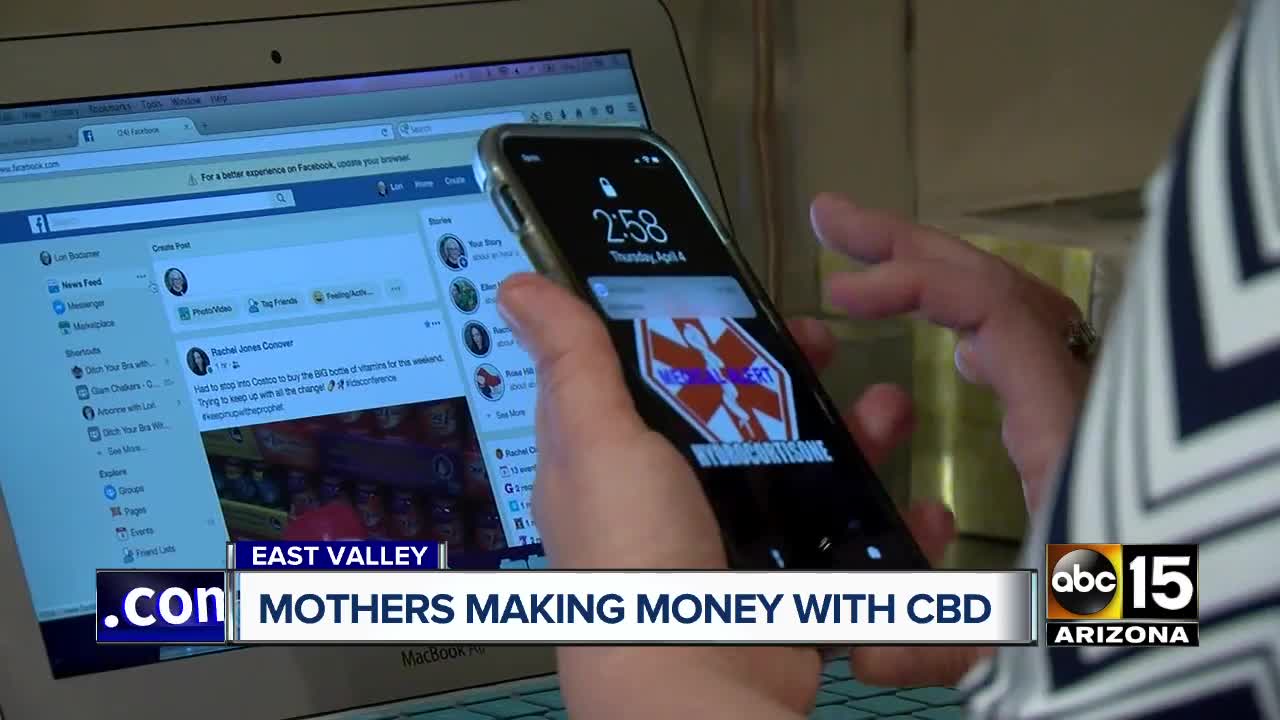 Move over leggings, makeup, and jewelry. Selling CBD, a compound found in the cannabis plant, is quickly becoming the hottest side hustle for Valley moms. 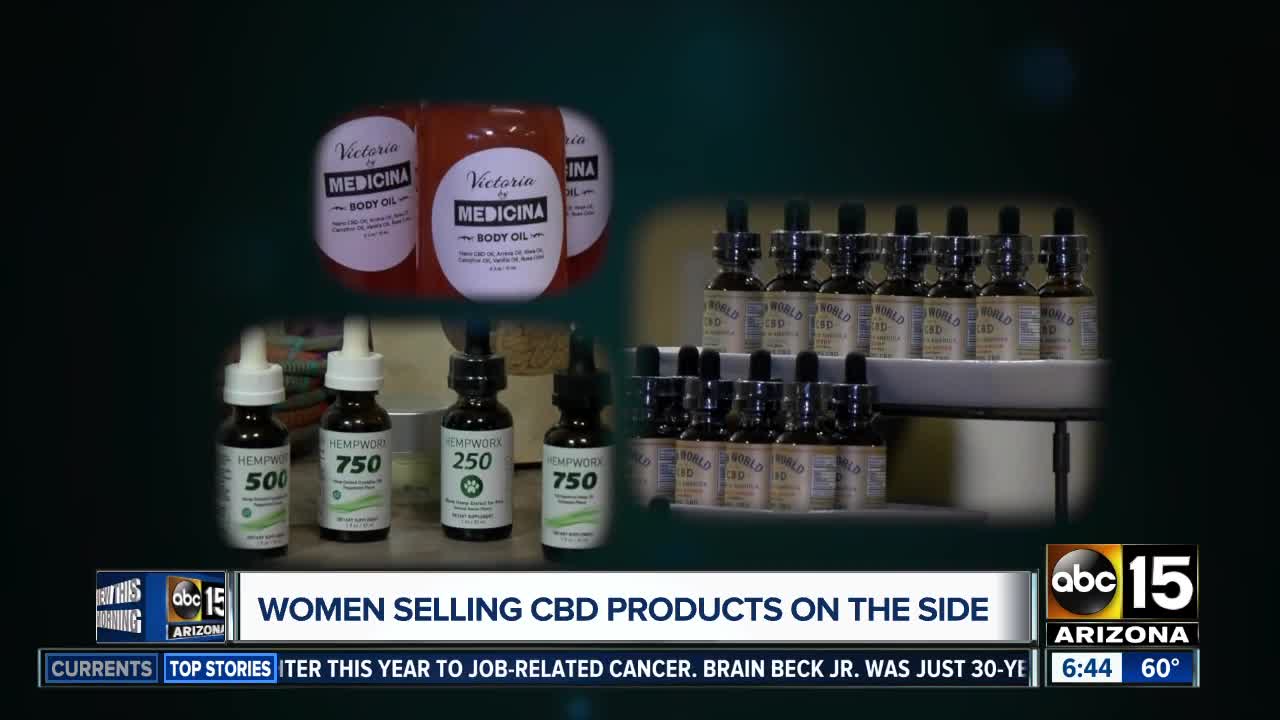 GILBERT, AZ — Move over leggings, makeup, and jewelry. Selling CBD, a compound found in the cannabis plant, is quickly becoming the hottest side hustle for Valley moms.

Dozens of women are now working right out of their living rooms, selling everything from CBD tinctures for humans and their pets, to honey sticks, balms, and lotions.

You'll see women selling the products through social media, some are opening up booths at neighborhood events, and you'll even find CBD "ladies night out" parties -- small intimate gatherings where women share their CBD stories with friends and neighbors.

ABC15's Sonu Wasu is checking out one of these "CBD parties" and taking a look at just how much these saleswomen are making, Monday night on ABC15 News at 10 p.m.

It was at one such party that we met Brent Mann, owner of New World CBD and one of his sales associates, Britney Kass. Kass is a San Tan Valley mom who is now selling CBD after finding success with it for her own ailments.

"The reason I got started with New World CBD was because of my endometriosis," said Kass.

She told a small group of women about the pain and suffering she endured until she tried CBD, which really helped ease her discomfort. The women were all people Kass knew and had invited to the party in Gilbert.

Her powerful testimonial seemed to have the women intrigued.

She said the reason she wanted to educate others about CBD was to share how it had impacted her own life, and also to let them know because of the popularity of the product, what to watch out for when it came to the real stuff, versus snake oil in a bottle.

Kass said it's important to research the company you choose to sell for, and make sure you knew how they make their products. With New World CBD, Kass said she could confidently explain the process from "farm to bottle".

Mann, who founded the company, said affiliates working for his company could make up to 35% in commission. He decided to take his web-based business straight into people's living rooms by hiring passionate salespeople like Kass.

"What is convincing about her? I think the fact that she actually took the product herself, she tried it and it's worked for her," said Mann.

Queen Creek mom Lori Bodamer is another CBD saleswoman who runs the business right out of a guest-bedroom-turned-office. She too started taking CBD for chronic pain, before deciding to sell it.

Bodamer said she would rave about it to all of her friends, so instead of referring them to someone else, she decided, why not sell it herself?

ABC15 asked Bodamer how much money you could make with this new side hustle.

"You can make from very little to a lot. I know a few women who are making a couple thousand a week," said Bodamer.

Realistically, what would it take to get to that level? Bodamer explained the women who make a lot of money are doing it full time, networking a lot, going to vendor events, and they also have a big team of people working under them.

It is the same business model used by companies like Mary Kay and Avon.

Bodamer worked for a company called HempWorx. ABC15 reached out to HempWorx for a comment, and got no response. Their website indicates meeting certain sales goals can win you more money, and like Mary Kay, even put you in the fast lane for a brand new car.

"One of the ways is 'car money,' so you don't actually win a car, but they start you at $150 a month toward a car, or more, then you can have your own car," explained Bodamer.

Phoenix mom Zulema Rodriguez got into the CBD business by working for herself, and hiring women to sell her original products.

She worked out of a space tucked in a Phoenix neighborhood called a "Cocecha", described as a small community for people to come and gather. Her business is called Medicina.

Rodriguez, who studied chemistry, has created her own line of products to help people find relief. She was a big believer in using plants over pills, and had created a solid rub, and oils that you could use on achy body parts.

Rodriguez explained that she used "nano CBD," which penetrated faster into your blood stream to bring deeper and longer-lasting relief.

Zulema said her homegrown business was a legacy inherited from her grandmother, who inspired her to create the natural products.

"There is a little piece of fabric in every packaging. It is reminiscent of my grandmother's house coat, her Bata," said Rodriguez.

She also created specialty items dedicated to her friends.

"Our Victoria rub has become my biggest seller. I can't make enough of it. It has arnica, mango butter, and nano-CBD oil. It is supporting my sisters of any creed, any race, any age, that is what drives me," said Rodriguez.

"I want every woman to have, whether it be a little bit of kitty money, or to be able to self sustain," she explained.

All of the women ABC15 spoke to said the number one question they got from prospective customers is: Will it make me high?

"Of course not, it's not going to make you high, and yes it is legal," said Mann.

The CBD sold in stores and through these side hustles has virtually no THC in it. That is the compound in cannabis that gives you the so called "high".

Most women said their CBD side business helped them pull in $300 to $500 a month.

"That is a lot of money for a lot of women. It is a car payment, maybe two car payments. You can make a little bit doing this like once a day, even just sharing with family and friends," said Bodamer.

The biggest hurdle many of these moms face is to erase the stigma surrounding CBD.

While the FDA has put out a statement saying it is safe for human consumption, they are still warning businesses not to make any direct health claims. Business owners are getting around that by providing testimonials from those who have used the products.

Medical research on CBD products is in the very early stages here in the United States.