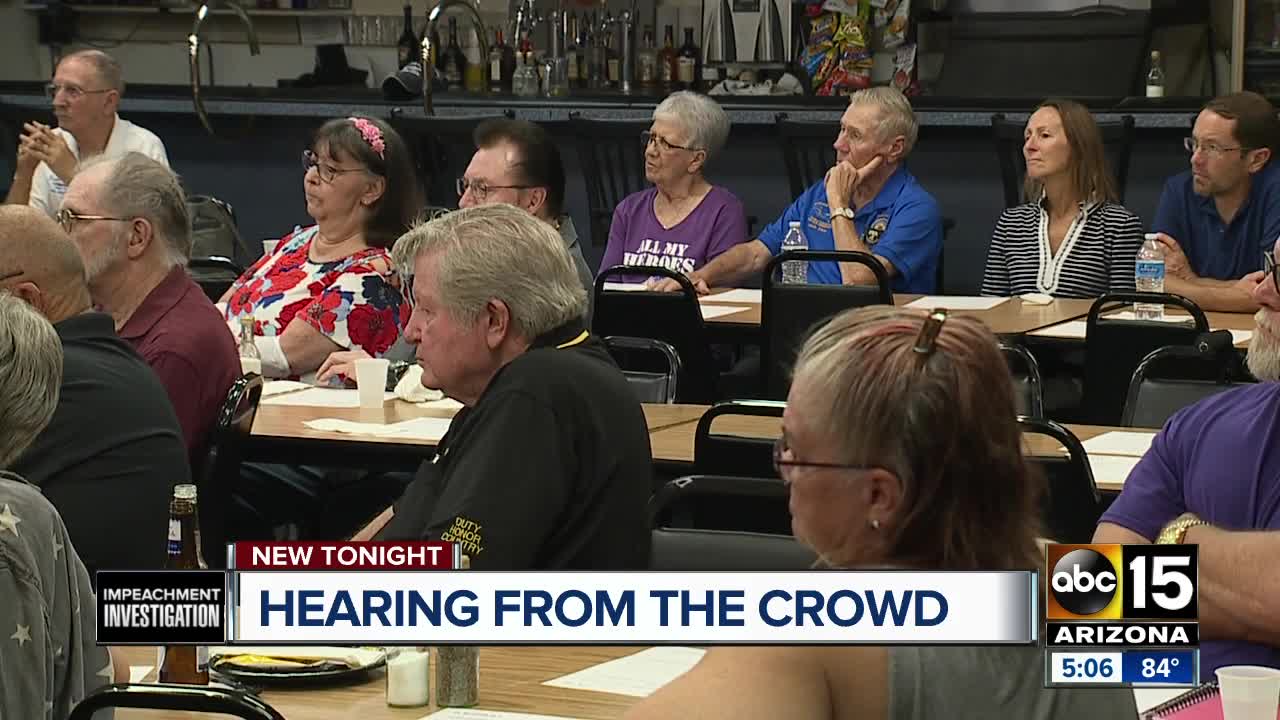 GILBERT, AZ — It's no secret where Arizona Congressman Andy Biggs stands on impeachment. He calls it an existential crisis. Biggs is one of President Donald J. Trump's most steadfast supporters. But back in the district (AZ 5), it's not Biggs' view on impeachment his constituents want to know about.

So whether it's hosting a resource fair for seniors in Gilbert, or meeting with veterans in Apache Junction, the talk is less about the news of the day in Washington, and more about what the Congressman can do for them. "I'm not an illegal alien," Randall Rikes tells Biggs at The Concerned Veterans Town Hall Wednesday, "but they wouldn't have to pay this $13,000 medical bill."

Rikes was among the 80 veterans who attended the event. Long waits for appointments, surprise billings and insurance that doesn't pay were among the issues that mattered most to the vets. Responding to Rikes request for help, Biggs told the audience, "This is one of the reasons healthcare keeps going up. For some reason they think you can pay it. They think it's going to come from the Veterans Administration."

Biggs promised his staff would look into Rikes' case.

Arizona's 5th district includes most of the East Valley, parts of Chandler and Mesa, all of Gilbert and Queen Creek. It is as conservative a district as you will find in Arizona. President Trump beat Hillary Clinton by 21 points in 2016. Martha McSally, who lost statewide, beat Senator Kyrsten Sinema by 13 points in 2018.

A recent New York Times Upshot/Sienna College Poll of what voters thought of Impeachment in 6 battleground states, found 53 percent supported the impeachment inquiry in Arizona while only 45 percent of Arizonans supported impeaching and removing President Trump.

While impeachment talk does not dominate the conversation, Biggs believes many of his constituents are frustrated by it.

"The point is I think people of good will say there are things you guys can be doing besides impeachment," Biggs said.

But the congressman resigns himself to the fact impeachment, "has sucked the air out of the room," and getting anything done in Congress until the matter is resolved, may be too much to expect.