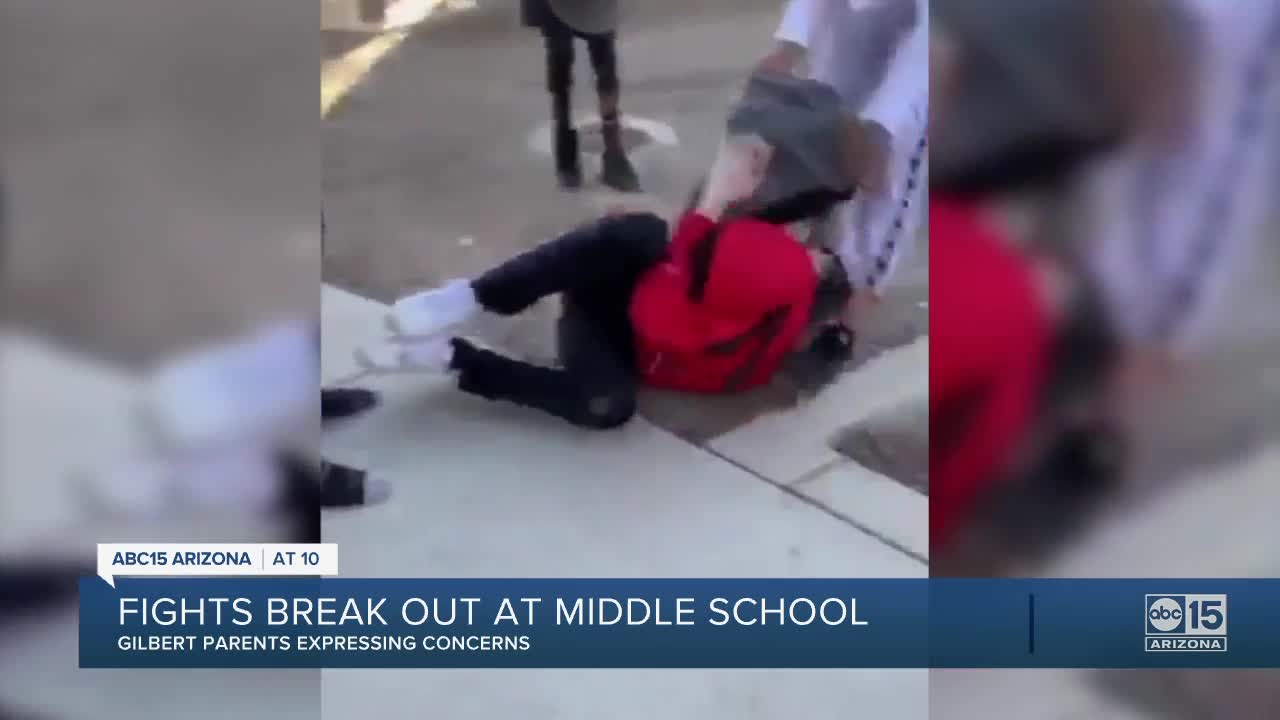 Gilbert parents expressing concerns of safety at the school

One 12-year-old boy was jumped by not only a classmate, but his classmate's older brother, who attends a different high school but somehow was on campus during school hours, according to police.

During the 15-second video, recorded by classmates watching, no faculty, staff, or school resource officers step in to stop the fight or prevent the punches and kicks. One adult is heard and briefly seen blowing a whistle.

One mother said, "I am completely shocked," when asked if she was surprised that no one, not even a teacher, stepped in.

Parents say it is far from the first incident involving the student, and his brother, attacking other kids. Hours later, another fight video off campus shows a child being punched and kicked.

Meanwhile, adults get involved. First, a woman shoves the child being hit and then another man stops the fight.

In both fights, the boys being hit sustained minor injuries - bruises and swollen noses. Neither went to the hospital, but police reports were filed.

The mother of one of the injured children said the boy hitting them in the videos has been involved in multiple other assaults, and shared videos appearing to show the child sucker-punching others in a neighborhood and at a mall.

Gilbert Police Department said the middle-school boy and his high-school brother have been suspended by their respective schools.

The Higley Unified School District in Gilbert said they could not comment on discipline because of student privacy laws.

“There's no security here. There's no watching of the children,” said the mother.

The district strongly disagrees with that characterization.

In a statement they said their “staff is trained on safety measures... [Cooley] has a school resource officer... and once school begins, there's a single point of entry."

“If the school has so many fights and so many issues, why do you have one school campus police? Why not multiple?,” wondered the mother of the injured child, who said she is transferring her son from Cooley.

“I want them to be more aware, to have more passion, to care, because these are our kids."

Gilbert police say no arrests have been made but they do anticipate filing charges going forward.

The district’s full statement can be read below:

“While we cannot address this issue specifically because it is under investigation, we are always working to assure all procedures are being followed. We certainly work to train all our staff on safety measures. Our middle school does have a School Resource Officer assigned to the site. The campus staff are in the courtyard and around school as students arrive on campus daily.
Once school begins, there is a single point of entry.

We’ve worked diligently to answer parent concerns since this incident. We are working closely with the Gilbert Police department to assure safety always on campus.

The Higley Unified School District takes this situation seriously. We follow discipline action in the code of conduct. When situations arise that go above the range, we can go above to other actions, all the way up to expulsion.

Some of the students involved are no longer at our school.

We remind students that it’s important to bring conflicts and concerns to an adult, including their parents or a trusted teacher or staff member who can support the child.”